"Don't You Understand?" A sermon from Littlefield Presbyterian Church on Isaiah 56:1-7 and Mark 8:1-21, on World Communion Sunday. 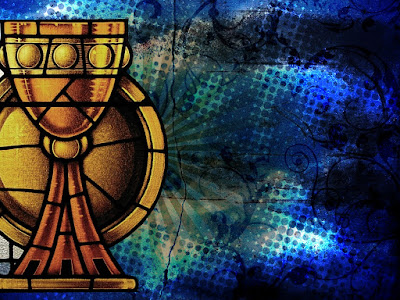 Does this story sound familiar?   Haven’t we heard this story before?
Actually, we have.  In Mark chapter 6, we heard a story of a miraculous feeding of a multitude.  But this time some of the details are different.   A thousand fewer people.   Two more loaves of bread.  And five fewer baskets of left-overs.
Jesus looks around at the huge crowd that came to hear him and says to his disciples, “I’m really concerned for the people.  They’ve been with me for three days now, and they don’t have anything to eat.   If I send them home hungry, they’ll collapse on the way.  Some of them have come from miles away.”
The disciples don’t sound like they’ve seen a crowd get fed miraculously as they answer:  “”But Jesus, where could you get food for all these people, out here in the wilderness?”
The disciples have seen something like this before.  But everything that’s happening is so much bigger and so different from what they’d been expecting or hoping for that they apparently can’t take it all in.

Jesus tells the crowd to sit down.  He takes the seven loaves, gives thanks, breaks them and gives them to the disciples to distribute.   The people in the crowd eat, and they’re satisfied, and then they gather up seven baskets of left-overs before they send the people away.

Over the years, biblical scholars have tried to figure out why Mark tells this second feeding story, when the first one was more impressive, with 1,000 more people in the crowd?  Is he just telling us, “Jesus did it again”?
There are some interesting details in the two stories.  In the feeding story in chapter 6,  Jesus told the 5,000 people to sit down, and they sat down on the green grass.  In the Galilee, grass grows quickly in the spring, but once the rains stop in May it gets scorched by the fierce sun.  So, according to N.T. Wright, the earlier feeding took place around the time of the Jewish Passover.[1]   Some scholars have suggested that the 12 baskets of left-overs  from the 5,000 people symbolize the twelve tribes of Israel,  while the 7 baskets of left-overs may represent his ministry to the wider Gentile world, with—in Jewish folklore—70 nations.   The first feeding story took place on the predominately Jewish side of the lake, and today’s story, they’re on the predominately Gentile side.
Then there’s number symbolism in this story—the 7 loaves and 7 baskets of left-overs are significant.  In Genesis, God gives Noah seven laws, which would apply to Noah’s descendants—all of humankind-- in contrast to the five books of Jewish law. [2]    In Deuteronomy there’s a contrast between the Hebrew people with the seven nations of Canaan. [3]  According to William Placher, first-century readers, who were fascinated by number symbolism, would have read this passage and said, “This time Jesus is feeding Gentiles.[4]
In the early church Mark was addressing, there was a major controversy about who was included and the relation of Jewish and Gentile Christians, so I think Mark is telling us in this story that Jesus came to feed Gentiles as well as Jews.
But there’s something else—a theme that becomes more pronounced in the next episode.  Even thought the disciples had witnessed the feeding of 5,000 people, when Jesus told them they needed to feed the 4,000 people, it apparently didn’t occur to them to say, “You know, that thing you did to feed the crowd on the other side of the Sea of Galilee—could you do it again?”
After they feed the 4,000 people and send them away, immediately Jesus gets into the boat with his disciples and they cross the lake, back to Jewish territory.  The Pharisees come and begin to argue with Jesus, asking him for a sign from heaven, because they want to test him.

So Jesus and the disciples get back in the boat and cross to the other side.  Now the disciples had forgotten to bring any bread.  They had only one loaf with them in the boat, and they’re worried about the scarcity.
Jesus cautions them, saying, “Watch out—beware of the yeast of the Pharisees and the yeast of Herod.”  The disciples say to one another, “It’s because we don’t have any bread.”
Jesus hears them and says, “Why are you talking about having no bread?  Do you still not perceive or understand?  Are your hearts hardened?  Do you have ears, and fail to hear?  And do you not remember?  When I broke the five loaves for the five thousand, how many baskets full of broken pieces did you collect?”  They said to him, “Twelve.”
“And the seven for the four thousand, how many baskets full of broken pieces did you collect?” And they said to him, “Seven.”
Then Jesus said to them, “Do you not yet understand?”

For a lot of us, it is hard to understand.  We’re afraid we don’t have enough bread to share with those in need.    We worry we don’t have enough money.  We hear get confused by “the leaven of the Pharisees”—the message of those who want God to set up a kingdom that’s about observing the law with great strictness,  rather than the kingdom of love and justice that includes all the people Jesus wants to include.
The kingdom of God is much wider and more gracious and inclusive than we might have imagined.
Do we understand?  Can we see it?   Can we hear it?
Listen to how Jan Richardson describes it in  “And The Table Will Be Wide”:
And the table will be wide.
And the welcome will be wide
And the arms will open wide to gather us in.
And our hearts will open wide to receive.
And we will come as children who trust there is enough.
And we will come unhindered and free.
And our aching will be met with bread.
And our sorrow will be met with wine.

---
Thank you to Jan Richardson for permission to quote her work.  Please check out her blog at:  http://paintedprayerbook.com

Posted by RevFranMusings at 1:44 PM