"Courage for New Vision". A sermon on Mark 10:46-52 and Isaiah 43:18-21 for Reformation Sunday at Littlefield Presbyterian Church. 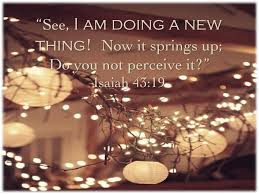 One of the major themes in Mark's gospel is how spiritually blind the disciples were.  Last week we heard Mark's account of how James and John were so spiritually blind that, in their grasping for worldly privilege, they asked Jesus to let them sit on his right and left sides in glory.  They didn't seem to know there was anything wrong with their vision.
In today’s gospel lesson, we find Bartimaeus sitting by the side of the road, begging for his living.  He doesn't have a perfect understanding of who Jesus is.  But he knows what he needs.  Even though Bartimaeus is physically blind, he's clearly focused on what he wants more than anything else in the world.  He wants to be able to see.   And so, when he hears that Jesus of Nazareth is coming down the road, Bartimaeus calls out, "Jesus, Son of David, have mercy on me!"

Posted by RevFranMusings at 6:06 PM