"Why We Can't Wait," a sermon on Luke 13:10-17, preached at Westminster Presbyterian Church in Detroit 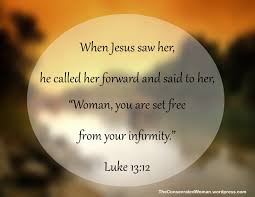 The story we just heard goes straight to the heart of Jesus’ mission as proclaimed in Luke’s gospel.  Earlier in the gospel, in chapter 4, Jesus was also in a synagogue on the Sabbath when he first announced his mission, describing it in terms of human liberation and justice and abundance: “The Spirit of the Lord is upon me, because he has anointed me to bring good news to the poor.  He has sent me to proclaim release to the captives and recovery of sight to the blind, to let the oppressed go free, to proclaim the year of the Lord’s favor.” (Luke 4:18-19).

In today’s reading, the theme of liberation resonates strongly. When Jesus sees the woman, he calls to her and says, “Woman, you are set free from your ailment.” Later, when Jesus debates the leader of the synagogue and asks, “Should not this woman be set free from her bondage on the sabbath day?”  he is drawing directly from Deuteronomy 5, the version of the commandment that connects Sabbath rest to Israel’s liberation from slavery in Egypt.
The synagogue leader was indignant because Jesus had healed on the Sabbath, and said, “There are six days for work. So, come and be healed on those days—not on the Sabbath.”  But Jesus remembers that the Sabbath law commemorates Israel’s liberation, so he interprets it to be a day for enacting liberation in the present.  To those who want the woman to wait, he says, “You hypocrites! Doesn’t each of you on the Sabbath untie your ox or donkey from the stall and lead it out to give it water?  Should not this woman, a daughter of Abraham…be set free on the Sabbath day from what has bound her?”

In his 1964 book, Why We Can’t Wait, Dr. Martin Luther King Jr writes about 1963 as a pivotal year in the American Civil Rights movement.  He includes his famous “Letter from Birmingham Jail,” which is a call for urgency.
Dr. King wrote the letter as a response to eight local white clergymen who had criticized his activities in Birmingham and appealed for a more patient and restrained approach to advocating for civil rights. The "Letter" expresses King's deep disappointment with "the white moderate," who "paternalistically believes he can set the timetable for another man's freedom."

The gospel story we heard today is not just a healing story. Luke doesn’t really include details about the healing itself. I agree with one of my colleagues that, at its core, it's a story about what God intends. It's about the urgency of seeing God's intentions brought to pass without delay.[1]
The primary argument of Dr. King’s “Letter” still speaks to us today, which is why in 2018 the 223rd General Assembly of the Presbyterian Church (USA) began a process toward amending the Book of Confessions to potentially include the letter.

The synagogue leader in today’s gospel story objects to healing this woman on the Sabbath.  Her condition isn’t life-threatening. She’s learned to live with it over almost two decades. So he doesn’t see why she couldn’t just wait a little while longer.  The synagogue leader has misunderstood the basic intention of observing the Sabbath.
But Jesus reveals a deep logic for why the woman should be restored now. According to Deuteronomy, the Sabbath offers a weekly reminder of how much God values freedom and detests injustice:
“Observe the Sabbath day and keep it holy, as the Lord your God commanded you. Six days you shall labor and do all your work. But the seventh day is a sabbath to the Lord your God; you shall not do any work -- you, or your son or your daughter, or your male or female slave, or your ox or your donkey, or any of your livestock, or the resident alien in your towns, so that your male and female slave may rest as well as you.  Remember that you were a slave in the land of Egypt, and the Lord your God brought you out from there with a mighty hand and an outstretched arm; therefore, the Lord your God commanded you to keep the sabbath day.”[2]
The original intention of the Sabbath, according to Deuteronomy, is to provide relief, even if only temporary, from any system that would deny a person -- or any part of creation -- a share of rest, peace, wholeness, dignity, and justice.  So, when the synagogue official says, "Wait just one more day." Jesus answers, "No. The Sabbath is a good day for setting people free. In fact, the purpose behind the Sabbath -- the value God places on wholeness – makes it necessary that I do this now. We can't wait."
In Luke 13, Jesus reaffirms what his scriptures have taught him.  As Matt Skinner puts it, “to perpetuate injustice is to defile the holiness of the weekly Sabbath day that God ordained. To deny freedom is to offend the God of the Exodus. It's because of who God is that Jesus can't wait.”

Now, the white religious leaders whom Dr. King addressed in his “Letter from Birmingham Jail” reflected the views of a majority of American society at the time. One survey from 1964 found that 63% of Americans agreed that “civil rights leaders are trying to push too fast” and 58% agreed that the actions of people of color have, “on the whole, hurt their cause.”[3]

Dr. King criticized white faith leaders and churches that perpetuate injustice by hiding behind theologies that expect God’s blessings to come only in the future.  What’s the old saying, “There’ll be pie in the sky, in the sweet by and by, after you die:

So, why do some people have a sense of urgency about working for justice, while others just don’t?   Why are some people ready to confess and repent of what the Rev. Jim Wallis calls “America’s original sin,”[4] while others refuse to acknowledge any ways they may benefit from privilege? Why do some react with defensiveness, silence, or argumentativeness when the conversation makes them feel uncomfortable?

I think much of the resistance comes from fear.  In the church, whether it’s local congregations or presbyteries or denominations, some are afraid of causing conflict…or alienating people, who may leave the church or withhold financial support. Some are afraid of change and becoming a different kind of church that they can’t yet imagine.
Twenty years ago, when I was fairly new to the presbytery, I was part of the Presbytery’s Anti-Racism Team, which was commissioned and went through a lot of intensive training, to try to deal with structural racism in the presbytery, in response to some events of the time. Over the years, there was pushback, and eventually we no longer had a Presbytery Anti-Racism Team.   Our Presbytery is struggling again…still with racism.  It’s time to do the work that leads to liberation and healing. We can’t wait.

This past week, The New York Times published “The 1619 Project” to re-examine the legacy of slavery in the United States and timed for the 400th anniversary of the arrival in America of the first enslaved people from West Africa.[5]  The project’s essays trace links from America’s slave-owning history through the Jim Crow era and into persistent racial inequalities today. The project is an attempt to correct America’s historical ignorance about the causes of contemporary injustice, to place “the consequences of slavery and the contributions of black Americans at the very center of the story Americans tell ourselves about who we are.”[6]

Predictably, there has been a backlash from some people who hold onto a particular vision of patriotism that centers on the ideal of white innocence, who are angry and uncomfortable with the reporting and insist that structural racism is a myth.[7]
Look around our region and our nation.  Just this week a candidate for City Council in Marysville, Michigan made national headlines with her statements about her conviction that their city needed to remain a mostly white city, and that interracial couples are breaking God’s law. Does she think she’s a racist?
Our national government has policies and practices that dehumanize immigrants and those who seek asylum. We have elected officials who promote hatred and division for political gain.
Young people and others around our nation tell us they’re afraid because of gun violence…and they want to feel safe.  The list could go on and on…

Talking about injustice and racism are hard, but necessary.  We can’t wait.
We need to learn how to talk respectfully and constructively with one another.  We need to learn to listen to one another to build true understanding and empathy.
A lot of white people don’t like to think that we’ve benefitted from white privilege, or that we do or say racist things without even being conscious of it. And yet, some of us have committed ourselves to gather to discuss books like Waking Up White[8] or White Fragility[9] and have felt challenged and encouraged to continue to grow as anti-racists. We have a number of other excellent resources available that could be the basis of these conversations, like Ibram Kendi’s Stamped from the Beginning and Ijeomo Oluo’s So You Want to Talk about Race.

We need to learn how to be together, to be honest and respectful and kind with one another, and find ways for the healing we need to begin, so we can all be set free from whatever has bound us.  We need to work together and live further into Beloved Community together.
We live in such a broken, hurting world. We look around our cities and the world, and it can feel overwhelming.  But we follow Jesus, in his Way of love and justice. We are called to carry out his mission of healing and liberation.
Part of the good news is that we are not alone.  We have been baptized into God’s family and are blessed to be part of congregations where we can be nurtured and encouraged and challenged to grow in love and faith. And we have resources in the presbytery. For those who are seeking learning opportunities, you might check out Table Setters groups in our presbytery or the group that’s forming under the Rev. Kevin Johnson’s leadership.

As a diverse, multicultural congregation, Westminster Church has some unique opportunities to practice living into Beloved Community and to embody God’s love and justice in and for the world.

We can’t wait.  In the words of our Presbyterian “Brief Statement of Faith,” the good news is that, “in a broken and fearful world, the Spirit gives us courage to pray without ceasing, to witness among all peoples to Christ as Lord and Savior, to unmask idolatries in Church and culture, to hear the voices of peoples long silenced, and to work with others for justice, freedom, and peace.…
“With believers in every time and place, we can rejoice that nothing in life or in death can separate us from the love of God in Christ Jesus our Lord.”[10]
Praise be to God!
Amen!

[8] Debby Irving, Waking Up White.  Elephant Room Press, 2014. This book was commended to the Presbyterian Church (USA) by our previous Co-Moderators of the General Assembly.

[9] Robin DiAngelo, White Fragility: Why It’s So Hard for White People to Talk About Racism. Beacon Press, 2018.  For a 20-minute introduction to DiAngelo’s work, you can watch the video of her work with a Methodist Church group:  http://www.gcorr.org/video/vital-conversations-racism-dr-robin-diangelo/

[10] Presbyterian Church (USA), “Brief Statement of Faith” (1990), in Presbyterian Book of Confessions.
Posted by RevFranMusings at 2:41 PM No comments: