"Refusing To Be Enemies" Sunday's sermon on 1 Kings 21 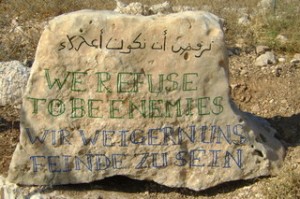 As one of my colleagues points out, it’s an irony of the human condition that power weakens those who are most eager to exploit it.  The powerful are vulnerable not only to those who would take their power from them, but also to the corrosive force of their own greed.  In the Greek mythology, King Midas loves gold so much that he wishes that everything he touches would turn to gold.  His greed robs him of the things that are essential for living.  Food and drink turn to gold at his lips, and he loses his beloved daughter in the very act of embracing her.  From the myth of King Midas, we can learn that when we get what we covet or desire, it may not bring us the happiness or security that we had hoped for.[1]
In the story we just heard from ancient Israel, Naboth the Jezreelite had a vineyard in Jezreel.  The Jezreel valley is very fertile, and the name literally means “God planted.”  This land has been passed down through the generations in Naboth’s family.
Now, Naboth’s vineyard is beside one of the palaces of King Ahab of Samaria.  The city of Samaria was the capital of Israel—the Northern Kingdom—for about 200 years, and Ahab had a palace there, and also this one in Jezreel.  Ahab wasn’t satisfied with his large palace.  He coveted Nabor’s vineyard, and wanted to turn it into a vegetable garden.
So Ahab goes to Naboth and  says, “Give me your vineyard, so that I may have it for a vegetable garden, because it is near my house.  I will give you a better vineyard for it.  Or, if it seems good to you, I will give you its value in money.”
But Naboth said to Ahab, “The LORD forbid that I should give you my ancestral inheritance.”
Now, in a society where people move from house to house, or relocate to another city or another state for work, it may be hard to understand why this was such a big deal for Naboth.  Although, as a gardener, I know how I have stewarded the soil where I plant vegetables and flowers.  I’ve planted a tree and some shrubs that have taken time to grow.  So I have a bit of an understanding.
For Naboth and his family, his land was his inheritance from his ancestors, which they understood as a gift from God, which he is to pass down to his children.   According to the faith of Israel, even the king didn’t have the right to confiscate the land of an Israelite farmer.[2]
So Ahab goes home to the palace sullen and resentful because Naboth wouldn’t give up his land.  He laid down on his bed, with his face to the wall, and he refused to eat.
Queen Jezebel asks him, “Why are you so depressed?”  Ahab tells her that Naboth wouldn’t give him what he wanted.   So Jezebel decides to take matters into her own hands.   She writes letters in Ahab’s name and uses his royal seal.  And she arranges for two scoundrels to bring false witness against Naboth.  Based on this false testimony, Naboth is executed—stoned to death.
As soon as Jezebel heard that Naboth was dead, she told Ahab to go and take possession of the vineyard.   When he got to the field he’d wanted so much, what did he encounter?  Satisfaction?  Joy?  Peace?
No.  Instead, he met Elijah the prophet there, who delivered a word from the LORD about Naboth’s death.  “I have found you.  Because you have sold yourself to do what is evil in the sight of the LORD, I will bring disaster on you.”  The story tells us that Ahab’s household would also suffer consequences for how he and Jezebel had used the system to oppress someone less powerful.
The passage ends with God saying to Ahab through Elijah, “You will reap what you have shown.  You have brought disaster, and you suffer disaster.”
Is this a satisfactory ending?  Naboth is dead.  The livelihood and economic security of his family is gone.  Something terrible has happened, and we don’t see a way to make things right.  But we don’t want to leave saying simply, “Power corrupts and absolute power corrupts absolutely.”  We want more from God.  We want justice.   At least I do.

I was working on this text earlier this week, and I remembered a chapter in a book by the Rev. Dr. Mitri Raheb, in which Mitri connects the story of Naboth’s Vineyard to Daher’s vineyard.[3]  I pulled out the book and re-read the chapter and wondered what has happened since the book was written almost 20 years ago, so I did a Google search.  It was then that I made the connection with this and the notice I’d read in our church bulletin about an event in Ann Arbor yesterday.  Daoud Nassar, grandson of Daher Nassar, and founder of The Tent of Nations, was speaking at a Lutheran Church.  The scripture passage… the book by Mitri Raheb, the pastor of Christmas Lutheran Church, whom I’ve met several times… and Daoud Nassar speaking in Ann Arbor.  It all came together.

Daher Nassar was an Arab Christian from Lebanon.  He and his family left Lebanon at the beginning of the 20th century to start a new life, and settled in Bethlehem.  He bought a piece of land on one of the hilltops.
Daher and his two sons began to cultivate the land.  It was full of stones, thorns, and thistles.  The family remembers how much hard, sweaty labor it took over the years to clear it.  They planted thousands of trees:  grape vines, pomegranates, almonds, figs, and olives.  Over the years, the whole family worked hard and joyfully.  But then, toward the end of the 1920’s the conflict between Jews and Arabs in Palestine began to cast a long shadow, and things continued to get worse.   But the ties of the Nassar family to the land they love grew stronger.
Daher’s sons grew up, and one of them moved onto the land and lived in a cave to be on the site.  The land was so important to him that he was willing to sacrifice a comfortable life living in Bethlehem and even stayed unmarried.  He lived in the cave on the land for 35 years, until he died.  Daher’s other brother, Christian evangelist, died, leaving his wife and 9 children to try to cultivate as much of the land as they were able.
In 1991 the Daher family learned that the Israeli military government intended to confiscate most of their land.   The family has all the original registration papers and records of the taxes they have paid, so they have been fighting ever since to keep their land.
Over the years, the Israelis have built settlements on other lands they have confiscated until the Nassar farm is surrounded by five settlements.  The government has used legal action, force, and financial pressure to try to confiscate the Nassar land.

As Daoud told us yesterday, there are several possible responses to oppression and occupation.  They might respond with violence… or resignation… or by choosing to leave the land and emigrate.
But they respond by saying:  We refuse to be victims.  We refuse to hate.  We live our faith.  We believe in justice.
A large stone at the entrance to the farm proclaims in several languages:  “We refuse to be enemies.”

The story of Naboth’s vineyard in First Kings shows injustice as a dis-ordering of relationships:  to the land, between neighbors, and of the powerful to those who don’t have power.   Justice and righteousness unravel when we lose sight of who we are in relation to God, and when we fail to see our neighbor as a beloved child of God.
In all of the Old Testament, the office of prophet was to intervene wherever a responsible authority breaks down, to bring a word from the LORD.  As Mitri Raheb reminds us, persons and institutions who are in this prophetic tradition can not be silent in the face of Israel’s policy of land confiscation.  Nor can the church of Jesus Christ, which honors the prophetic inheritance, avoid intervening when a nation abuses its mandate.
In response to the attempts to confiscate Daher’s vineyard, Christians from several different denominations joined with Muslims and Jews from the peace movement, and several committees were set up.  One committee worked on the legal implications.  Another committee worked to get a used tractor so they could help the family to cultivate the land.  Another committee got a variety of young trees and other plants, and the planting was done by Christians, Muslims, and Jews together, by near neighbors as well as Europeans and others.  Another committee began doing public relations.  And another committee studied how the land could be best used for not only the Daher family but for others as well—especially the unemployed.
The Tent of Nations organization was formed to carry on the work.  Their mission is about transforming their pain into a constructive power that leads to a better future… protecting the land… building a bridge between people and people—making the land a place of encounter for different people.  It’s about building a bridge between LAND and PEOPLE.
This is an ongoing struggle.  At one point, settlers took out 250 of the Nassar’s olive trees, but a Jewish human rights group from the U.K. replaced them.
The Nassars can’t get permits to build anything on their land, so they have renovated the caves and dug underground.  They can’t bring in electricity, so they put up the first solar panels in Palestine and have plans to build a wind turbine, which will need to be on wheels, as it can’t be permanent.
There is no running water on the land, and Israeli law makes it illegal for the Nassars to drill for water on their land, so they depend on rain water collected in cisterns.  A volunteer church group developed a system for them to convert gray water for irrigation, and they use compost toilets.
Volunteer groups come to help on agricultural and other projects.
The Tent of Nations holds a summer camp for kids for 2 weeks in July that sounds like it has some similarities to our Peace Camp.
In a nearby Muslim village, Daoud’s wife and others are developing programs to empower women, teaching English language, computer skills, first aid and health, and also teaching care of the environment and the importance of recycling.[4]

As Daoud Nassar proclaims, the cross was not the end of the story.  The story goes on.  We are all God’s Easter people.  Palestinian Christians in the Bethlehem area who live their faith by putting faith, love, and hope into action are embodying God’s love and making a prophetic witness to confront injustice and evil.  Our Christian brothers and sisters inspire and challenge us to join hands with them and be in solidarity with them, to work together as we live into God’s kingdom of justice and peace.
Jesus came to live among us, full of grace and truth, proclaiming good news for all people—a gospel of repentance and transformation.  Our faith calls us to embody God’s love… to put our faith, hope, and love into action… to make a prophetic witness to confront injustice and evil.
Thy Kingdom come, Lord.
Thy Kingdom come!
Amen.