Can blind men and elephants and even trolls help us to live and learn together? 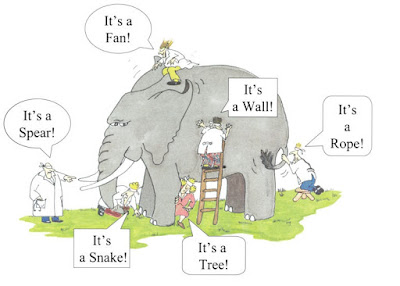 Some of you know that I’m part of several interfaith groups on Facebook that work to build relationships and bridges of understanding.  In these groups, I am in regular conversation with Muslims, Jews, Buddhists, and some who identify with other faiths.

From time to time we get a “troll,” which in internet slang is a person who “sows discord by starting arguments or upsetting people, by posting inflammatory, extraneous, or off-topic messages in an online community with the deliberate intent of provoking readers into an emotional response… often for their own amusement." [1]

In a group that’s trying to build interfaith bridges, people tend to be very welcoming and open and try to give constructive feedback when someone starts telling group members that those from different religious traditions from the one posting won’t be “saved” or that they need to convert to their tradition.  Sometimes it’s hard to tell for a while whether someone new is a “troll” or someone who is very sincere and is from a religious tradition that has taught them that they need to try to convert people who have different beliefs, to “save” them for heaven/paradise and to save them from “hell”.  Maybe they truly don’t understand the purpose of the group.  Perhaps they do have some understanding of the group’s purpose, but they’re so convinced that their beliefs are the only right ones that they feel righteous in telling people that their beliefs are wrong or their scriptures are inferior.  After all, in their mind, they have the right beliefs and follow the right religion, and they want that for everybody.

One of the books I’ve been reading lately is The Interfaith Alternative: Embracing Spiritual Diversity, by Steven Greenbaum.  I’m hoping to review it more fully later.  Fundamental to this book is the concept of “right belief,” which the author says has been the organizing principle of our spiritual paths for a very long time.  If many of us and many of our religious communities believe that we have the only way, that we are the only chosen people, and that we follow the only right spiritual path, the result can be  distrust, hatred and violence.

In this book, Greenbaum offers an Interfaith alternative, which respects each spiritual path and recognizes what we all share in common:  the call to love and to be loving and compassionate.

Greenbaum suggests “Maybe dividing ourselves into righteous pockets of spiritual belief is not the best way to bring about love.”  We humans are great at building walls between ourselves and those who are different in some way. For too long, too many of us have been stuck in a paradigm that demands that we search for or protect the one “right belief,”   I think Greenbaum is right when he says “Who has the right belief?” is the wrong question, and that we need to be more concerned with a different question: “How do we live as a result of our beliefs?”  We need to stop arguing about which religious tradition is “best” or “right” or “true”, and find ways to be in conversation with one another and to work together to honor God/Allah/Hashem or whatever we call the One we worship, through works of compassion, mercy, and justice.

For those who struggle with the question of “Who is right?”and the desire to define God,  Greenbaum offers several helpful ways of considering an alternative.  One of them is in the Indian fable of “The Blind Men and the Elephant.”  We had a picture book version of this at our house when my son was young, and I bought a new copy recently.  The story originated in the Indian subcontinent and is widely known in many traditions, including Buddist, Jain, Hindu, and Sufi Muslim traditions.

In various versions of the story, a group of blind men (or people in the dark) touch an elephant to learn what it’s like.  Each one feels a different part.  In some versions, their differences get violent, as each one is convinced he has it right and tries to dominate.  In some versions of the story, they stop talking, start listening, and work together to “see” the whole elephant.

Isn’t it time we all become more conscious and more intentional about this?   Isn’t it time we all stop trying to defend our one right truth and find ways to be in conversation with those who may have experienced a different truth?  And even more importantly, isn’t it time for us to remember the call of all our religious traditions, the call to love and compassion?  We live in such a broken and hurting world.  Isn’t it time to work together to make the world more peaceful and just?

Posted by RevFranMusings at 10:02 AM