"Seeds of Faith and Hope." A sermon from Littlefield Presbyterian Church. 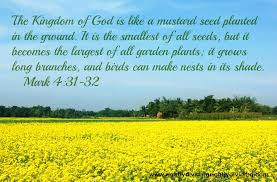 "Seeds of Faith and Hope"

“The Kingdom of God is as if someone would scatter seed on the ground, and would sleep and rise night and day, and the seed would sprout and grow, he does not know how.  The earth produces of itself, first the stalk, then the head, then the full grain in the head.  But when the grain is ripe, at once he goes in with his sickle, because the harvest is come.”
Karoline Lewis suggests that our lives are full of parables.  I think she’s right when she says that Jesus knew this, which is why he told parables to his followers.
“With what can we compare the kingdom of God, or what parable will we use for it?”
Parables are a way to try to make sense of things in life, as we struggle for a way to be in the world.
Jesus has announced the arrival of God’s kingdom, but to skeptical eyes, it seems that nothing has changed.
Mark uses Jesus’ parable of the growing seed to encourage those in charge of the early church.   Some of these congregations were planted under adverse—even dangerous—conditions.
Most scholars agree that Mark’s gospel was the earliest written of the four gospels.  It was probably written around 70 C.E., shortly after the Romans destroyed the temple in Jerusalem, toward the end of the reign of the Emperor Nero.  It reflects a time of imminent persecution for those who professed the Christian faith, and Christians in Rome suffered particularly.
Mark’s gospel was written in a time of high anxiety.  Church leaders felt vulnerable and helpless.  So, it must have sounded like good news to be reminded that seeds are small and vulnerable, but can sprout and grow even in tough times.
Chapter four in Mark has a series of seed parables, which teach us that God’s rule is something hidden… indirect… and surprising.   They tell us that the kingdom is near and breaking into the ordinary world where we live.   Mark wants us to know that God’s purposes—though hidden—are still present.  We need to move toward them—live into them with confidence.

Mark gathers Jesus’ seed metaphors to help us discern God’s presence and work in small, surprising places.  In the parable of the growing seed, the seeds are a good image for how growth can happen in ways that are beyond our control or comprehension.
In the parable of the mustard seed, a tiny mustard seed is contrasted with the size of the final tree.  Now, the fact is that a mustard seed doesn’t really grow into a tree.  The mustard plant is an annual herb that normally grows no more than six feet in height and would be considered a shrub, rather than a tree.  It’s in the imagination of the parable that a mustard seed can produce a tree with branches…and be similar to the imperial trees that symbolize kingdoms.
The people in the crowd gathered that day in Palestine thousands of years ago were likely familiar with the Ezekiel passage we heard today, in which images of tall, majestic cedar trees are symbols used to encourage people of Israel’s future greatness.  This would have been a comfort to Ezekiel’s original audience, in exile in Babylon.  The image of the noble cedar would have served to help encourage an oppressed people.
In the parable of the mustard seed, Jesus makes an allusion to Ezekiel’s message and other Old Testament tree of life images, in which birds of the air nest in its branches, but re-works it. In Jesus’ parable, God’s promised action comes after everything worldly that claims and seems to be of great promise has failed.
The humble mustard seed that grows into a scruffy shrub may seem like an odd image for Jesus to have chosen, when he could have used the majestic cedar to make his point.  But Jesus wants us to know that things are different in the kingdom of God when it breaks into our ordinary daily lives.  The kingdom of God has its own time… and its own rate of growth… and happens in unexpected, surprising ways.
The mustard seed was a common image in ancient Palestine for “the smallest thing.”  Like the humble mustard seed that grows into a scruffy shrub, the followers of Jesus are a bunch of ragged folk-- full of doubts and fears, unable to comprehend much of what Jesus says or does.

We look at the news and we see images of children being torn away from their parents, children in cages.  We hear government officials quoting a scripture verse to defend policies of arresting people who are fleeing violence and danger and separating families at the border.
We listen to the stories of people impacted by poverty and hear what it’s like to live without running water in your home and what it’s like to try to get or hold a job in Detroit if you can’t afford a car and insurance.
Some of you have told me you struggle with despair and have a hard time seeing the hope. Maybe some of us can relate to what Rev. Jill Duffield wrote in The Presbyterian Outlook: “What kind of people have we become?" We are doomed. I am living in a dystopian novel.”[1]
But the scripture texts the lectionary gives us for this Sunday tell us that God does not see things as we do. They say that God looks upon the heart, not outward appearances. They say: “We walk by faith and not by sight.”  They say: “We are always confident.” The texts say: “The love of Christ urges us on. We don’t live to ourselves. We regard no one from a human point of view. Anyone who is in Christ is a new creation.” The texts say: “The kingdom of God is like a mustard seed, tiny, insignificant, vulnerable--but explosive, with the potential and promise to nurture, shade, hide, protect the birds of the air and the beasts of the land…”
So, I’m with Jill Duffield when she says, “I refuse to live as if I am a character in a dystopian novel. I won’t give up that easily. The texts won’t let me.”[2]
There’s a tiny mustard seed of faith that won’t give up, that keeps sprouting through the cracks of our fatigue and doubt and cynicism and fear and hard-heartedness.
This past week, we heard several powerful people invoking Romans 13 to say the Bible commands us to “obey the laws of the government because God has ordained them for the purpose of order,” and then we heard from many parts of the faith community in response.[3]  Since then, for those with “ears to hear,” it’s been like a Bible study on social media.
We heard from biblical scholars who explained how the verse from Romans was distorted when it was taken out of context. The Rev. Dr. Margaret Aymer Oget and other scholars reminded us that we need to consider the verse in the larger context, in which the apostle Paul argued that all commandments are summed up in the teaching “Love your neighbor as yourself.” (Romans 13:9)[4]   The scholars have been reminding us that Paul continued, saying, “Love does no wrong to a neighbor. Therefore, love is the fulfilling of the law.” (Romans 13:10)
Biblical scholars and others have been telling us that the first two verses of Romans 13 that say, “Let everyone be subject to the government authorities” have been quoted out of context over history to support laws and policies we now consider to be unjust and inhumane.
At various times, very unjust and inhumane policies were the law of the land. For example, chattel slavery was the law of the land, and fugitive slave laws required people to return refugees from slavery as property to their "owners." People of faith and principle who provided assistance to them were breaking the law.  In the 1980’s, the same verses were used as proof texts against the end of Apartheid in South Africa.

The issue of immigration in our country is complicated and requires the rigorous debate in which we are now engaged. Those who wish to invoke a biblical ethic need to be guided by this test of love. There is nothing loving about prying children from their parents’ arms when families are at their most vulnerable.
Over the past few days, we have heard from various parts of the church.  The Catholic Bishops and others have been saying you can’t be pro-life and against immigrant children.[5]  We’ve heard from Evangelicals and mainline denominations and the National Council of Churches and the National Association of Evangelicals, denouncing the separation of families and speaking for just immigration policies.[6]
These voices from around the church have also been reminding us that the Bible shouldn’t--and can’t--be used to argue against immigration. Passages from Exodus, Leviticus, Deuteronomy and the prophets teach us to care for the stranger and the immigrant: “When an alien resides with you in your land, you shall not oppress the alien. The alien who resides with you shall be to you as the citizen among you. You shall love the alien as yourself, for you were aliens in the land of Egypt. I am the LORD your God.”[7][8] That’s just one reference, from Leviticus 19, but there are plenty of others.[9]

Like Jill Duffield, like a lot of you, I don’t want to live as if I’m a character in a dystopian novel.  I want to live in faith and hope. So, I want to trust that the reign of God is bursting into history and resting on us.
In the parables we heard today, Jesus once again lifts up the grace and power of God taking the smallest seed and transforming it into a great plant that provides shelter and sustenance for all.
I’ve been amazed and encouraged to read and hear the conversations about what the scriptures and our faith traditions teach us about immigration and how we are called to live. [If you’ve missed this and want to check it out, you could do a Google search of Romans 13 and find all kinds of commentary.  Also, I shared links to a number of the articles on Facebook and, just now, in the footnotes to this sermon.]
I’ve been encouraged by all the interest in looking at immigration and some other issues through the eyes of faith.

I believe Jesus is looking for hungry hearts, for people for whom the world’s answers aren’t satisfying, those who are willing to keep our imaginations open.  Jesus calls us to follow, and
promises: “To you has been given the secret of the kingdom of God.”
Jesus wants us to know that we can trust the forces of God’s mercy and grace and love to bring in the kingdom of God.  Don’t be discouraged by the size of the beginning… or by drought or bad weather.  The kingdom of God will come.
God’s Kingdom of grace and mercy will come, because God creates and gives it. The kingdom of God grows in hidden, mysterious ways.  We can trust God to produce the harvest—in God’s time and God’s ways.
As disciples of Christ, we are called to make a difference in order for God’s kingdom to come on earth as it is in heaven.  With a bit of courage—and a lot of imagination, “looking twice” at the world around us—we can trust that God is at work growing the kingdom in the midst of our ordinary lives—even when we can’t see it.
We are invited to live mustard seed lives until all the birds of the air have a place to make a nest, until every nation cares for the poor, until nobody goes to bed hungry, until there is a lovely shaded place for all to live.
We have been given the secret of the reign of God.  This is the Good News of the gospel.
Amen!

Posted by RevFranMusings at 11:28 AM