"Healing Faith." A Sermon from Littlefield Presbyterian Church on Mark 5:21-43 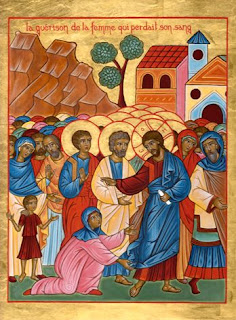 Jesus has just returned from the other side of the Sea of Galilee, in Gentile territory, where he performed an exorcism and interfered with the local swine-based economy.
That region was known as the Decapolis-- a group of ten cities on the eastern frontier of the Roman Empire.  Rome, in an effort to spread its culture and the Imperial cult to the furthest reaches of its territory, had built roads, public buildings and temples throughout the Decapolis. Worship of the emperor was the common bond that linked the ten cities together.
The story of this exorcism and his interference with the swine-based economy is a metaphor for Roman culture and Imperial rule. Mark depicts it as violent, brutal, unclean, and wracked with fear. The local people had begged Jesus to get out of town.

After that, Jesus crosses the Sea of Galilee, and he’s welcomed by a crowd.  In the crowd, Jesus faces a range of human need. As biblical scholars have pointed out, ninety percent of first century Jews lived in desperate poverty. They lived under the occupation of the Roman Empire, and were also oppressed by a cultural and religious system that valued custom and ritual over justice and mercy.
Jesus has been proclaiming the good news of God’s love and the spirit and heart of the law, and crowds keep coming to him.

Today’s gospel lesson is a story of two healings. One of the leaders of the synagogue named Jairus comes and falls down at Jesus’ feet and begs him repeatedly to come home with him and heal his young daughter.  “She is at the point of death.  Come and lay your hands on her so that she may be made well and live!
Jesus sets off to go with him.  A large crowd follows along and is pressing in on him.
But then that story gets interrupted.  As Jesus is making his way through the crowd, he senses that power has gone forth from him, and he turns to find out who touched him.

It wasn’t just the crowd pressing in on him, but a woman—a very specific woman.  This woman had been suffering from hemorrhages for twelve years.  She’d gone to doctor after doctor, and had spent all her money on them, trying the treatments they prescribed.  Who knows what she’d tried?    Perhaps drinking tonics made of vile bitter things… rubbing herself with terrible smelling salves.  But none of it had done any good, and she still bled.
In addition to the effects on her physical health, her bleeding had other profound effects on her life.   It made her ritually unclean.  She couldn’t go to the Temple to worship.  Anyone who touched her, or lay on a bed in which she had slept, or sat on a chair where she sat would be unclean as well.
Imagine the kind of isolation this woman must have experienced over those twelve long years.  Imagine being unable to attend services and rituals in the Temple.  Imagine people shying away from you, being unwilling to touch you for twelve years.  This woman was an outcast.
Unlike Jairus’ daughter, she apparently has no male kinsman to plead her case.
But this woman has heard reports of the power at work in Jesus, and that has given birth to hope and faith.  So—in desperation and great faith—she audaciously and courageously works her way through the jostling crowd and approaches Jesus from behind and touches his garments.
She might have thought, “I don’t need to bother him.  I don’t need to slow him down with a lot of chatter.  All I need to do is touch the edge of his garment.  Then I’ll be healed.”

But things don’t go exactly as she planned.  No sooner does she touch his clothes than Jesus turns around and says, “Who touched me?”
Jesus refuses to let the woman remain invisible.  He insists on personal contact and on drawing the woman into relationship.    And so, the woman falls down before him and tells him the whole truth.
Jesus says to her, ‘Daughter, your faith has made you well.  Go in peace, and be healed of your disease.’”  The New RSV translates this verb in terms of healing.  But, as some scholars note, this translation of the verb fails to capture the sense in which the physical cure results in a fuller restoration.[1]  It might be a better translation to hear Jesus saying, “Daughter, your faith has saved you.”

As we reach the conclusion of the inner story, we can discern that the miracle involves far more than physical healing.[2]  It includes entry into a ‘saving’ relationship with Jesus himself.  The woman is no longer alone.  Jesus calls her “Daughter,” claiming her as family, and restoring her to community.  She is told to “go in peace”—shalom, which involves wholeness, salvation—and healed from disease.

Not only does Jesus not seem to mind that the woman has touched him.  He also doesn’t worry about the ritual purification.  After he sends the woman on her way, healed and whole, he doesn’t stop off at the baths or send the disciples off for a water so he can wash.  It doesn’t seem to matter to him.
For Jesus, there is no such thing as an unclean person.  The society he lives in may try to keep certain people outside of their boundaries, but Jesus keeps reaching out to them.  He keeps welcoming people back inside the circle of God’s love and healing and community.  Time and time again, he welcomes people who have been cast out…or he moves outside the boundary himself, to meet them where they are.
The other story in today’s gospel lesson shows a similar pattern.
Some people come from Jairus’ house to say, “Your daughter is dead.  Why trouble the teacher any further?”
After all, you could hardly ask Jesus to deal with a dead body.  Dead bodies were considered unclean.  Touch a dead body, and you become unclean.
But Jesus overhears and says to Jairus, “Do not fear-- only believe.’  He takes Peter, James, and John and they go to Jairus’ house where they find a commotion.  Mourning has already started, the customary rituals of loud weeping and lamenting.
“Why do you make a commotion and weep?” Jesus says.  “The child is not dead, but sleeping.”  When the people laugh at him, Jesus puts them all outside.  He takes the child’s parents and the three disciples and takes the child by the hand and tells her to get up.  The girl begins to walk.  Everybody is amazed!   Jesus gives them orders not to tell anybody about this, and tells them to give the girl something to eat.

The religious community in Jesus’ day and through much of history has often gotten in the way of healing.  But the gospel story we heard today from Mark tells how God works through Jesus, who is empowered by the Holy Spirit to reach out with a healing touch.

God’s holiness works through Jesus and his followers to spread the life-giving power of the kingdom--the kin-dom-- into the world wherever people are receptive to it.[3]
So…when Jesus welcomes the woman who has been hemorrhaging as “daughter”—a term of endearment-- and touches a dead girl, we have what Marcus Borg has summarized as “The politics of purity” being replaced by “a politics of compassion.”[4]
Jesus deliberately reaches out to the woman, welcoming her back into the human family, back into the community from which she had been isolated.  Instead of avoiding contact with the dead girl, Jesus reaches out and takes her hand and restores her to life.
Mark’s story points to the divisions in society between male and female, between the weak and the strong, the clean and the impure, and the rich and the poor.
Jesus’ disciples marveled that Jesus wants to know who touched him and don’t seem to understand how responsive Jesus is to vulnerability and need.
Perhaps we who are his disciples today have failed to understand that as well. Or maybe we do. How many of us have felt our hearts broken when we see images of families being separated at our border, and discouraged when we hear some people using their faith to justify those policies. There were hundreds of thousands of people in the streets around the country yesterday to make a statement that “families belong together.” Last weekend there were thousands in Washington, D.C. for the Poor People’s Campaign. I believe there is a growing movement of people with a growing understanding of how we are all family in God’s kin-dom.

Just four days before he was struck down by an assassin’s bullet, the Rev. Dr. Martin Luther King preached a sermon at the National Cathedral in Washington. He invited his listeners to place their struggles and calling in the context of God’s ordering of the universe.  Dr. King suggested that whatever differences we may experience, yet our mutual vulnerability and humanity unites us more deeply.
“We are tied together in the single garment of destiny, caught in an inescapable network of mutuality. And whatever affects one directly affects all indirectly. For some strange reason, I can never be what I ought to be until you are what you ought to be. And you can never be what you ought to be until I am what I ought to be. This is the way God’s universe is made. This is the way it is structured.”[5]

Even when we are tempted to despair, Jesus reaches out in an invitation of pure love…an invitation to bring our own bleeding bodies and spirits to the only One who can offer us true healing…the only One who can welcome us into true community when our ties with that community have been broken.
Jesus reaches out and invites us to follow-- to look at the suffering ones in our midst, to listen to their stories, to reach out and touch them, and lift them to their feet.  By example, Jesus invites us to call them “Daughter” … “Son” … “Sister” …  “Brother” -- family.
Just as Jesus called Jairus’ daughter to rise up, he invites us to stand up for love and justice. The Greek words used for the resurrection of Jairus’ daughter and of Jesus is God’s way of telling us to get up and stand up for God’s righteous and justice. By lifting up the lowly and providing for “the least of these,” we will strengthen and revive our communities and our nation, and we will be living more fully into God’s kin-dom.
The good news of the gospel calls us to live out our faith in ways that invite all, not just some, to be touched and healed by God’s love… and all, not just some, can become a real part of the community.
The good news of the gospel calls us to become a richer, more whole community—a community that in its wholeness truly embodies the shalom that Jesus bids the woman when he says “your faith has made you well…go in peace…”
And so… may we never be content to rest within our safe walls, but instead, may we move out beyond the boundaries to where ministry with Jesus takes place, where we receive God’s blessings, and where we can be a blessing to those who do not know that God’s love is even for them.
May our faith make us well and whole. May we walk in the way of peace…shalom…salam.
Amen!

[1] Donald Juel, Mark.  Augsburg Commentary on the New Testament (Augsburg, 1990),  p. 84.
[2] James L. Bailey and Lyle D. Vander Brock, Literary Forms in the New Testament: A Handbook (Westminster/John Knox, 1992), p. 142.
[3] Ibid.
[4] Marcus Borg, Meeting Jesus Again for the First Time: The Historical Jesus and the Heart of Contemporary Faith (Harper, 1994), p. 58.
[5] “Remaining Awake Through the Great Revolution,” from A Knock at Midnight, can be accessed at the following site:  https://kinginstitute.stanford.edu/king-papers/publications/knock-midnight-inspiration-great-sermons-reverend-martin-luther-king-jr-10


Posted by RevFranMusings at 3:27 PM