"Sabbath for the Sake of Life." A sermon on Mark 2:23 - 3:6 from Littlefield Presbyterian Church 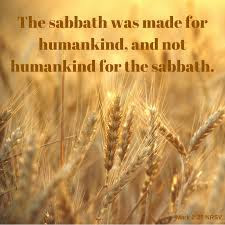 "Sabbath for the Sake of Life"

Mark’s Gospel moves at a fast pace. In the first chapter, Jesus is baptized, tempted, announces his ministry, calls his disciples, casts out an unclean spirit, heals many people, goes out preaching the gospel, and cleanses a leper. People are coming to him from all over.
Then, we see the beginnings of controversy. When the scribes of the Pharisees see that he’s eating with sinners and tax collectors, they question his disciples about who Jesus is associating with. People question why Jesus’ disciples aren’t fasting.

In today’s gospel lesson, Jesus is going through the grain fields, and his disciples begin to pluck heads of grain. The Pharisees say to him, “Look, why are they doing what is not lawful on the Sabbath?”
Jesus doesn’t deny the accusation. Instead, he appeals to a historical precedent, saying, “Have you never read what David did when he and his companions were hungry and in need of food?” He refers to a time when King David did something sacrilegious-- eating the bread of the Presence, that only priests were permitted to eat. This historical precedent doesn’t have anything to do with keeping the Sabbath, but seems to justify the idea that law gives way to need.

At the synagogue, people were watching to see if Jesus would heal the man with the withered hand on the Sabbath, so they could frame a charge against him. Jesus asks, “Is it lawful to do good on the Sabbath, or to do evil?”  To save life or to kill?”
Mark tells us that Jesus was deeply upset at their hard-heartedness, and looked around at them angrily. Then he healed the man’s hand. The Pharisees went out right away and began to plot with the Herodians against Jesus, trying to find a way to destroy him.
Jesus said, “The Sabbath was made for humankind-- not humankind for the Sabbath.”
As theologian William Placher points out, Jesus wasn’t breaking with Judaism, but could have been quoting a number of rabbinic texts. The line of division here runs not between Christians and Jews-- but between those in any tradition who lose sight of the point of the laws.[1]
This is where these stories reach beyond their original first-century context to speak to us all.

My grandmother grew up in a time when many practicing Christians didn’t do non-essential work on Sundays. Their farm family would milk the cows and feed the livestock, but they wouldn’t have worked in the field or the garden. When she was older, Grammy decided that she could do fancy needlework on Sunday, because it was relaxing for her. But she wouldn’t mend clothes on Sunday, because that was real work.
Some of us who are old enough probably remember a time when there were “Blue Laws” that set Sundays apart by limiting what was legal to do on Sundays. Stores were closed on Sundays, and a lot of gas stations, so you planned to buy your milk and bread and gas before Sunday came.  Movie theaters were closed on Sundays.  You weren’t supposed to play cards. In many states, you couldn’t buy liquor.

There weren’t a lot of other things competing for our time on Sundays. I remember going to church on Sunday morning, and then packing a picnic into the car, or visiting relatives. Sunday evenings, we had youth group at church.
For many people, the Blue Laws seemed restrictive and burdensome, and they eventually were discontinued.
A lot has changed since that time. Some families are so stressed with working long hours that they’ll tell you Sunday is the only time they have to do the laundry or shop for groceries.  Others are busy with a round of various activities.
I don’t think many of us would want to go back to a time when there were laws dictating what we can do on Sundays. But I think our scripture texts invite us to take a fresh look at keeping the Sabbath.
As Walter Brueggemann wrote, “It is unfortunate that in U.S. society, largely out of a misunderstood Puritan heritage, Sabbath has gotten enmeshed in legalism and moralism and blue laws and life-denying practices that contradict the freedom-bestowing intention of Sabbath.”[2]

Keeping the Sabbath was one of the Ten Commandments, and it was reinforced by the prophets and by Jewish teaching. It was one of the things that made Jews distinctive from their neighbors. It was a sign that they belonged to the true God, the Creator of the world, who had rested on the seventh day.
“Observe the Sabbath day and keep it holy, as the LORD your God commanded you. Six days you shall labor and do all your work. But the seventh day is a Sabbath to the LORD your God. You shall not do any work--you, or your son or your daughter, or your male or female slave, or your ox or your donkey, or any of your livestock, or the resident alien in your towns, so that your male and female slaves may rest as well as you. Remember that you were a slave in the land of Egypt, and the LORD your God brought you out from there with a mighty hand and an outstretched arm.  Therefore, the LORD your God commanded you to keep the Sabbath day.”[3]

When Israel arrived at Mount Sinai after Moses led them out of slavery in Pharaoh’s Egypt, they were in the process of what Walter Brueggemann calls “regime change.”   The people needed to accept the new rules of governance, to commit themselves to “love God” and to “love neighbor.”
The Ten Commandments begin with the Exodus from Egypt: “I am the LORD your God, who brought you out of the land of Egypt, out of the house of slavery.[4]
The people remembered that Egypt’s socioeconomic power was organized like a pyramid, with a work force producing wealth, all of which flowed upward to the power elite and eventually to Pharaoh.
When they heard the commandment to observe the Sabbath, they would have remembered that there had been no Sabbath in Egypt, no rest from work for slaves, no rest for anybody in the Egyptian system, because frantic productivity drove the entire system. In the commandment to keep the Sabbath, YHWH abolishes the entire system of anxious production.
As Brueggemann says, “there are limits to how much and how long slaves must produce bricks. There are limits to how much Pharaoh can store and consume and administer. The limit is set by the weekly work pause that breaks the production cycle. And those who participate in the Sabbath break the anxiety cycle. They are invited to awareness that life does not consist in frantic production and consumption that reduces everyone else to threat and competitor.”  As the Sabbath permits a waning of anxiety, so energy is redeployed to the neighborhood.”[5]
“The odd insistence of the God of Sinai is to counter anxious productivity with committed neighborliness.”  This creates a culture of security and respect and dignity. [6]
The commandment to observe the Sabbath, to carve out a time of rest for the community, can be transformative.  It’s no wonder, then, that Jesus invited his disciples out of the system of anxiety: “I tell you, don’t worry about your life, what you will eat or what you will drink, or about your body, what you will wear. Is not life more than food, and the body more than clothing?”[7]
The good news is that Jesus offers us an antidote to anxiety. The antidote is abundance, the outpouring of generosity of the creator God.
We need the Sabbath for our own personal well-being    and for the abundant life of our neighbors. If we keep the Sabbath, we don’t get to overlook neighbors whose lives are being threatened on a daily basis. If we keep the Sabbath, we don’t get to ignore how the lives of neighbors are being stripped of their dignity and worth.
God invites us to Sabbath rest because it is life-oriented and life-giving, and because it can create a Sabbath-shaped way of looking at all of life.

When we come to the Table, we hear again Jesus’ story of abundance. We who follow Jesus have decided that this story is true. The four great verbs: he took, he blessed, he broke, he gave.  This is the true story of our lives.
So, come to the Table to be fed by Christ.  Taste his bread and drink his wine.  Know that God is good! Amen!