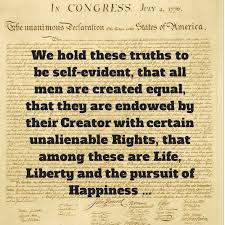 Here we are on the day after the Fourth of July, and the lectionary texts have us reflecting on what it is like to be God’s prophetic voice in the midst of our community and our culture.  Both of our scripture texts make it clear that it isn’t easy to speak God’s truth.  There will be mighty resistance.
According to Old Testament scholars, the prophet Ezekiel was active from about 593-571 BCE—a period of time that includes the destruction of the Temple in Jerusalem and the exile to Babylon in 587 BCE.  It was a time of great turmoil for the people of Israel.  Today’s reading tells us how God called Ezekiel to prophesy to the people of Israel, who have been rebellious.
“You shall speak my words to them,” the LORD says, “whether they hear or refuse to hear.”  God tells Ezekiel not to be dismayed or afraid.
Now, this is pretty standard stuff, in terms of what we know of the Old Testament prophets.  They are sent by God to the people, to call them back to the covenant.  They are often ignored… forgotten… berated… mistreated…tortured…and sometimes killed.  People don’t listen to them.
And yet they keep being called… and they keep speaking God’s  truth.
Fast forward 400-plus years to Jesus.  As Christians, it may be hard for us to understand that to most of the people of his time he was just another rabbi or prophet.  In today’s lesson,  Jesus is in his hometown, in the synagogue.  Mark tells us that “he began to teach,” and that no one is very happy with what he has to say.
These are people who know Jesus and his family.  In some way they seem to believe that what Jesus is saying is from God:  “What is this wisdom that has been given to him?  What deeds of power are being done by him!”
Mark’s account doesn’t give us a lot of details, but Luke’s version tells us that Jesus told the people in the synagogue:  “The Spirit of the Lord is upon me, because he has anointed me to bring good news to the poor.  He has sent me to proclaim release to the captives and recovery of sight to the blind, and to let the oppressed go free, to proclaim the year of the Lord’s favor.”
But the people of Nazareth took offense at Jesus’ teaching.   Then Jesus said, “Prophets are not without honor, except in their hometown, and among their own kind, and in their own house.”  And he could do no deed of power there, except for laying his hands on a few sick people and healing them.  Jesus was amazed at their unbelief.
I wonder if the hometown folk might have been willing to give this young man the benefit of the doubt, as long as he didn’t say anything too unexpected or challenging.  They might not have been inclined to doubt the source of his teachings if he hadn’t made them feel so uncomfortable.
Now, we might like to think that if we had been among Jesus’ hometown folks, we would have heard him gladly and changed our ways in any way he thought we should.  We’ll never know what we would have done then.  But the real question is:  What do we do now?
I don’t think human nature has changed much over the centuries. Skepticism can be helpful.  There are too many examples of people who were led astray by self-proclaimed experts and zealots, often with very bad outcomes.
But then how do we determine who is speaking the truth?  How do we discern the real prophets from the fakes?   It can be very hard to tell.  We let our prejudices get in the way.  We expect people to fit a certain mold…to look and sound a certain way.
All through the Bible we hear how God used the most unlikely people to do God’s work, and often the people involved weren’t too happy about it.  Very often God’s truth comes from sources we least expect.  And often the truth is inconvenient… or disturbing.
The truth disrupts our carefully designed paradigms…our carefully guarded prejudices…our convenient belief systems.  No wonder we ask, “Who do you think you are?”  The truth can threaten the very foundations upon which we have built our assumptions about other people…about systems of governance…about everything.  We all have prejudices and biases and assumptions that we rely on to get us through the day.
Look around at our world.  Here we are in the twenty-first century, and human beings are still fighting wars and practicing genocide across the world.  We still allow corporations to exploit people and the planet.

In  C.S. Lewis' Chronicles of Narnia, Aslan, the Lion King of Narnia, represents a Christ figure. Lucy, is talking with Mr. Beaver, and she’s curious about Aslan.   She has never seen him, but has heard that he is "on the move," and anticipates meeting him. "Is he safe?" she asks.
"Who said anything about being safe?" said Mr. Beaver. "Course he's not safe-- but he's good.  He's the King,  I tell you."[2]
Jesus is good-- but not safe.
Like the people of Nazareth, we have a choice in how we respond.  Like the people of Nazareth, we can resist and try to keep things comfortable and familiar and safe and free —free for us and for people like us.   We can complain about the things that are wrong in our nation and the world and how things are changing.  We can use our energy to maintain the status quo as long as possible.
We could do that.  Or we can listen for God’s word for us.  Even when it calls us to changes in our lives.  Even when it calls us to work for change, for a society in which there truly is liberty and justice for all.
America! America! God mend thine every flaw.
Confirm thy soul in self-control, thy liberty in law.[3]
On this Independence Day weekend, it’s a time for us to celebrate the many things that are good about our nation.
But we follow Jesus, who came to live among us, full of grace and truth, preaching a gospel of repentance.  As followers of Jesus,  it is also a time when we are challenged to re-dedicate ourselves to his mission,  to living more fully into the kingdom of God, the kingdom of justice and peace, which we also know as Beloved Community.
As Christians, we need to be in solidarity with our brothers and sisters in Christ who are suffering.... who have lost precious loved ones in an unfathomable act of hatred and violence… and others who have lost their church buildings and whatever sense of safety they may have had.   We need to reach out to them to show them we care.   We can help them re-build, and we can find ways to work with them to help mend the flaws in our nation.
My hope and prayer is that we will continue to be transformed by God’s gracious love,  and that we may be strengthened to hear Christ’s truth.

As we come to the Lord’s Table today, may we be open to experience Christ’s real presence in this holy mystery.  May we be fed and strengthened.  As we experience God’s gracious love, may we be transformed.  May our commitment to Jesus Christ be renewed.
Then let us go out into the world to serve Jesus by speaking and embodying God’s truth and love.
Amen!

[1] “A more perfect union” is a quote from the Preamble to the United States Constitution.
[2] C.S. Lewis,  The Lion, the Witch and the Wardrobe” (Geoffrey Bles Publ., 1950).
[3] The words of this national song, “O Beautiful for Spacious Skies,” are written as a prayer for our nation and recognize that we have flaws that need to be mended, with God’s help.
Posted by RevFranMusings at 11:13 AM

Email ThisBlogThis!Share to TwitterShare to FacebookShare to Pinterest
Labels: arson, Aslan, black churches, Declaration of Independence, Emanuel AME Church, Ezekiel, Jesus, liberty and justice for all, Narnia, prophets, racism, The Lion the Witch and the Wardrobe