"Enough." A sermon from Littlefield Presbyterian Church on John 6:1-21, on God's abundance. 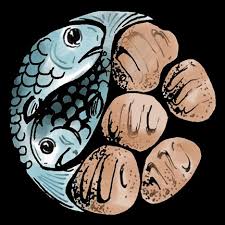 
In the process of spreading the word about our picnic today at Hemlock Park, I put an invitation on Facebook and said, “All are welcome.”  Jim McCreadie put a sign up on the church door telling anybody who showed up where we are, and he wrote, “All are welcome.”
So I started wondering, “What if a bunch of people saw that invitation and showed up for lunch?  Would we have enough to feed everybody? “  Then, when I got back to today’s scripture lessons, I thought:  “How relevant.”

The feeding of the multitude is the only miracle story that’s told in all four gospels.   So I think it’s clear that it was important in the life of the early church.  The lectionary wants to be sure we don’t miss an important theme today, so we also heard the story from Second Kings.
In Second Kings, we hear how a man came, bringing food from the first fruits to Elisha, the man of God:  twenty loaves of barley and fresh ears of grain.  Elisha says, “Give it to the people and let them eat.”  But his servant says, “How can I set this before a hundred people?”  In other words, we don’t have enough.
Elisha says again, “Give it to the people and let them eat, for this says the LORD, “They shall eat and have some left.”  He set the food out for them.  They ate.  And there was some left over, according to the word of the LORD.
One of my colleagues suggests that we can take this passage as an example of the way of life in the community gathered around the power of God.  It begins with the practice of stewardship by the man who brings a portion of his first fruits to Elisha.  It seems he offered the remainder of the first fruits to God in some other context.  In the first fruits, he offers to God’s people his best, but also the first harvest of his labor.  To do this, he would have to trust that God will provide more, so he can feed and support his family.[1]
Out of this act of stewardship comes the possibility for hospitality, as the gift is used to feed the multitude.   This is a recurring theme in the Bible.  Earlier in the Elisha stories, a woman from Shunem is in desperate poverty and debt when Elisha tells her to send her children out to borrow empty vessels from the neighbors, and suddenly they have an abundance of oil to sell and pay off their debts and have a livelihood.
Later, when there was a time of famine in Gilgal, Elisha told his servant to put a big pot on and make some stew.  They gathered up a wild vine and some wild gourds and added some flour.  People were afraid the foraged food was poisonous, but there was nothing harmful in the pot, and they could eat.
That’s where today’s lesson from the Hebrew Scriptures picks up, with its acts of faithful stewardship and hospitality flowing into the abundance of God.   People look at something and see scarcity.  If we’re afraid that there won’t be enough, we’re tempted to hoard what we have.
The servant looks at the small offering of first fruits and at the large crowd and says, “How can I set this before a hundred people?  There won’t be enough.”
The person of God looks at the same small offering ant the large crowd and sees not scarcity—but an opportunity to bear witness to the reality and power of God’s abundance.  So Elisha promises,  “They shall eat and have some left.”  According to the word of God, it is so.
God’s blessings are often more abundant than we realize.  When we are thankful for God’s love and goodness,  and trust in God’s abundance, we are free to share with our neighbor.
Fast forward…
“The Passover, the festival of the Jews was near,” and a large crowd was following Jesus.   I can imagine that in their minds they were seeing connections between Jesus and Moses.  When Jesus goes up the mountain, the crowd follows him.   Jesus sees the crowd, and he says to Philip, “Where are we to buy bread for these people to eat?”
He says this to test Philip.
Philip is sure they don’t have enough.   “Six months’ wages wouldn’t buy enough bread for each person to get even a little.”
But Andrew tells him, “There’s a boy here who has five barley loaves and two fish.  But what are they among many people?”   In other words, we don’t have enough.
Jesus told them to have the people sit down.  Then he “took the loaves and when he had given thanks, he distributed them to those who were seated.”   Everyone had as much bread and fish as they wanted.  When they were satisfied, he told his disciples, “Gather up the fragments left over, so that nothing is wasted.”  So they gathered up the left-overs, and they filled twelve baskets.
When the people saw the sign that he had done, they began to say, “This is indeed the prophet who is to come into the world.”

Now fast forward to today.  Imagine that Jesus is testing us.   Imagine there’s a mission project for which we’re sensing a call.  But we exercise responsible money-management procedures, and the numbers say we don’t take in enough revenue to support the mission.   We don’t have enough.
I wonder.    Do we expect to be part of a miracle?
How might our work as a congregation be different if we intentionally see what we do—each and every thing we do—as a way God can use us to reveal God’s power?

What if we understood a part of our mission to be responding to human hungers and as a way to point to Christ’s abundance?
What if – when we make ministry decisions—we remind ourselves of how Jesus can multiply resources so that there is enough?
We can choose to focus on scarcity and survival—or we can be agents of God’s grace and abundance, bringing hope to weary souls.
The love of God is made known to us through Jesus Christ, the one who knows our needs and our hungers and offers us the bread of life.  This was good news for the crowd gathered in John’s gospel near the mountain, and it is good news for us.
So let us offer all we have to Jesus and trust that he will take it, bless it, and use it.  Let us take God’s abundance out into the world, so that they too can know that through Christ Jesus they are enough… and there is enough.
Thanks be to God!
[1] Stephen Edmondson, in Feasting on the Word: Year B, Volume 3, Proper 12.
Posted by RevFranMusings at 8:53 PM