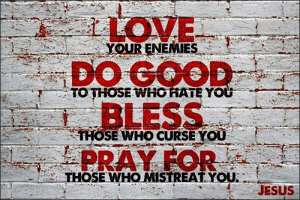 "To Love as God Loves"


Writing at the Presbyterian Mission blog, Rebecca Lister writes about how her son recently finished the requirements for the Boy Scout’s highest honor, Eagle Scout. As part of his final project, he designed and built a Little Free Pantry and a Little Free Library. He and several other Boy Scouts, family members and volunteers helped install them under some shade trees in front of the church.  The pantry has been very successful, as it is often empty. They were thrilled to see that the community was using it.
Rebecca was surprised to discover that not everyone in their community was as pleased about the Little Free Pantry as they were. She said she talked with several people, both inside and outside of their church, who question the concept of “free.”  “Isn’t that teaching people to be dependent on others for food?” asked one person. “Why shouldn’t they have to work for their food like everybody else?”
Another person said, “I know I’ve seen people go in and take out food who can afford it. I saw one woman talking on her cellphone as she did it. If she can afford a phone, she can afford food.”
Rebecca says that she’s always taken aback in conversations like these. She can certainly see their arguments. But deciding who is poor enough to be really poor—really needy—is dangerous business. Someone who looks well-dressed and carrying a cellphone may have just experienced a recent job loss. Perhaps they were impacted by the recent government shut-down or some other emergency. They may have some money, but knowing they can get a few cans of soup to heat up for their family for dinner may be what their weary spirits might need. It isn’t a permanent solution, ideally. And who knows? Maybe that same person who took something out of the pantry when they needed it in rough times will put something back in the pantry in good times.[1]

The way the lectionary works, we rarely get to the Seventh Sunday after Epiphany, so we don’t hear this passage from Luke very often.  In this part of Jesus’ Sermon on the Plain, Jesus admonishes his hearers to love their enemies and pray for those who persecute you. Be merciful. Don’t judge. Do good to those who hate you.  Offer the other cheek to the person who strikes you in the face. If someone takes something from you, don’t ask for them to return it.
This text is familiar—but hard!  Some people manage to embody these demanding, seemingly impossible instructions. In the Genesis text we heard Joseph extending grace and mercy and forgiveness to the brothers who betrayed him and sold him away into slavery.
We all know the Golden Rule embedded in this passage, but how often do we truly live by it?  It can take a lot of effort to control your anger when someone cuts you off in traffic… or fails to act in the way we think they should…or wrongs us in some way.
We may long for the unqualified forgiveness, reconciliation, and unearned compassion Joseph shows his brothers. And yet, we struggle with Jesus’ teachings.
These verses have been manipulated and have left those who are already vulnerable and victimized even further abused. Some preachers over the ages counseled people to stay with abusive spouses using these verses as proof of God’s will to do so. We need to be clear:  Jesus never condones abuse, and he condemns injustice. Jesus insists his followers live by his standard of love and justice, even when dealing with their enemies.
A lot of people talk about the “Golden Rule,” as if it’s a simple, easy way to live.  But it’s hard to break the cycle of retribution and violence. It’s hard to break a habit of counting the ways someone has wronged us. It’s counter-cultural to practice mutual respect and treat each person with dignity—even those we don’t think deserve it… or those who are our enemies… or those who have wronged us.
Keeping score of wrongs, getting even—that’s what enemies do. Some may secretly hope or plan for bad things to happen to their enemies. Maybe we just avoid and ignore them.  This is how much of the world behaves toward enemies. We go to war with them. We rejoice in their failures and mourn their successes. We try to get people to side with us against the person we believe has wronged us.

Time after time, the Tutsis and then the Hutus were caught in a cycle of retribution and violence in Rwanda. In the last terrible outbreak of violence, loyalty to tribe even outweighed allegiance to religious vows for some clergy.
In Jerusalem, sacred sites can separate rather than unite. In the land we call “Holy,” the body count grows, and the promise of peace seems impossible.
In such a world as this, what do we make of the ethics of God’s kingdom—or “kindom”?  We know the words: “Love your enemies. Do good to those who hate you. Bless those who curse you. Pray for those who abuse you. Forgive.”
These teachings are so often ignored. But we do catch glimpses of how Jesus’ teachings could provide a new way for us to live together: in the United States’ Marshall Plan’s assistance to former enemies following World War II… in the work of the Truth and Reconciliation Commission in South Africa after the end of Apartheid…in the World Bank’s partial forgiveness of the debts of poor nations at the urging of church coalitions supporting a time of Jubilee.[2]
Jesus asks, “What credit is it to you if you love someone who loves you, if you do good to someone who does good to you, if you lend to someone who will later lend something to you?” Jesus calls his disciples to stop keeping score, and to trust in the God who changed everything by settling the whole world’s old scores.
When we gather to worship together, we confess our sins and ask for forgiveness, so we can live into the new life God offers us. But in our individual lives, in our families and in our congregation, there are sometimes unresolved grievances and rifts of long duration. Siblings who haven’t spoken to one another in years. People who hold on to their grievances and can’t seem to get beyond them, even when they cause great pain.
Reconciliation is always hard to come by, but nothing is impossible for God. In Genesis, we hear that Joseph “keeps score no more.” He breaks from the past and invites his brothers to put the past behind them as well.
Jesus set the example of active non-violence when he was struck on the face and tormented during his trial. He sets the principle: “Treat others as you would like them to treat you.”
As followers of Christ, we are called into a new life in which we see things in a completely different way, a life in which we want to behave differently. We are called to look at each person through the eyes of love.

Jesus calls us to love as God loves: “Be compassionate as your Father is compassionate.”
The good news is that it is God’s very nature to be merciful and loving, even toward those who don’t deserve it. And that includes us.

Jesus doesn’t tell people to remain victims—but to find new ways of resisting evil. “Love your enemies. Do good to those who hate you.” This is the ethic that moved Martin Luther King, Jr. to kneel down with many brothers and sisters before water hoses and snarling police dogs.
Many people thought he was crazy. “Only violence can fight violence,” they said. But the authorities and oppressors didn’t know what to do with this kind of resistance.  When people around the nation turned on their televisions and saw these acts of non-violent resistance, hearts were changed.  Victims were refusing to be victims. Victims were refusing to fight back with violence. Victims were standing up for justice.  This love is not practical—but it can change the world.
Thanks be to God!

[1] Rebecca Lister, “The Needy and the Greedy: What makes us afraid to give freely to the needy?” https://www.presbyterianmission.org/today/2019/02/22/the-b-flat-christian-4/?fbclid=IwAR3JZUZoEj5ve9intx6v2xzEmSgHu6ActyVg76ESEzflKlSwBEh6AH3wku0

[2] Phyllis Kersten, in “Living by the Word” in The Christian Century. https://www.christiancentury.org/article//no-keeping-score

Posted by RevFranMusings at 1:55 PM