"An Amazing Catch." A Sermon from Littlefield Presbyterian Church on Luke 5:1-11. 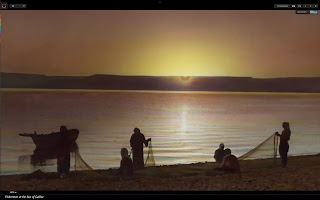 The call of the first disciples comes early in Luke’s gospel. After his baptism, Jesus was driven by the Spirit out into the wilderness to be tested for forty days. After that, he preached his inaugural sermon at his hometown synagogue in Nazareth, and was rejected and almost thrown off the cliff.
Then he traveled to Capernaum, where he was in the synagogue, and encountered conflict.  He healed the sick and cast out demons.
When today’s gospel lesson opens, Jesus is standing beside Lake Genneseret, which is another name for the Sea of Galilee.  The people are crowding around him and listening to the word of God. He saw two boats at the water’s edge, left there by the fishermen, who were washing their fishing nets.  Jesus got into one of the boats, the one that belonged to Simon, and asked him to put out a little from shore.
Now, Simon must have been exhausted after fishing all night with no success, and then working on his nets. I imagine he would have been looking forward to going home and getting some sleep.  Maybe Simon was remembering how Jesus came to his home in Capernaum and healed his mother-in-law. Maybe that explains Simon’s willingness to take Jesus out in the boat, so Jesus can use it as a floating pulpit.
Out in the lake, Jesus sat and taught the people from the boat.
Luke doesn’t tell us what Jesus taught the crowds that morning. The focus is on what happens afterward.
When he had finished speaking, Jesus said to Simon, “Put out into deep water, and let down the nets for a catch.”
Now, I imagine Simon believes this will be a futile exercise. They’d fished all night and caught nothing, so why should they expect anything different?  Why should these professional fishermen take fishing advice from a carpenter? We can almost hear the exasperation in his voice when he responds, “Master, we have worked all night but have caught nothing. But because you say so, I will let down the nets.”
So, they go out into deep water. There’s a subtle allusion here in the Greek word, bathos, that’s used in the Septuagint—the Greek translation of the Torah, Prophets and Writings—in connection with the primordial sea. This was a powerful Jewish symbol of chaos. Luke perceives the world as chaotic. There’s hostility between traditional Judaism and the followers of Jesus, the oppressive system of the Empire, and conflict within the early church.[1]

“Go out into the deep water.”  They go out into the deep water, and Simon lets down the nets, and they catch so many fish that the nets began to break. They signaled their partners in the other boat to come and help, and they filled both boats so full that they began to sink.
When he sees what is happening, Simon Peter is overwhelmed with fear and wonder, sensing that he is in the presence of divine power.  He’s caught by surprise.  In the midst of his ordinary daily life, after a particularly unsuccessful night at work, he is encountered by one who changes everything.  Simon sees the overwhelming disparity between God’s power manifest in Jesus and his own mortal, compromised life.
He responds by falling down at Jesus’ feet and begs him, “Go away from me, Lord. I am a sinful man!”

Then Jesus said to Simon, “Don’t be afraid.  From now on you will be catching people.”
The Greek word, zogron, translated here as “catching” is rare in the New Testament, but it means “to catch alive.”
In the Hebrew Scriptures and the Dead Sea Scrolls, fishing is used metaphorically for gathering people for judgment.[2]  The call to judgment was a theme in the preaching of John the Baptist.[3]
But, as New Testament scholar John Drury reminds us, the verb is also used in the Septuagint to denote “rescue,” from peril of death, not the capture of animals….” As Drury puts it, “The kingdom requires not dead fish, but human beings fully alive…people living the life of the good news in all its fullness.”[4]
But in the Gospels, the call to become fishers of people becomes a call to gather men and women for the kingdom.  The Word has come to dwell in the midst of everyday lives and everyday fishermen.
In today’s gospel story, Luke tells how Jesus calls Simon and his partners to a new vocation of catching people so that they might live, a life-giving vocation of being caught up in God’s mission of salvation for all.  The good news falls on the ears of Simon and James and John.
So, they pulled their boats up on shore. They had no idea what lay ahead on that open and uncharted journey from their familiar fishing boats. But they left everything, and they followed Jesus.

Do you wonder?  Why did Jesus choose Simon Peter and his fishing partners as his first disciples? They’re simple fishermen—middle class business owners of their time.  They were typical representatives of the broken old age, living under Roman oppression, burdened by high taxes, and beset by other forms of social conflict and economic stress. They didn’t have any particular religious credentials to commend them. They’re simply doing what they do every day.  They’re minding their own business, tending their nets, when Jesus comes along, enters into their normal, ordinary lives and changes everything.
Throughout the scriptures, we see that human sinfulness and failure and inadequacy are no obstacles to God’s call. God calls ordinary, imperfect people to do God’s work.[5]  God doesn’t wait for us to shape up. God calls us as we are and then works on shaping us into faithful servants.
How often do we resist Jesus’ claim on our lives because what he’s calling us to do seems to impractical or impossible? How often do we avoid putting out into the deep waters of following and bearing witness to Jesus because we’re convinced that we won’t see any results?  What might it mean for us to go deep-seeing fishing with Jesus—to trust and follow him outside our comfort zones…to let go of our certainties…to have our lives radically reoriented?

In our baptism we are called to be a part of God’s mission to the world in Jesus Christ. We are called to re-orient our priorities to align with God’s priorities, to use the gifts God has given us in the service to others, to share the good news of God’s love in our words and deeds.[6]

Jesus’ mission doesn’t wait until we think we’re ready. It doesn’t wait for us to feel comfortable or certain about how everything will turn out. We live in a broken and hurting world, and the need for the gospel is too urgent.

In the midst of our ordinary, busy lives, in spite of our failures, or our doubts or frailty, we are called to embody God’s love and justice and peace in our lives, in our communities, in our world. Jesus’ word to Simon Peter is also a word to us: “Don’t be afraid.”

We can trust that Jesus will be working with us and through us, “catching” others as he has caught us—in the deep, wide net of God’s mercy and love. We can trust that the mission is in God’s hands, and that God’s desire is for the nets to be bursting and the boats full.
Thanks be to God!


Posted by RevFranMusings at 12:25 PM