"Those Through Whom God's Light Shines." A Sermon from Littlefield Presbyterian Church on All Saints Sunday. 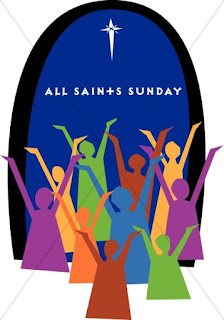 "Those Through Whom God's Light Shines"

In today’s gospel reading we heard some of the Bible’s most challenging descriptions of the Christian life.   It’s what’s known in the gospel of Luke as the “sermon on the plain.”  The parallel “Sermon on the Mount” in Matthew is better known-- but I think Luke’s version is even more demanding.
Both start with what’s known as the Beatitudes:  Blessed are you who are poor.  Blessed are you who are hungry…you who weep and mourn…you who are persecuted.  But Luke’s version continues with the “Woes:” Woe to you who are rich now.  Woe to you who are well fed now…you who laugh now…you who are applauded and commended.  You’ve already had your rewards.”
Both versions are followed with a series of instructions for how to live as a Christian.  “Love your enemies.  Do good to those who hate you.  Bless those who curse you.  Pray for those who abuse you.  If anyone strikes you on the cheek, offer the other cheek also.  If anyone takes away your coat, don’t withhold even your shirt.  Give to everyone who begs from you.  If anyone takes away your goods, do not ask for them again.”
Surely Jesus isn’t calling us to be naïve-- and easily exploited doormats for everybody else to wipe their feet on?  But surely Jesus doesn’t mean for us to ignore these words because they are too hard.  So…   how are we supposed to understand this?
According to Jesus, it is better to be poor in things and rich in spirit—than it is to be rich in things and poor in spirit.  There is joy and celebration for those who enjoy the reign of God, but those who trust in the riches of the present world have received all they will ever have.  What Jesus teaches is radically counter-cultural.
The culture says, “Show me the money,” while faith says, “Give me the kingdom.”  The world says, “I want it my way—now,” while faith says, “I’ll take it God’s way—in God’s time.”  The society says, “What you see is what you get,” while faith says, “What you see may well be an illusion.”

When I was studying Hebrew and Greek in seminary, we had to read passages were translating aloud in class.  In English, you can’t tell the difference between “you” singular and “you” in the plural, but you can in the original Greek.  So, we sounded a bit “Southern” when we did our translations-- when we would read “you all” to distinguish from you in the singular form.
When we read “Blessed are you who are poor… blessed are you who are hungry now,” it’s clear in the Greek that it’s plural.    “Blessed are you all who are poor.”  “Blessed are you all who are hungry.”
What difference does it make?  If I say to [one of you], ‘I need you to lift the piano off the floor,’ I don’t that s/he’s going to be able to do it.  It would be a real struggle.  But if I say to the choir or to the people sitting in the third pew, ‘You all need to lift the piano off the floor’—I think you all could do it.
This morning we’re celebrating All Saints’ Day.  It’s about remembering the Christians who have gone before us...  those who have shown us what it means to walk in the way of Jesus Christ.  It reminds us that we’re part of the “communion of the saints.”
So…  on this All Saints Sunday-- greetings to all you saints.

Does that make you squirm a little?   Most of us don’t think of ourselves as being very saintly.  We might be able to relate to what Nelson Mandela said when somebody called him a saint.  Mandela said, “I’m just a sinner who keeps on trying.”
I think that’s a good way to think of it.  We are all sinners, in need of God’s redemption.  In some Christian denominations, saints are people who have lived exceptionally holy lives.  But, in our baptism, we are called into a holy priesthood.  So, in the New Testament understanding, any Christian is a saint.
In the Catholic tradition, on each day of the year there are certain saints who are remembered.  Two of the best-known examples are St. Patrick’s Day and St. Valentine’s Day.
Over the centuries, there got to be more saints than there were days in the year.  The church also realized that there were many people who lived saintly lives, but who did so in such a quiet way that most people never knew about them.  So, All Saints’ Day was created as a day to remember all the saints.
In the Protestant tradition, we have come to understand the word “saint” as not just referring to a special select few Christians.  Rather, we have come to understand the word “saint” in a broader sense—in the biblical sense.  All Saints’ Day is a day to remember all the faithful people of God.
We remember that saints aren’t just those who did miraculous and amazing things.  The saints are also all those people across the years who showed their faith in Jesus by how they lived their lives.  Quite often, that faith was shown in very quiet and simple ways.

It’s been said that a saint is someone who lets God’s light shine through them.   As followers of Jesus Christ, we are called to be “the light of the world.”  God’s light shines into the darkness of this world, and we are called to let God’s light shine through us.
It isn’t our light that is shining:  it is the light of God, shining through our lives.
The apostle Paul began some of his letters by writing, “To all the saints at Rome…or Ephesus…or Corinth”—even if he was going to spend part of the letter telling them how they’ve been failing in the Christian life and need to do better.  Their failures don’t keep Paul from calling them “saints.”
As Will Willimon says, “A saint is any Christian, anyone whom God has called out to be blessed… baptized… different… distinctive.  Saints are those ordinary people who have had their little lives caught, commandeered by Christ in rather extraordinary ways.  And for that, Jesus calls them “blessed.”[1]
We are called together to be the church.  The church is in the business of producing and equipping saints for their ministries.
Think about it.  You are the only word from the Lord that some people will ever hear.  So, you—you all-- are blessed and sent out into the world to be God’s word in a troubled, hurting, confused world. You and I are called to embody God’s love and light to the people we meet who are sad… or lonely… or hungry…or just need a friend.
The GOOD NEWS is that you are not alone.  On this All Saints Sunday, we remember the saints who have gone on before us, trusting in the promises of Christ and the reign of God.  We are in a long line, part of a procession of people of faith who are rooted in the past and march on toward an eternal hope. While we who are a part of the Communion of Saints here on earth labor on for the kingdom of God, the rest of the Communion of saints, those who’ve gone on before, are cheering us on!

To God who is able to accomplish abundantly
far more than all we can ask or imagine--
to God be the glory in the church...
and in Christ Jesus...
to all generations, for ever and ever! Amen!  (Ephesians 3:20)


[1] William Willimon, “Saints, All of You” at www.chapel.duke.edu/worship/sunday/


Posted by RevFranMusings at 1:47 PM

Email ThisBlogThis!Share to TwitterShare to FacebookShare to Pinterest
Labels: All Saints, Beatitudes, Kingdom of God, saints