“The Kingdom of Truth.” A Sermon from Littlefield Presbyterian Church on Christ the King Sunday 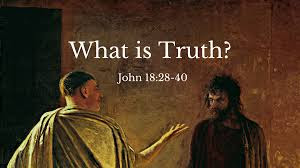 "The Kingdom of Truth"


In 1925, Pope Pius XI instituted a new liturgical observance:  the Feast of Christ the King. The Pope felt that the followers of Christ were being lured away by the increasing secularism of the world. They were choosing to live in the “kingdoms” of the world, rather than in the reign of God.
This last Sunday of the church year is Christ the King Sunday.  We prepare to begin a new church year next week. On the First Sunday of Advent, the coming of Jesus, not only in Bethlehem, but the second coming as well, we pause and reflect upon who Jesus the Christ is in our lives.
Truth be told, the language of “king” and “kingdom” troubles a lot of people these days. As Jill Duffield points out, “it creates a stumbling block to seeing God.  Male. Dominating. Subjugating. Hierarchical….”  Those of us who live in the United States of America remember that back in 1775 we declared our independence from a king and fought a war of independence.
So…what do we do with Christ the King Sunday?  These days, we also call it “Reign of Christ” Sunday. We talk about “the kin-dom of God. “But how do we talk about Christ as King of our lives?
The scripture texts appointed for this week give good clues for where to start.  The Revelation gives a beautiful glimpse into the glorious, majestic, all-encompassing power of the Risen Christ.  John the Evangelist proclaims that the One we worship, the Lord of all, poured himself out to the point of death on a cross.


Today’s gospel lesson is set in Pontius Pilate’s dusty headquarters in Jerusalem.  Pilate, an officer of the Roman Empire, looks over the ragged street preacher.   The Jewish religious authorities have turned Jesus over to be tried by the Roman authorities.   It is Pilate’s job to decide whether or not Jesus is a threat to the Empire.
“Are you the king of the Jews?”   Pilate asks.
Jesus answers, “Do you ask this on your own, or did others tell you about me?”
Pilate replies, “I am not a Jew-- am I?   Your own nation and the chief priests have handed you over to me.  What have you done?”
Jesus answers, “My kingdom is not from this world.  If my kingdom were from this world, my followers would be fighting to keep me from being handed over to the Jews.  But as it is, my kingdom is not from here.”
Pilate asks, “So you are a king?”
Jesus answers, “You say that I am.  But ‘king’ is your word.  My task is to bear witness to the truth.  Everyone who belongs to the truth listens to my voice.”
Pilate then answers, “What is truth?”
Of course, “What is truth?” has everything to do with Jesus as king, for Jesus is the truth.
Dr. Emilie Townes makes a helpful distinction between the more intellectual understanding of truth (which Pilate represents in this passage) and truth as revelation, which we find in Jesus Christ.[1]
Dr. Townes writes, “We must seek to know God and live as active witnesses on this journey into God.  Jesus’ life and mission is a model of this for us. In Jesus, we learn that truth is a stimulant for faithful living and witness, rather than only a matter for contemplation. It is something we do.”
What Pilate misses-- what most of the world misses-- is that Jesus’ Kingdom was never a place, but a perspective…never an established rule, but a stated reality of how to live life.  It was never about hierarchy or domination, but a way of interpreting the world and embodying Jesus’ gospel truth in everything we do.
This is a counter-cultural way to live. We’re socialized to trust in the kinds of kingdoms that aren’t interested in the Truth at all, but who tell half-truths, false truths, fake truths that tap into our insecurities and our fears. It might be easier to live under authority, rather than turning away from that and living into the way of truth and justice for all.
The gospels tell us what happens when oppressive, unjust kingdoms are confronted for their wrongs and defied for their abuses-- you can end up like Jesus. Or Dietrich Bonhoeffer… or Dr Martin Luther King…or Archbishop Romero.  We know when we stand up to privilege, those with power and privilege will want to shut us up.
When you stand up to the workings of the world’s kingdoms that rely on sexism, racism, homophobia, xenophobia, classism, or able-ism to survive, expect to be silenced. When you stand up to the injustices of the kingdoms at hand that survive because of thrive on fear, expect to be discredited and disregarded.[2]
The kingdoms of this world use power and privilege to keep people in their place.  But Jesus’ Kingdom tells the truth about the Truth-- that God so loves the world.
Jesus Christ, our Savior, the one who was betrayed, arrested, beaten, mocked, and taken before Pilate, tells the ruler with the power to kill him, “My kingdom is not of this world.” When he could have spared himself, Jesus chose truth over safety, saying, “I came to testify to the truth. Whoever belongs to the truth listens to my voice.”
In a time when there are so many lies, those of us who worship Christ the King are called to testify to the truth.

As followers of Jesus, we are called to listen to his voice and to live in his way of truth and love. We are called to love God and our neighbors, to work for peace and reconciliation and justice for all, to embody the love of Jesus Christ in all our relationships. As we grow in faith toge

In our Presbyterian and Reformed tradition, our understanding of baptism emphasizes God’s initiative.  God reaches out graciously to us, and offers us the gift of life in the kingdom as a free gift.  We respond by dedicating our lives to Jesus Christ as our Lord and Savior and committing ourselves to follow him.  Baptism is the beginning of our life in the church…a first step in a journey that takes a lifetime.
ther, we trust in the Holy Spirit to guide us, to lead us further into the truth, and to empower us to live into God’s Kingdom.   Through the guidance and power of the Holy Spirit, we teach and encourage each other to live in the way of God’s love.

One of the great joys of the Christian life is when parents present their children for baptism.  This is their public declaration that they want their child to be a part of the church and to have a ministry in it.
Baptism is central to our identity as Christians.    As we live into our baptism, we learn who we are and whose we are.  We are nurtured to see ourselves as beloved children of God, and that can make all the difference!
The baptismal font stands at the front of sanctuary to remind us that we’ve been initiated into this congregation, as well as into the universal church of Jesus Christ.
When parents and a congregation baptize children, we all promise to teach them who they are in the light of God’s truth.  We promise to teach them what makes them different as part of a holy people…a royal priesthood…consecrated to God’s service.
When parents present their child for baptism, they promise to live the Christian faith themselves, and to teach that faith to their children, by word and example.  To grow in the faith, we all need to worship and learn together—in our families, and in the faith community which is the church.
Today, we’re inviting Khalil to be part of the great adventure we call church.
What God will make of Khalil’s life, or where God will lead him, or what kind of ministry he will have, we don’t know.
But what we do know…what we can say with certainty, because we have God’s PROMISE—is that God is with us every step of the way.
May God bless Khalil and his family…and all of us on our adventure, as we live into God’s Kingdom together!
Amen!

[1] Emilie M. Townes, “Theological Perspective,” in Feasting on the Word: Year B, Volume 4: Season after Pentecost 2 (Propers 17)  Reign of Christ
[2] I’m grateful to Caroline Lewis for her insights in “The True Kingdom” at Working Preacher. http://www.workingpreacher.org/craft.aspx?post=5252

Posted by RevFranMusings at 3:26 PM