"Where's Your Heart?" A Sermon from Littlefield Presbyterian Church. 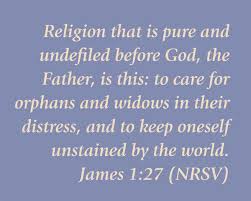 
What’s at stake here?”
Some biblical scholars argue that the conflict in this story mirrors a similar conflict in Mark’s community. Mark was a non-Palestinian Gentile, and he was writing to a mixed community of Jewish and Gentile Christians who were arguing over whether it was necessary to keep a kosher table at church gatherings.
“’Don’t you understand?’” Mark asks. “’Don’t you see that whatever goes into a person from outside cannot defile, since it enters, not the heart but the stomach, and goes out into the sewer?’”  Thus, Mark says, Jesus declared all foods clean.”
Other commentators have a different take on what the conflict is about. They say it’s about teaching humanly constructed religious ideas as God’s law. “You abandon the commandment of God and hold to human tradition.”  These scholars say the main point is about obeying God’s commandments, rather than human traditions and rules.
But I agree with Tom Long when he says this is about using moral posturing to sidestep the commandments, that it’s about keeping our hands ritually washed while being up to our elbows in evil.[1]
To paraphrase Walker Percy, it’s like getting an A-plus in ethics class and flunking life.

What might this look like in our time?   Some government officials quote a verse from Romans 13 out of context to justify separating children from their parents at our borders, saying we are to obey the laws of the government, which has been ordained by God--which is one of the verses that has been used in the past to defend slavery and other evils.  Some people twist Jesus’ statement that we will always have the poor with us to justify not working to alleviate extreme poverty. They might say we can’t afford safety net programs that address hunger or homelessness, even though the richest people have received generous tax cuts,
Can we understand why Jesus got angry with the Pharisees and the scribes, exclaiming, “Isaiah prophesied rightly about you hypocrites, as it is written, and calling on the words of the prophet: ‘This people honors me with their lips, but their hearts are far from me. In vain do they worship me, teaching human precepts as doctrines.’”[2]

Jesus was calling out the Pharisees and scribes for passing off human ideas as God’s commandments.
Now, the Pharisees were people who took their religion very seriously.  I believe they sincerely wanted to serve God faithfully. They were criticizing Jesus’ disciples for not living according to the tradition of the elders.
Let’s back up a minute and remember the context of this encounter.  Just before this, Mark has told how Jesus fed 5,000 people… and walked on the water… and healed the sick.
The Kingdom of God is breaking out around them, and the Pharisees don’t seem to notice.  The sick are being healed.  The hungry are being fed.  Good news is being preached to the poor.  These are the things that Isaiah had prophesied that would be signs of the coming of the Messiah, but the Pharisees and scribes want to talk about hand washing and tradition.
A moment of GRACE is breaking into the midst of time and space.   Not only can’t the Pharisees and scribes see it-- but they keep asking the wrong questions.  They’re asking, “How can we protect our tradition?  How can we get folk to do things our way?
Too often in the church, we ask the wrong questions.  How do we keep everybody happy?  How do we avoid conflict?  How will we survive?  “How do we make everybody follow our rules? How do I get everybody to do what I want?
In the meantime, there are people inside and outside the church--people with broken hearts… broken dreams… and broken lives.  People who are lonely.  People who need to be restored to community.  People who need to be fed…and healed…and loved.

Now, the process of spiritual growth is hard.  Sometimes it can be downright scary.  So, it’s no wonder that sometimes we, like the Pharisees, feel safer clinging to rules or traditions or familiar ways of doing things, rather than look for ways God is trying to use us to bring the kingdom of love and justice into the world.
Jesus accused the religious authorities of being “hypocrites.”     The Greek word Mark uses for hypocrite has a revealing history.  It literally means an actor—a person who acts out a set dialog or script.
In accusing the Pharisees of being hypocrites, Jesus was inviting them to put down the mask of outward appearances.  In giving them a list of things that can defile people, things which come from within, Jesus was challenging them to examine their own hearts honestly, and to pay attention to what’s really important.   We have been set apart as a holy people for a holy purpose:  to love the Lord our God with all our heart, soul, and mind, and to love our neighbor as ourselves.
It’s much easier to point a finger at the sins of others than to look inward at the things that can defile.    Yet today’s gospel lesson makes it clear that we need to pay attention to where our hearts are.
But what does that look like?
In the epistle lesson we heard today, James fleshes out Jesus’ summary of the Law and giving some specific ways we need to live into “the perfect law of liberty.”
If we are to love our neighbors, then we need to be engaged with them, relating to them, and caring for them. That long list of vices Jesus quotes defile us because they all divide us-- from God and from each other, our neighbors.
What does it mean for us to be holy, and "undefiled"? James offers an interesting definition in his letter:  "Religion that is pure and undefiled before God, the Father, is this: to care for widows and orphans in their distress, and to keep oneself unstained by the world."[3] James teaches that religious practice is judged on what we do.  Widows and orphans were the most vulnerable members of ancient societies; they had no means of support, no means of getting any, and no one to look out for them.  Caring for them means to attend to the needs of the poorest of the poor, those whom nobody else cares about or feels responsible for.  That is true religion, true holy conduct.  That is what we have been set apart to do.
We know God partly through our traditions.  But we worship the one true God, the God of ever-ongoing creation… and new possibilities.   God overcomes sin and death with new life.
Jesus came proclaiming that the Kingdom of God is near, calling people to repent, to change.
In Jesus Christ, we have the perfect example of a person who is holy and whole.  The gospels tell us that Jesus went about preaching good news to the poor and release to the captives.  He taught by word and deed.  He blessed the children.  He healed the sick and ministered to the brokenhearted.  He ate with outcasts…forgave sinners…and called all to repent and believe the good news of God’s love and forgiveness.

The world tries to set limits on what we believe is possible and sets boundaries that set us apart from “them.”   But Christ came breaking down the dividing walls and showing us that there is no such thing as a hopeless case.  There is nobody outside the circle of God’s love.   In Christ, there are no “others”—only neighbors.   Because God loves our neighbors, we are commanded to love them too.
I like the way one of my colleagues puts it, in a sermon entitled, “Dirtiness is next to Godliness:”
Our hands are made clean and holy, not by washing them, but by getting them dirty.  Our hands have been set apart to reach out into the dirtiness of the world’s injustices and impurities on Christ’s behalf, to touch with compassion those considered untouchable or unclean by our social mores, cultural divisions, or political commitments. [4]
As Teresa of Avila famously put it, "Christ has no body now on earth but yours… no hands but yours…  no feet but yours.  Yours are the eyes through which God’s compassion will look upon the world.  Yours are the feet with which God will go about doing good.  Yours are the hands with which God will bless others now."
God has fully revealed God’s love for us in Jesus.  In response to that love, God wants us our love in return.  We are called to worship God through our total devotion…and through our ministry to all God’s children in need, as we love as Christ loves.  God’s way is a tradition of self-giving love.
So, in the midst of the daily struggles and questions we face every day, may our hearts be in the right place.  May our hearts become more and more open to God’s love and life.
Amen.

[4] I’m indebted here to the Rev. J. C. Austin, in “Dirtiness is next to Godliness,” (Madison Avenue Pulpit, 2003), a sermon posted in the past at website that no longer exists.

Posted by RevFranMusings at 1:59 PM