"Faith and Fear." A Sermon from Littlefield Presbyterian Church. Mark 9:30-37. 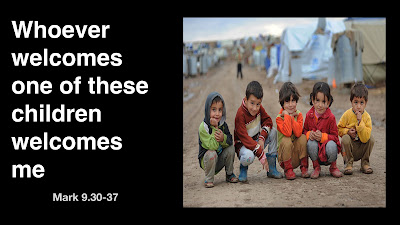 In last week’s gospel lesson, Jesus traveled to the region of Tyre and then to the Decapolis.[1]  In today’s text, he’s back in his home territory of Galilee, but “he did not want anyone to know it.”  The reason he didn’t want anyone to know he was there? He had some important teaching to do with his disciples.
Some very important things have happened in the meantime.  In Caesarea Philippi, Jesus had asked his disciples, “Who are people saying that I am? Who do you say I am?” Then he began teaching the disciples about what awaits him in Jerusalem and about the cost of following him. Peter, James, and John had seen Jesus transfigured on a mountain.[2]  Later, Jesus cast a demon out of a boy.
Now, as they’re passing through Galilee, Jesus is trying again to avoid being noticed while he continues to teach his disciples, saying, “The Son of Man is to be betrayed into human hands, and they will kill him, and three days after being killed, he will rise again.”  But the disciples didn’t understand what he was saying and were afraid to ask him. Maybe they don’t want to understand. This is a hard teaching about a Messiah who suffers and dies.
I wonder what the disciples might have asked if they had not been afraid.  Are we really very different?

I agree with David Lose that it’s important to ask good questions. But our fears can get in the way. What fears pursue you during the day and haunt you at night? What worries weigh you down so that it’s difficult to move forward in faith?”[3] Our fears have a way of sneaking into our very being, and robbing us of the abundant life Jesus came both to announce and to share.

Did you notice? The disciples don’t ask Jesus any questions in response to his prediction of his crucifixion because they’re afraid. And the next thing you know they’re talking about who was the greatest, who was going to have a place of privilege and power in the coming kingdom.
Fear can do that. It can paralyze you. It can motivate you to look out only for yourself.
This isn’t the only time Mark contrasts and faith and fear. In the fourth chapter of Mark, after Jesus stills the storm that had terrified the disciples, Jesus asks them, “Why are you afraid? Have you no faith?” As he was restoring Jairus’ daughter, he tells the distraught father, “Don’t be afraid. Only believe.”[4]
The opposite of faith is not doubt--but fear.  The kind of fear that can paralyze you… distort how you perceive reality… and drive you to despair.

The disciples didn’t understand what Jesus was saying and were afraid to ask him.
In the house in Capernaum, Jesus asked them, “What were you arguing about on the way? But they were silent, for on the way they had argued with one another who was the greatest.
He called the twelve and said to them, “whoever wants to be first must be last of all and servant of all.  Then he took a little child and put it among them, and taking it in his arms, and he said to them, “Whoever welcomes one such child in my name welcomes me, and whoever welcomes me welcomes not me but the one who sent me.”
Now, in ancient times, a child was regarded as a non-person, or a not-yet-person, the possession of the father in the household.   When Jesus held up a child as an emblem of living in God’s household, and perhaps even as a stand-in for Jesus himself, he was challenging the social norms of the day.
This child was as important to Jesus as the vision on the mountain. Jesus wanted his disciples to see the child…and welcome the child.  Not because the child is innocent or pure or perfect or cute.  No. Jesus wanted them to welcome the child because the child was at the bottom of the social heap.  In Mark’s gospel, children aren’t symbols of innocence or holiness. More often, they are the victims of poverty and disease. Jesus brings the child from the margins into the very center.

But, surely, we want to think, we are different.  We value children in our churches and in society. And yet…

In the United States of America--one of the richest countries in the world-- children remain the poorest age group. According to the Children’s Defense Fund, nearly one in five children--12.8 million in total-- were poor in 2017. Over 45 percent of these children lived in extreme poverty at less than half the poverty level.  Nearly 70 percent of poor children were children of color.  The youngest children are most likely to be poor, with 1 in 5 children under 5 living in poverty during the years of rapid brain development.
Child poverty hurts children. Child poverty hurts our nation’s future. It creates gaps in cognitive skills for very young children, puts children at greater risk of hunger and homelessness, jeopardizes their health and ability to learn, and fuels the inter-generational cycle of poverty.
Ponder this: 3 million children in the U.S. live in families surviving on $2 a day per person.[5]  I hope you’ll take that statistic home with you and consider what $2 a day per person would buy and what it wouldn’t.
Something else to ponder:  More than 400 children who were separated from their families at the southern border are still separated from their families.
These are moral issues that reflect how we are living our values in our society. When we look at the federal and state budgets and see actions to limit access to medical services for lower income Americans including children, or cut-backs in nutrition programs for children, we need to see how these actions affect children’s lives.
Do we see the children? Do we welcome them?
Joyce Ann Mercer suggests that Jesus’ treatment of children shows his “struggle and resistance to the purposes of empire.” The politics of empire favors relationships of power and privilege, while the politics embodied of the kingdom of God lifts up the lowly, and those with no power or privilege. [6]
Jesus came to live among us, full of grace and truth.[7]  He proclaimed the reign of God, preaching good news to the poor and release to the poor and release to the captives…teaching by word and deed and blessing the children.[8]
Do we see them? Do we welcome them?  If we don’t, what are the fears that hold us back from fully welcoming them?
Jesus called his followers to live out gospel values. He calls us to extending hospitality to those who were considered little more than property.  He healed when he wasn’t supposed to, touched people he shouldn’t have touched.  He taught that all our ideas about greatness mean nothing if we don’t stoop down low enough to see the little ones in our midst.
That day in Capernaum, Jesus held a little child in his arms and brought the words of heaven down to earth. I imagine Jesus whispering in the child’s ear, “You are God’s beloved child.”[9]
The good news is that God has named us all as beloved children and calls us to welcome children in Christ’s name. This isn’t as simple or limited as it might seem. It means caring for children-- not only our own children and grandchildren, but children of migrant workers and asylum-seekers, children of poverty in our cities and impoverished rural areas.
The good news is that Jesus has promised to be with us always and has given us the Holy Spirit to lead and empower us.  In this broken and fearful world, the Spirit gives us courage to pray without ceasing, to witness among all peoples to Christ as Lord and Savior, to unmask idolatries in Church and culture, to hear the voices of peoples long silenced, and to work with others for justice, freedom, and peace.[10]
Thanks be to God, through Jesus Christ our Lord!  Amen!


Posted by RevFranMusings at 2:13 PM