"Love One Another." A Sermon from Littlefield Presbyterian Church on the Sixth Sunday of Easter. 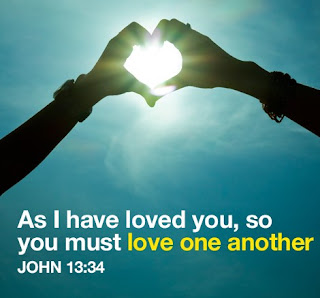 In the verses we heard this morning from the book of Acts, we hear Jewish Christians in the early church wondering, “Could the gift of the Holy Spirit be poured out even on the Gentiles?” “Could it be God’s will for them to be baptized into our community?”   “Could even they be our friends in Christ?”
In the gospel lesson, we hear Jesus talking with his disciples on the eve of his execution: “As God the Father has loved me, so I have loved you.  Abide in my love….  If you keep my commandments, you will abide in my love, just as I have kept my Father’s commandments and abide in God’s love.”

What does this mean? -- to abide in God’s love? What does it mean to keep God’s commandments? What does it look like?
It sounds simple enough. But, obviously, it isn’t, or we would be living in a much more loving, compassionate world.

Over the past couple of days, some of us have been following the story of two Native American teen brothers who saved their money to visit Colorado State University to see if it would be a good fit for the older brother to transfer from community college. A mother on the campus tour called police to tell them the two young men made her “nervous.” Campus police responded and pulled the boys aside and patted them down and let the boys go when they showed them their invitation letter for the tour.

An African-American teen missed the school bus in Rochester Hills and got lost walking the four miles to school.  He saw a Neighborhood Watch sign and thought that would be a safe place to ask directions.  The woman who answered the door assumed the 14-year-old was attempting to break into their home   and started yelling at him. Her husband came downstairs and grabbed the gun     and shot at the kid as he ran away.

A group of five African-American women were accused of playing too slowly by a Pennsylvania golf club’s employees and co-owner and were kicked out after the police were called.

A Starbucks manager called the police to remove two young African-American men who were waiting for their business associate to arrive for a meeting.
The list could go on…
Now, I don’t know about you, but I’ve used the restroom or WIFI in a fast food restaurant or coffee shop before I bought anything, and I’ve never worried about getting in trouble for it, much less getting arrested.  I’m aware that I’m generally protected by privilege-- privilege I never asked for, but which I have.
I can’t fathom looking at those two teenage boys on a college tour and thinking they’re too quiet   or I don’t like how they’re dressed, so I’ll call the police and tell them I’m feeling nervous.
Now, these things haven’t happened as isolated incidents. There is a context and a history that helps us to understand how we got here.  There were people who hated and oppressed people who were different, people who were “other” in Jesus’ time and throughout history.
We have dehumanized people-- treated them as less than human-- to justify genocides and enslavement and to maintain a system of white supremacy.
We live in a broken and fearful world.
But the good news is that Jesus came to live among us, full of grace and truth,[1]  teaching in word and deed God’s way of self-giving, sacrificial love, and inviting us to live into the kingdom of God-- the beloved community.
I appreciate how David Lose challenges us to imagine God differently, because too often people have their image of God shaped by things that have gone wrong-- a neglectful or abusive parent, an early loss, a terrible disease that took a loved one. Or, as David Lose suggests, perhaps our image of God is shaped by popular theology:
There’s a lot of bad theology about the cross: that it was the instrument by which God’s sense of justice had to be satisfied…that Jesus was punished on the cross in our place, taking the punishment we deserved…that the blood of Jesus was payment for our sin.  I struggle with these images, because I think they paint a picture of an angry and punishing God, rather than a God who loves us unconditionally and desires to love and forgive us.
So, I invite you to ponder what Jesus showed us about how much God loves us.  When we see Jesus on the cross, we see God’s willingness to enter into the confusion and violence and heartache of humanity. In the resurrection that follows is the promise and sign that when we’ve fallen tragically short of God’s hopes for us, God’s love enfleshed in Jesus endures and is victorious.
As David Lose puts it: “There is no length to which God would not go to embrace us in love. There is nothing that God wouldn’t do to save us through love. And there is nothing God will permit to remain between us and God’s love. Love will conquer. Love will prevail. Love will win.”[2]

“As God the Father has loved me, so I have loved you.  Abide in my love,” says Jesus. If you keep my commandments, you will abide in my love, just as I have kept my Father’s commandments and abide in God’s love.”
Jesus is saying this to his disciples on the eve of his crucifixion. He is about to embody the love he describes when he says this, “No one has greater love than this, that you lay down your life for your friends.” And that’s what Jesus does.
“Abide in my love,” Jesus says. “This is my commandment, that you love one another, as I have loved you….I am giving you these commands that you may love one another.”
If we are serious about being friends of Jesus, we need to do what he commands us. We have been chosen to go and bear fruit-- the fruit of love.
What might that look like?

I was especially inspired this week by several stories I heard, both about men who overcame great difficulties to graduate from college this week.  One of them was about Freddie Sherrill, who had sunk to the bottom of life in the street in Charlotte, North Carolina. He guzzled cheap wine, snorted cocaine, and shot up heroin. He slept in vacant houses and in cardboard boxes under railroad bridges. He did four stretches in truancy school, five in prison, and five more in treatment centers. He even failed at suicide. And yet, this week, at age 65, this man who had barely been able to read graduated from Queens University.
Along the way, Sherrill had plenty of help on his unlikely path to a college degree, including a forgiving wife, a minister who took a chance on a stranger, and members of Myers Park Presbyterian Church.
After his failed suicide attempt in 1988, Sherrill landed at a rehab center in Morgantown, West Virginia, where he was befriended by a local couple who introduced him to their minister, Steve Eason, who at that time was the pastor of a local Presbyterian Church. The church needed a sexton, and Steve said he’d try him on the job, but if he ever smelled alcohol on him, he’d fire him.
With the help of the local Literacy Council, Sherrill began to learn to read. He started classes at the local community college to earn his high school equivalency degree, passing by a single point on his sixth try. Then he went on to earn an associate’s degree in human services with a concentration in substance abuse counseling. It took him 13 years. Over the years, he became an AA leader and spoke for local meetings and was eventually invited to talk with teens imprisoned in a nearby correctional center. By 1995, he was a substance abuse counselor at the at several centers.
Sherrill kept in touch with Rev. Eason after he left Morgantown over the years, and in 2002, after Myers Park Presbyterian Church in Charlotte, North Carolina called him as their pastor, Sherrill was offered a job as their sexton. In Charlotte, Sherrill worked with poor children and volunteered with a group that works to prevent youth from dropping out of school.
Sherrill asked Myers Park Church members for help when his son was applying to colleges, and a retired bank executive nudged Sherrill to take classes himself. He enrolled at Queens University, which is a Presbyterian-related school. Professors and learning centers helped him improve his writing and study skills as he progressed. He worked very hard, and several church members served as proofreaders of his class papers. It took him seven years of taking evening classes, but he graduated with a bachelor’s degree in human service studies.[3]

And then, closer to home, there’s Byron Brooks’ story.  His story is so inspiring that he has been featured on at least two local news stations and in at least one Detroit paper.
This 23-year-old man graduated this weekend from Henry Ford College. His mother gave birth to him in prison, and he didn’t know his biological father. His great-grandparents took him in and taught him the importance of faith, education, and music. He started taking classes at Henry Ford College, but soon became homeless. At his lowest point, he would sleep on bleachers, park benches, and under trees. He didn’t want to ask for help, but someone at his church found out he was homeless and took him in.
Some school staff members and friends started helping Byron out. One student would bring him lunch every day. In the midst of all his challenges, Byron made the Dean’s List and became a licensed minister.
Byron has been accepted to Harvard, Howard, University of Michigan and other prestigious schools, but he decided to attend Ferris State University this fall so he can stay close to his church and come back to Henry Ford College and mentor other students. He wants to create a music program for at-risk youth. [4]

When we abide in love, when we are friends with Jesus, we will love one another in active ways, and we can change people’s lives. We can do beautiful things for God that can change the world.
When we abide in love, we practice looking at each person we meet through the eyes of love, seeing them as beloved children of God. When we do that, empowered by the Spirit, we can be given the courage to do what we can to ensure the dignity of all persons.
When people speak up when they see injustice, when they record video when someone is being treated unjustly, it makes a difference. When we use social media to challenge bias and injustice, it’s one of the ways we can show our love for all persons.
When we stand with poor and marginalized persons in solidarity, we are following in Jesus’ way of love, which is why I will be part of the Poor People’s Campaign, along with many other persons of faith.
Jesus calls us into his way of love: “This is my commandment, that you love one another as I have loved you. No one has greater love than this, to lay down one’s life for one’s friends….I appointed you to go and brear fruit, fruit that will last….”

The good news is that Jesus says these things to us so that his joy may be in us and that our joy may be complete!
Thanks be to God!
Amen.

Posted by RevFranMusings at 12:31 PM