"Becoming the Pentecost Church." A Sermon from Littlefield Presbyterian Church on Pentecost Sunday. 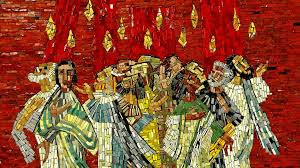 
On Pentecost, the disciples were gathered together in Jerusalem. It was 50 days after Jesus was raised from the grave., waiting and hoping for the fulfillment of Jesus’ promise-- the promise we heard last week: “You will receive power when the Holy Spirit has come upon you.  And you will be my witnesses in Jerusalem, in all Judea and Samaria, and to the ends of the earth.
What was it that happened on that Day of Pentecost?  Pentecost is the story of how the church came alive by the power of the Holy Spirit.  On that day, followers of Jesus Christ received the power to take the gospel to the streets there in Jerusalem...  and eventually throughout the earth.
What happened that day was such a powerful experience that the people who were there had to turn to dramatic metaphor to describe what happened.  They said it was like a fire falling on them.
On that day, a mighty wind from heaven blew the fire of the Holy Spirit into those followers who were gathered together.  When something like tongues of fire danced over the heads of the apostles, they seemed to be quickened by unseen forces.  They were shouting...  preaching...  speaking in a variety of languages so people from a lot of different countries could understand each other...  and generally making such a commotion that the people of the city had to stop and wonder:  what on earth was going on?
The Spirit blew into the apostles an awareness that-- just as Jesus had promised-- the presence of the Holy Spirit was with them… and was at work in and through them.

One way of understanding what happened at Pentecost is as a reversal of the story of the tower of Babel, as told in the book of Genesis. In the biblical memory, all the people in the world--the world known to them-- spoke a common language.
According to the story, this unity of language and of culture was a dangerous thing. Because they could understand each other, the people gathered in one place and decided to build a city and a tower with its top in the heavens. They wanted to “make a name for themselves. They wanted power.

Biblical scholar Robert Williamson suggests that when the people first began to make the bricks and mortar, there wasn’t really a plan to build a tower. Only after they’ve been laboring to make bricks is the decision made to build the tower.[1]
What did they think they were making bricks for? Maybe some thought they’d be used to build houses so that everyone would have shelter. But then the plan emerged to build a tower upward toward the heavens.
Williamson suggests--rightly, I think-- that towers are part of a hierarchical way of being in the world.  Not everyone can live at the top of the tower, in the penthouse. Not everyone can reach for the heavens. Most have to remain below. Some have to keep making bricks. Some have to grow the food to feed the privileged few at the top. Those at the bottom of the tower become the subjects of those at the top.[2]
The story of the Tower of Babel illustrates the human tendency to build upward, for some to elevate themselves at the expense of others. It lays bare the desire of some to be like gods.

God responds to the building of the tower--to the creation of the hierarchy--with anger.  God recognizes the capacity of human beings to construct centers of domination. “This is only the beginning of what they will do,” God says. “Nothing that they propose to do will now be impossible for them.”
So, God scatters the people across the face of the earth and mixes their languages so they won’t be able to understand one another. This is the way the ancient text in Genesis explains the origin of different languages and cultural differences.

I hear an echo of this scattering in the birth story in Luke’s gospel.
We hear the angel Gabriel say to Mary, “The Holy Spirit will come upon you, and the power of the Most High will overshadow you. Therefore, the child to be born will be holy, and he will be called Son of God.”
In the song of praise and joy Mary sings, she proclaims that the Mighty One has done great things…. He has shown strength with his arm. He has scattered the proud in the thoughts of their hearts. He has brought down the powerful from their thrones, and lifted up the lowly…he has filled the hungry with good things, and sent the rich away empty….”[3]

On the day of Pentecost, the Spirit blew into the apostles an awareness that-- just as Jesus had promised-- the presence of the Holy Spirit was with them… and was at work in and through them.
The disciples were filled with the Holy Spirit and began to speak in other languages, as the Spirit gave them ability.
There were devout Jews from every nation staying in Jerusalem. When the crowd heard the disciples, they were bewildered, because each one heard the speaking in the native language of each. They were amazed and astonished and asked, “Aren’t they all Galileans? How can we be hearing in our own native languages?  What does this mean?

The sound that came from heaven-- that rushing violent wind-- was the exciting sound of old barriers being broken and glass ceilings shattering.  The divisions within humanity were being overcome.   The church was empowered to take to the streets with the good news.

The feast of Pentecost reminds us that the Holy Spirit still blows into our lives, to justify us by grace through faith, to set us free to accept ourselves and to love God and neighbor.
The same Holy Spirit who inspired the prophets and apostles and
gave birth to the church continues to prod, cajole, and urge us forward.    It’s been this way since the beginning of the church and will be this way as we are urged forward to live into God’s vision, until no child goes to bed hungry, until all God’s people are treated with dignity and have the basic necessities like safe water to drink and decent housing and a good education.
The Holy Spirit comes to us, to give us courage to pray without ceasing, to witness among all peoples to Christ as Lord and Savior, to unmask idolatries in Church and culture, to hear the voices of peoples long silenced, and to work with others for justice, freedom, and peace,[5]
Thanks be to God!
Amen!