"What Makes Jesus Weep?" A sermon on Luke 13:31-35 from Littlefield Presbyterian Church, preached February 21, 2016 on the Second Sunday in Lent. 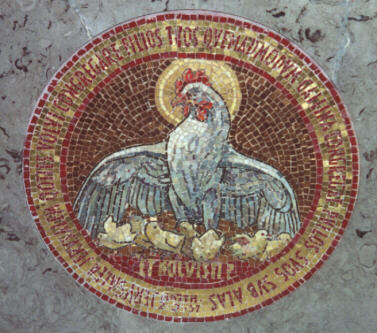 It was my great privilege to visit the Holy Land in 2006 and 2009.  I felt very moved by the sight of the Dominus Flevit chapel every time we drove near it.   This small church was built near the spot traditionally said to be where Jesus cried over Jerusalem. The church’s name, in Latin,  means “the Lord wept.”   The shape of the church is in the form of a tear drop.
The church features a beautiful picture window that faces west,   overlooking Jerusalem, in the direction Jesus was looking as he wept over the city.

Below the window, on the front of the altar, is a picture of what never happened in that city.  It is a mosaic medallion of a white hen with a golden halo around her head, which reminds us that Jesus compared Himself to a chicken.  The mother hen’s wings are spread wide to shelter the pale yellow chicks that crowd around her feet. The hen looks ready to protect her beloved chicks.
But that never happened, and the picture does not pretend that it did.  The medallion is rimmed with red words in Latin.  Translated into English it reads, "Jerusalem, Jerusalem, the city that kills the prophets and stones those who are sent to it! How often have I desired to gather your children together as a hen gathers her brood under her wings, and you were not willing!"   The last phrase is set outside the circle, in a pool of red underneath the chicks’ feet: you were not willing.
Reflecting on this passage, Barbara Brown Taylor writes, “ If you have ever loved someone you couldn’t protect,  then you understand the depth of Jesus’ lament.  All you can do is open your arms. You can’t make anyone walk into them. Meanwhile, this is the most vulnerable posture in the world --wings spread, breast exposed -- but if you mean what you say, then this is how you stand.[1]
It’s a very vulnerable stance when there are foxes or other predators around and you're the mother hen. When told that Herod wants to kill him, Jesus replies, "Go and tell that fox for me, 'Listen, I am casting out demons and performing cures today and tomorrow, and on the third day I finish my work. Yet today, tomorrow, and the next day I must be on my way, because it is impossible for a prophet to be killed outside of Jerusalem.'"

Jesus is in very clear and present danger as he faces Jerusalem.   He knows this.  Yet he intends to go on to Jerusalem and certain death, and he'll do it on God's timetable, not Herod's.   Jesus will be that mother hen who shields her chicks with her own body—and her very life.   If that fox wants them-- he will have to kill the hen first.
This is no abstract theory-- but the most concrete expression of love known to humanity.  Jesus is our own mother hen, whose wings were spread not in flight-- but in gathering.  When Jesus stretched out his arms on the cross, he did what every parent here is willing to do for their children. We are God's beloved children, and Jesus has done it for us.
"I must be on my way,"  Jesus said.    Must.  Jesus uses that word over and over to indicate the divine necessity to which he must be obedient.   Jesus announced to his disciples,  "The Son of Man must undergo great suffering, and be rejected by the elders, chief priests, and scribes, and be killed, and on the third day be raise."  This is what Jesus is about--  delivering God's grace because it is his divine calling.   It is what he must do.
Jesus went to Jerusalem to put that city and the whole world under his wings of grace.  That’s the strength we see in Jesus’ own mission.  He went to the cross in order to gather all of God’s children under the protection of God’s grace.
The strong, protecting hen—what a wonderful guiding image for the church’s ministry!  Seeing it as an image of strength and God’s protecting grace in Jesus Christ,  it can be the pattern for our life together as the church.   Acting as a caring hen, the church needs to seek out God’s children everywhere to bring them under the protective wing of God’s grace in Jesus Christ.
If the church is to be faithful to our Lord Jesus Christ, then his mission must be our own.  Jesus’ mission was to offer God’s grace to the world.
That’s a tall order.  Where in the world do we start?

I think we might start by looking around at our city…and our world…and asking ourselves, “What makes Jesus weep?”
Look around and see things that surely make Jesus weep:  the violation of basic human rights of so many of God’s beloved children… people in one of the richest nations of the world who lack adequate shelter or don’t know where their next meal will come from… so many of God’s beloved children being killed by gun violence… ethnic cleansing in the land we call Holy… God’s good creation being ravaged so carelessly… warfare… children around the world dying of hunger and malaria and AIDS… the children of Flint poisoned by lead in the water pipes…    The list could go on and on….
The litany of lament could be overwhelming.  But we follow Jesus the Christ, who proclaimed the reign of God…and broke the power of sin and evil…and calls us to follow him on the way.  This same Jesus claims us as his own and promises to be with us always…and gives us the power of the Holy Spirit to lead us further into God’s truth and freedom.  We have a great cloud of witnesses who have gone before us, showing us the ways they were faithful in their time and praying for and with us.
As a congregation   and in our personal lives, we need to look for the things in our world that make Jesus weep…and then—because we can’t do everything—we need to focus on where the world’s pain and need meet our deepest passions and our gifts and what we have to offer in service.
We face some problems in our time that can seem overwhelming and insurmountable.   But I think we can learn a lot from the activists who created a mass movement in Britain that swayed first public opinion…  and finally Parliament to abolish the slave trade and later slavery itself within the British Empire.  I would add that I think that all of us who have a passion for various peace and justice and interfaith issues could learn from them.
The 18th century activists overcame many of the obstacles faced by activists in our world:  lobbying by elites invested in the status quo, a legislature that delayed action in favor of “further study,” and a reactionary wartime political climate, to name a few.
As Adam Hochschild points out in his history of the abolition movement,[2]  antislavery organizers pioneered many tactics that continue to be used today:  speaking tours, mass boycotts, local chapters of national groups, and voter guides, all to fight an unjust economic system with global reach.
Throughout the 1700s, many thinkers were against slavery—in theory.  But a concerted, large-scale movement to end slavery seemed out of reach.   I’m sure it seemed like a hopeless cause to a lot of folk.        Other than John Wesley, many evangelicals spent the first four decades after the Great Awakening more interested in converting slaves to Christianity than in freeing them.  John Newton, who penned the hymn “Amazing Grace,” worked as a slave ship officer for six years after his conversion to the Christian faith, and was a minister for decades before he publicly opposed the slave trade.
But by the mid-1780s, the time was ripe for change.  The key to antislavery forces’ successes was a broad coalition, energized by Quakers and evangelical Christians but reaching across the political and social spectrum, including people of prophetic faith and shrewd politicians, progressives and conservatives, elites and outsiders.
William Wilberforce and his group of friends profoundly changed the political and social climate of their time.  Wilberforce was the son of a wealthy upper-class merchant family who was in a position to turn his wealth into increased social standing.   But then his life was changed.
As a young man, Wilberforce became a convert of the religious revivals that transformed 18th-century England.  At age 21 he got himself elected to Parliament.  His life and his vocation as a Member of Parliament were profoundly changed by his newfound faith, and he  became a force for moral politics.
In 1788 Wilberforce introduced his first anti-slavery motion into Parliament.  It was defeated, and would be defeated nine more times until it passed in 1807.  It was an historic and moral victory, but Wilberforce wouldn’t be satisfied until slavery was abolished altogether.
Wilberforce and a group of Christian fellow parliamentarians and lay people known as “the Saints” were behind many social reforms that swept England in the late 18th and early 19th centuries and worked tirelessly toward the goal of abolishing slavery, year after year.
Finally, in 1833, the House of Commons passed a bill abolishing slavery, and Wilberforce died three days later, his work finally done.[3]
In 19th-century America, religious revivalism was linked directly with the abolition of slavery and movements of social reform.  Christians helped lead the abolitionist struggle, efforts to end child labor, projects to aid working people and establish unions, and the battle to obtain voting rights for women.  Evangelical Christians fought for social causes.  For Evangelical Christian evangelists and leaders like Charles Finney, the gospel and the cause of working against slavery went together.
I believe our Christian faith calls us to a truly prophetic faith…to have a holistic faith that is united with the struggle for peace and justice.

What makes Jesus weep today?
I see Jesus weeping over our cities… over our world… over the way humankind has acted…  weeping over how we have failed to be the loving, generous, joyful people we were created to be…   weeping over the violence and oppression in our world.   I hear God lamenting over our unfaithfulness.  God grieves for us… and longs to protect us.
Jesus’ lament over Jerusalem follows a collection of parables that call for repentance.  I believe that Jesus’ lament over the city of Jerusalem is less a final judgment on the city and more a call to repentance.   It calls us to listen for God’s word for us today.
During these days of Lent, I pray that we will be nurtured to grow more and more into Christ’s image.  Through our personal spiritual practices and our group studies and our worship, may we be fed, so we can grow from chicks into chickens, so we can give what we have received…  and teach what we have learned…and love the way we ourselves have been loved…by a mother hen who would give his life to gather us under his wings.
Amen.  So be it!
[1] Barbara Brown Taylor, in a sermon “As a Hen Gathers Her Brood," The Christian Century, February 25, 1986.