"Filled With the Holy Spirit. A sermon from Littlefield Presbyterian Church on the First Sunday in Lent, February 14, 2016. 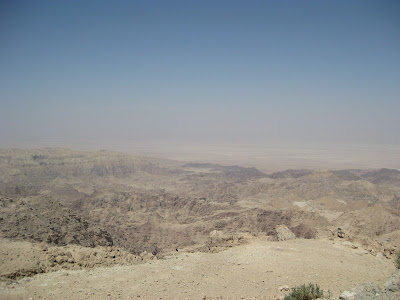 "Filled with the Holy Spirit"

On this First Sunday in Lent, we are invited to follow Jesus into the wilderness, where he was tempted for forty days.  These forty days echo the forty days Moses spent fasting while writing the covenant for the people of Israel,[1]  and also the forty years the Israelites spent in the desert experiencing their own temptations.  It’s no coincidence that Lent is forty days.  So, as we follow Jesus into the wilderness, I hope this story can challenge and encourage us in our own forty days of Lent.
If you were here on Baptism of the Lord Sunday, you remember that John the Baptizer had been going around the region around the Jordan, proclaiming a baptism of repentance for the forgiveness of sins, as it is written in the prophet Isaiah:  “The voice of one crying out in the wilderness…”

When Jesus had been baptized and was praying, heaven was opened, and the Holy Spirit descended upon him in bodily form like a dove.  And a voice came from heaven, “You are my Son, the Beloved.  With you I am well pleased.”
At the age of 30, the man Jesus of Nazareth came to know that he was the beloved Son of God.
Afterward, Jesus, full of the Holy Spirit,  was led by the Spirit in the wilderness, where for forty days he was tempted by the devil.  He needs to decide what kind of son he’s going to be.     The wilderness is hot and barren.  The gospel tells us that "he was famished."
From somewhere comes a voice-- "If you are God's Son,  then command this stone, so that it becomes bread."  And Jesus remembers John...   the Jordan River...  the sky opening and a voice thundering,  "You are my SON...  the beloved."
But now there’s a different voice:  "If  you are God's Son...   if you are God's Son."   A rounded stone could become a loaf of  bread.   Who could it hurt?   If he is God's child--  then why shouldn't he have what he wants?  The TEMPTATION is to turn away from the way of SACRIFICE and SUFFERING… and to serve himself.  The temptation is for Jesus to use his authority as the Son of God to meet his personal needs and desires.
The first temptation in the gospel story is to choose the easy life.  We end up hungry for the wrong things.  The life focused on security…  worldly success… or play...  or earthly pleasure--  is a life spent looking for substitutes for communion with God.
We're tempted to avoid hard things like FORGIVENESS.  Somebody says something thoughtless that makes you feel stupid...   or devalued.  Someone you thought was your friend hurts you deeply.  We should forgive.  But it's a hard part of following Jesus.
Jesus understood the temptation of the easy way. But he knew:  "One cannot live by bread alone.”

The adversary tries again.   This time, the temptation is an appeal to the human desire for power.    “If you will worship me, all the kingdoms of the world will be yours.”    Jesus is offered the authority and glory of all the kingdoms of the world.  This was a temptation to embrace what many would have expected of him as the Messiah:  political and military might and rule.
Jesus could have chosen success… and prominence or wealth-- instead of redemptive suffering.  But he didn’t.
That Jesus rejects this is a clear sign that his messiah-ship, his kingdom, will be a different kind of kingdom than people were expecting.  Jesus’ mission isn’t about asserting worldly power, but about saving others, about sacrificial service.

The tempter tries again.  “If you are the Son of God,  throw yourself down from the pinnacle of the temple…”   You know what the scriptures say,  "God will protect you."
As Shakespeare pointed out,  "There is no error so grave but that some sober brow will not bless it with a proper text."    Even Satan quotes scripture.
First century Jews believed that when the Messiah came, he would reveal himself from the temple roof.  Jesus could be the Messiah the people wanted--  if he would do what they expected.
This may be partly a foreshadowing of the crucifixion and a temptation for Jesus to save himself from death.      But this temptation seems to be about another alternative path for Jesus’ power, leading to fame and riches, rather than to service and the cross.
Out in in the wilderness, Jesus had to answer the hard questions about who he was and what his mission would be.
Out in the wilderness, Jesus faced these three decisive issues in the process of spiritual maturity-- issues each of us has to work through,  if we want to tackle the challenges of life with a strong sense of who we are and whose we are.
It might be easier if the Evil One appeared in a red suit with a pitchfork, so he's easy to identify.  But often the tempter appears as a sensible way to meet our worldly needs--  or at least our selfish desires.  When we give in to those temptations-- we push ourselves away from God and God’s will for our lives.
Jesus was continually tempted to make it easier for himself.  But he kept foregoing comfort...  applause..  and wealth to be true to his God-given identity.   Jesus was never freed from temptation, and we won’t be either.

So--  why do we keep giving in to temptation?   I think it’s because we give in because we FORGET.
Jesus' antidote for temptation   was REMEMBERING.  When he was tempted, he was able to come back with the words of the SCRIPTURES.   He remembered who God is,   and how God works.

What’s at stake here is a question of IDENTITY.  Who is Jesus?  Who are we?
One of the saddest conditions a person can face in life is AMNESIA--  not knowing who you are.  It’s frightening when a person doesn’t understand what life is about…  when life has no meaning or purpose.
That’s what made Willy Lohman such a pathetic character in Arthur Miller’s play, Death of a Salesman.  After Willie committed suicide, his son Biff says that the heart of his father’s problems   was that he didn’t know who he was.
Knowing who you are   and whose you are   is essential to your wholeness as God’s child, and to your awareness of what God wants you to do with your life.    Satan’s primary objective isn’t getting you to do something wrong--  but to get you to forget WHO YOU ARE.  The Adversary wants you to lose your identity…  and your sense of belonging to the family of God.
The ways Satan tries to convince  us that we don’t deserve God’s love are subtle and clever.  And these temptations--  like the temptations of Christ--  are far more treacherous than an impulse to disobey one of the commandments.

Think about this tricky question:  “If you are a child of God, then why don’t you feel more like one?   This can be deadly, because sometimes we don’t feel much like a beloved member of God’s family.  The temptation is to believe that--  if you’re not feeling like a child of God--  then maybe you aren’t.
Or about this temptation:  “If you are a child of God, why don’t you act more like one?
When we’re tempted to forget who we are, we’re in a kind of spiritual desert.  The word “wilderness” or “desert” has often been used as a symbol for being lost spiritually.  Sometimes we don’t feel or act like children of God.  Sometimes it seems as though we’re wandering around in a wilderness, not knowing who we are.
Being in a wilderness place is an unavoidable part of the Christian walk.  We fight some of our greatest spiritual battles when we’re out in the wilderness.  It’s a time when we’re confronted with ourselves..  and we need to clarify what it is that we want or desire more than anything else.
When we're tempted to forget who we are...   when we're tempted to take the EASY way--   we're called to follow Jesus’ example.  Jesus went back to the scriptures that he learned as a child… the stories he’d heard at home and in the synagogue.  He remembered the things God had done for him.  He recalled the truths God had spoken.
That’s what we’re called to do. We need to remember this story of Jesus in the wilderness.
There were no witnesses to this event but Jesus.  So he must have told the disciples-- in the hope that they would remember.
Remember that we have a savior who understands our struggle.  Remember how Jesus, filled with the power of the Spirit, returned to Galilee and made it clear what his mission was in his inaugural speech in the synagogue in Nazareth:
“The Spirit of the Lord is upon me, because he has anointed me to bring good news to the poor.  He has sent me to proclaim release to the captives and recovery of sight to the blind, to liberate those who are oppressed, to proclaim the year of the Lord’s favor.”
It is hard to resist the power that the world loves and values.  But in the beginning of today’s gospel lesson is the promise.  You don’t do this on your own.  “Filled with the Holy Spirit.”  And you are.  That is your promise.  “Filled with the Holy Spirit” is God’s promise that extends beyond Luke to Acts.
In the beginning of Acts, we hear Jesus’ promise:  “You will receive power when the Holy Spirit has come upon you; and you will be my witnesses in Jerusalem, in all Judea and Samaria, and to the ends of the earth.”
“Filled with the Holy Spirit” is not a one-time thing or a temporary truth, but an eternal promise for God’s people.
The good news is that, beginning with our baptism, God claims us and calls us and by the Holy Spirit gives us the power we need to carry Christ’s saving love into the world.
So remember who you are:  a beloved child of God, claimed by God’s grace… and called to work in partnership with Christ to embody God’s love and to work for reconciliation and justice and peace in the world.
Thanks be to God!
Amen!

Posted by RevFranMusings at 3:05 PM