"Why Are You Afraid?" A sermon on Mark 4:35-41, preached at Littlefield Presbyterian Church on the Sunday after the massacre of 9 people at prayer at Emanuel AME Church. 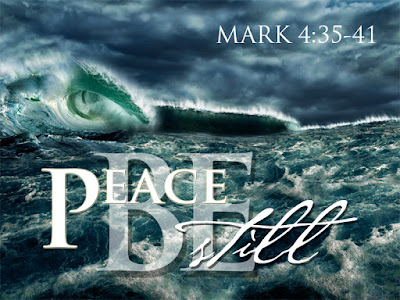 “Why are you afraid?   Have you still no faith?”

This particular storm will pass.  But for now, for some of us, the storm feels overwhelming.  For now, it’s time to grieve the loss of precious lives.  Lives that matter to their families and friends and their community.  Our brothers and sisters in Christ, whose lives need to matter to us.   As the apostle Paul writes in First Corinthians 12,  “when one member of the body of Christ suffers, the whole body suffers as well.”

I imagine our African-American brothers and sisters around the country may be feeling uneasy as they gather for worship today and in the weeks to come.  I imagine if I were African-American and were attending an African-American church, I might be feeling uneasy if I  saw an unfamiliar white face, someone who nods but doesn’t seem to warm up to the people around him.   Could he be a Charleston copy-cat?  Could he be a white supremacist?  I wonder how safe I’d feel.
There have been at least six shooting incidents at houses of worship in our nation in the past seven years,[8]  along with all the shootings at schools and elsewhere.  It seems like a storm of violence and hatred has permeated our society.

Meanwhile, back in the boat.  The disciples must have been exhausted after the day's activities.  They may have had some qualms about crossing to the other side of the sea, which was gentile territory.  As Jews of that time, it would have been a new idea to them that God's salvation included non-Jews, people who were “other.”
The winds were battering against the boat.  It was filling with water. The disciples had plenty of reason to be terrified.
In the midst of all of this, where is God?  "Don't you care that we are perishing?"
Jesus had been sleeping through the storm, which was a sign that he trusted in God to keep them all safe.
Jesus woke up and rebuked the wind, and said to the sea, "Peace!  Be still!"
And the wind ceased--  and there was calm.

Then Jesus said to them, "Why are you afraid?  Have you still no faith?"
When we follow Jesus, when we obey the command to cross over to “the other side,” to be with others who are different from us… when terror strikes, the storm can feel overwhelming.
Jesus rebukes the storm:  “Peace! Be still!”   But the peace of Christ is never passive.  It’s never just an absence of conflict or trouble.  We are called to “pursue peace with everyone.”[9]
My friend and Lutheran colleague Colleen Niemann forwarded  a response to the massacre in Charleston from the Rev. Elizabeth Eaton, Presiding Bishop of the Evangelical Lutheran Church in America.  Bishop Eaton writes, “It has been a long season of disquiet in our country.  From Ferguson to Baltimore, simmering racial tensions have boiled over into violence.  But this ... the fatal shooting of nine African Americans in a church is a stark, raw manifestation of the sin that is racism….”

I’ve been heartsick over what happened this week in Charleston.  I’m heartsick that people keep dying.  Yet I have to admit that I’ve felt afraid to speak too prophetically about this.  I like to be liked and appreciated.  I don’t like it when people are upset over a sermon.
But Jesus calls us to set out in the boat.  We’re called to pursue peace.  We are entrusted with a ministry of reconciliation.  We are called to love all the people God loves.
If we are going to follow Jesus, we need to follow him into the storm.  If we want to stand with Jesus, we need to stand with those who have been weathering the storm for a long time, because that’s where Jesus is.  It can be scary.
But I’m hopeful.  I really want to be hopeful.  I’m hopeful that now is the time.  That now is the time when we say “enough.”  Now is the time for us to stop being afraid of the hard conversations about race and privilege and gun violence.  Now is the time for us to commit ourselves  to living into the Beloved Community, which is just another way of talking about the Kingdom of God.  Now is the time to find ways to work together with our neighbor congregations, to find energy and encouragement from one another—because we’re all in the boat together.
Jesus never promised us that we could stay safely on the shore, where things are familiar and comfortable.  But he does promise to be with us always.
We can trust in God’s promises,  that God will be with us always.  That’s what “Emmanuel” means.  God with us!
Amen.

Posted by RevFranMusings at 12:21 PM