"Jesus' Mission and Ours." A Sermon on Luke 4:14-21 from Littlefield Presbyterian Church 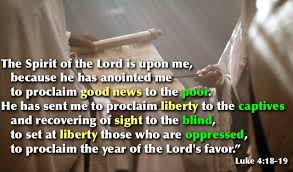 "Jesus' Mission and Ours"


We’re in the season after Epiphany.  A few weeks ago, on Baptism of the Lord Sunday, we heard how when Jesus was baptized and was praying, heaven was opened, and the Holy Spirit descended upon him in bodily form like a dove. And a voice came from heaven: “You are my Son, the Beloved. With you I am well pleased.”
Afterward, Jesus was led by the Spirit in the wilderness, where he was tempted by the devil for forty days. Then Jesus, filled with the power of the Spirit, returned to Galilee, and he began to teach in the synagogues.
When Jesus came to the synagogue in Nazareth on the sabbath, he stood up to read, and the scroll of the prophet Isaiah was handed to him. He found the passage that confirmed who he was and what his mission was and read it: “The Spirit of the Lord is upon me, because he has anointed me to bring good news to the poor. He has sent me to proclaim release to the captives and recovery of sight to the blind, to let the oppressed go free, to proclaim the year of the Lord’s favor.”  He began to say to them, “Today this scripture has been fulfilled in your hearing.”

In the midst of everything we see around us in our world, in the midst of a transition in pastoral leadership in this congregation, the scriptures still speak to us today.
In February, I’ll be attending a Transitional Ministry training event in Oregon. One of the books I’m required to read in preparation is Changing the Conversation: A Third Way for Congregations, by Anthony B. Robinson.  It’s quite a helpful and readable book, and I commend it to you.

In this book, Robinson tells how management guru Peter Drucker was known for asking two simple but revealing questions of his clients: “What business are you in?” and “How’s business?”
Robinson was interviewing with a pastor search committee when he asked a similar question of them: “What do you believe this church is trying to accomplish for God?”  The question caught some members of the committee by surprise and left them groping for words. One man looked slightly troubled by the question. He said, “Well, we’re trying to do what we’ve always done, of course.”
This response, Robinson wrote, shows a lack of clarity about purpose.
Over time, organizations tend to lose sight of whatever purpose called them into existence in the first place    or they may drift away from it.  When they’re not centered on their purpose, they devote a lot of their energy and resources to their own survival or maintenance.

When congregations aren’t centered in a clear and compelling purpose, they tend to become reactive. “They try to respond to every need, itch, hurt, and crisis that comes along. And that is a recipe for burnout, because people’s needs, itches, and hurts are limitless and endless.”
Also, when there’s a lack of shared purpose, congregations and pastoral leaders tend to become too focused on trying to keep everybody happy and together.  You might hear people saying things like, “We can’t do that—so and so says if we do, they’ll leave the church… or withhold their giving…” or whatever. When there’s a lack of a strong sense of shared purpose, a few people can hold the congregation hostage and keep the leaders and the congregation from moving forward in new directions.  It is indeed a recipe for burnout.

As disciples of Jesus Christ, we have a mission to fulfill.  When we listen carefully and prayerfully to the scriptures-- we discover that God's Word speaks directly to us.  It suddenly can become very exciting...and very energizing.
As Anthony Robinson puts it, “vital congregations have a compelling, biblically shaped, theologically informed purpose or reason for being that marshals their energies and resources and directs their use.”

Littlefield Church has gone through a lot of changes over the years. The community and the world around the church have changed.
When this congregation was planted, it was going to be a neighborhood church. The way they envisioned things in the beginning, they weren’t going to need a parking lot, because people were going to walk to church from their homes in the nearby neighborhoods in Dearborn or Detroit, or drive a short distance.  That worked well for several decades. There was a time when there were two Sunday services, with people sitting in the balcony and an overflow room, when Littlefield had assistant pastors and Christian Education directors. In 1960, Littlefield’s membership peaked at 1,250.

That was a pivotal time in local churches and on a national level, as church denominations lost anywhere from a quarter to a third of their members, and baby boomers deserted their childhood churches in large numbers.
This was the beginning of some challenging times for Littlefield Church. The Rev. Harry Geissinger was called to serve as senior pastor in 1961, bringing the strong visionary leadership the congregation needed.
The 1960’s and 1970’s were tumultuous times in our society, in the world, and in the church. The civil rights movement, the war in Vietnam, changing attitudes toward institutions, and many complex and divisive issues all had their impact on the church.

Life in the metropolitan Detroit area was marked by social upheaval and a series of crises in the 1960’s, including block-busting, cross-district busing for schools, and the 1967 race rebellion. Beginning in the late 1960’s, Littlefield struggled with the impact of “white flight” out of its nearby Detroit neighborhoods and significant growth in the number of Arab-Americans of Muslim and Eastern Orthodox faiths in its Dearborn neighborhoods.
The Civil War in Lebanon, beginning in 1974, resulted in a rise of Lebanese immigrants into Dearborn and dramatic changes in the demographics of the neighborhoods near the church. Then, in 1978, the Israeli invasion of southern Lebanon sent waves of Southern Lebanese Shia Muslims into Dearborn. You can read more about this in the history booklet we wrote for the 75th anniversary of the church. (A lot of it is included on the Facebook page we posted for the 85th anniversary.)[1]
As the Littlefield history document states, these changes in the community had the result of reducing the size of the Littlefield congregation and expanding the mission.
Looking back on this time, a mission study observed, “In the face of tremendous social changes going on all around it, Littlefield Presbyterian Church did not split apart or turn in on itself, it didn’t close down or lose faith, thanks in large measure to the commitment and talents of Rev.Geissinger. The church was blessed with strong clergy and lay leaders and a congregation committed to new ideas and approaches. With these assets, the church survived the turmoil of the ‘60’s and ‘70’s.”

Then, in the mid- to late-seventies, a need emerged and was identified: to develop a relationship with our Arab-American neighbors, to bridge cultural differences and overcome misunderstandings among Christians and Muslims. Since that time, Littlefield Presbyterian Church has taken a leadership in carrying out a ministry of reconciliation.
Dr. William Gepford arrived in 1979 to begin his work as Director of Arab-American Relations in Dearborn and Assistant Pastor of Littlefield. This was a result of “a strong sense of mission and faith in the future,” following months of discussion, careful planning, and broad-based fund-raising….”[2]
Over those decades, the membership numbers of Littlefield and other churches were declining. But Littlefield was doing important work building bridges, promoting understanding between Christians and Muslims and members were reflecting the light of Christ as they served the needs of the new neighbors.

In 1994, after the resignation of the Rev. Del Meester, the church did another mission study. This is what they declared about the church: “Outreach to the community is at the heart of Littlefield Church’s ministry….Our primary challenge is the one that has always faced Christians: to discern what God is calling us to do, and to reflect and model God’s love, justice, and peace….The members of Littlefield believe that the work of the Holy Spirit among us gives us energy and mission and that we are called by God to reinvent and reorient ourselves with regard to who we are and what we do as God’s people.”
It was after this mission study and an interim period that I was called to serve as your pastor. Over the 22 years that have followed, we’ve worshiped and studied and learned and grown and served God and our neighbors and witnessed to God’s love and justice and peace together.
Now, you’re entering a new time of transition. Though, truth be told, we’ve been on a journey of transformation over these past few decades. We’ve been learning and growing and studying. Within the past few years, we’ve worked together to come up with a brief statement of purpose:
“Why we exist: To love God, one another, and all people. To show God’s love in our work for peace and justice.” Two short sentences to summarize why you exist as a congregation. You also worked on a list of your CORE VALUES.
We worked on the statement of purpose because mission can't be an optional activity for the church.  The church exists for mission.
If a congregation desires to be a vital, growing community of believers, with a faithful future, they need to resist the temptation of quick, simple answers, follow Jesus’ example, and spend time in the wilderness to discern God’s will.  They need to open themselves to the leading of the Spirit, so they can discover more fully the calling God has for them in this particular time.
The good news is that we can trust in God the Holy Spirit, “everywhere the giver and renewer of life." We can trust that, in a broken and fearful world, the Spirit gives us courage to pray without ceasing, to witness among all peoples to Christ as Lord and Savior, to unmask idolatries in Church and culture, to hear the voices of peoples long silenced, and to work with others for justice, freedom, and peace.…
“With believers in every time and place, we can rejoice that nothing in life or in death can separate us from the love of God in Christ Jesus our Lord.”[3]
Praise be to God!
Amen!

Posted by RevFranMusings at 11:14 AM

Email ThisBlogThis!Share to TwitterShare to FacebookShare to Pinterest
Labels: Luke 4, mission, purpose, the spirit of the Lord is upon me, transformation