"Saying Yes to God." A Sermon from Littlefield Presbyterian Church on the Fourth Sunday of Advent.: 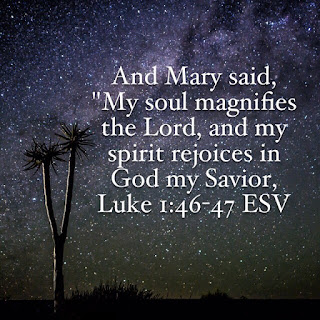 Angels don’t show up very often in the Scriptures.  But when they do appear, usually something big... strange...and wonderful is about to happen.
The angel Gabriel came to tell Mary that she had been chosen by God to help change the world, by bearing the Christ.
Though Gabriel called Mary "favored one,” she apparently didn't feel favored-- at least not at first.  She felt perplexed.  “How can this be?”
And yet Mary responded to Gabriel by saying, “Here am I, the servant of the Lord.  Let it be with me according to your word."
In other words, Mary says, “I'm not sure what all of this means.  but nevertheless, here I am, ready to be of service in God's work.  Whatever you say, God."
What a wonderful, faithful thing for Mary to say!   It couldn't have been an easy decision for her.  Change never is.
There was a lot at stake for Mary.  She was a young peasant girl from a small village.  Her marriage to Joseph had been arranged.
Mary was poor...  and vulnerable.   As a female, her economic SURVIVAL depended on marriage.  Her security depended on her attractiveness as a wife and mother.      So-- what did it mean for a girl like Mary to say yes to God’s plan?
It meant risking all that she had hoped for...   all her plans for her life.    It meant risking her security.  And it meant risking her very life.  The penalty for a woman caught in adultery in her day could be execution by public stoning.  If Joseph believed that her pregnancy was a result of an illicit affair, then-- by law-- Mary could be taken to the edge of town and stoned to death. At the very least, Mary would be disgraced in the eyes of the people of the village. She’d be damaged goods.
Mary's story reminds us that to be God's servant in the world means risking radical changes in our priorities.  It means placing our very lives into God's hands.   It means trusting in God to care for us—even through dangerous times.
Yet Mary responded in obedience and trust and courage.   "Here I am, Lord."  I'll be your servant."
Now, Mary has reason to be afraid.  Luke tells us-- after the angel left-- Mary hurried to visit her elderly cousin Elizabeth, who had been unable to bear children all her life.  As proof that nothing is impossible with God-- the angel Gabriel had told Mary that Elizabeth was six months pregnant in her old age.
When Elizabeth hears Mary's voice, the child leaps in her womb, and she knows that she has been especially touched by God.  Filled with the Holy Spirit, Elizabeth calls out:  "You are blessed among women.  Blessed is she who believed that God's promise would be fulfilled!"
By declaring both Mary and the fruit of her womb “blessed,” Elizabeth begins a series of blessings that weave through Luke’s birth narrative and intensify its tone of joy and praise.  Mary, Zechariah, and Simeon will all add their blessings, praising God for what God is doing at this moment in history   and recognizing that those who are privileged to be instruments of God’s saving work have been richly blessed.
Mary starts singing a song the church is still singing today-- a song we might think of as the first Christmas carol.  Her song is a song of joy and praise.      "My soul magnifies the Lord, and my spirit rejoices in God my Savior, for he has looked with favor on the lowliness of his servant.  Surely, from now on, all generations will call me blessed."
Mary sings about the God who saves not just souls, but embodied people. The God she celebrates isn’t content merely to point people toward heaven. God’s redemptive work begins here on earth. God fills the hungry not only with hope, but with food.  God isn’t satisfied with comforting the lowly, but lifts them up, giving them dignity. This is a merciful and subversive song, that sings of how God shows strength by disrupting the world’s power structures, bringing down the powerful from their thrones, and lifting up the lowly.

Do you wonder?  How was such radical obedience and openness on Mary's part made possible?  How did she get from saying, “How can this be?”—to “Let it be, according to God’s word”?
I think it grew out of the sense of trust that had developed in her as she heard the stories of the God of Abraham and Isaac and Jacob...  and how God had always dealt with her people.  That long history had taught her two things about God-- that God was utterly mysterious...  and yet always good.   God's ways are almost never obvious...  but they inevitably work out better than we could imagine.   And that's some of the good news of God.

The old King James Version puts part of Mary’s song of praise this way: “He hath scattered the proud in the imagination of their hearts.”  I think that’s an especially apt translation, for it is by our imagining, by what our hearts picture in fear or desire, that we humans are pushed and pulled to act-- or not.
Imagination can be a channel for oppression or destruction—especially when fear and resentment prevail.  But it can also serve to gather and bless and inspire us.

We live in a society in which the gap between the rich and poor keeps widening…  a society in which many people of goodwill are finding it important and necessary to declare that black lives matter… where it’s important and necessary to stand in solidarity with our Muslim neighbors and with refugees and people seeking asylum.    We live in a time of fear and suspicion of people who are different… and a growing number of people believe they need guns to protect themselves against all the terrible things they imagine.
We live in a world in which many people lack adequate food or safe water or shelter or sanitation.   The ways of the world seem to have taken over, and mercy is in short supply.  But it doesn’t have to be that way.  Mary models for us a way of joyful, hopeful obedience, working with God to change the world, hoping in God’s promises.
If we aim to follow the Jesus whose birth we await this season, we will need to extend hospitality to strangers instead of building walls to keep them out. We will feed the hungry, tend the sick, and welcome little children instead of firing tear gas at them or punishing them for being brought across our borders by parents who are desperately seeking safety.
When our fears get the best of us and tell us to build walls to keep people out or to arm ourselves to keep ourselves safe, I hope and pray that we will instead run with Mary to Elizabeth—to the arms of a faithful covenant community that will remind us of God’s many blessings and embolden us and help us to see the face of Jesus in the faces of those who are marginalized.
If you read through the first few chapters of Luke, you’ll notice that several songs.   Mary sings the “Magnificat” in today’s story.  Zechariah sings when his son John is born and his tongue is finally loosened.  The angels sing of peace and goodwill when they share their “good news of great joy” with the shepherds.  And Simeon sings his song of farewell when he has seen God’s promises fulfilled.
Why all these songs?  I think David Lose is right when he suggests that singing can be an act of resistance.   African slaves knew this.  When they sang their spirituals, they were praising God and also protesting the injustices of their lives and pointing the way to freedom.
The civil rights leaders in our nation knew this, too, as they sang their freedom songs.
The protesters in Leipzig in 1989 knew this as well.  For several months before the fall of the Berlin wall, the citizens of Leipzig gathered on Monday evenings by candlelight around St. Nikolai Church—the church where Bach composed so many of his cantatas—to sing.  Over two months, their numbers grew from a little more than a thousand people to more than three hundred thousand—over half the citizens of the city.  They sang songs of hope and protest and justice, until their song shook the powers of their nation and changed the world.
Later, when someone asked one of the officers of the Stasi, the East German secret police, why they didn’t crush this protest like they had so many others, the officer replied, “We had no contingency plan for song.”[1]

Today, I hope we will sing Mary’s song of praise with her...  and watch for signs of how “the world is about to turn.”
A lot of what we do when we come together in worship is practicing this imagination of the heart, by the gift and command of God.  In the liturgy, we imagine that love rules already, that the lowly are lifted up, that death is conquered, sin cleansed away... peace triumphant...and Christ touched and seen and tasted.  On the verge of Christmas, we imagine and sing with Mary.
Imagine with the Magnificat its dream of a justice that re-distributes wealth and privilege and power, so that everyone has what they need.   Imagine a world where the lion and the lamb can be together in peace… where those who have been proud and rich can be in solidarity with those who yearn for a turning of the socio-economic tables… imagine discovering that there can be enough for everyone in God’s realm…and remember that we're invited to participate more fully in God's saving work in the world.
Mary was invited to bear Christ.  And so, my friends, are we.
We can choose to say YES to God, and open ourselves to let God use us as instruments of love and grace and mercy and justice and peace.
Today’s gospel story is about Mary.  But it’s your story and mine as well.  God has chosen each of us, favored each of us, graced each of us, and spoken God’s Word to, over, and in each of us.
By the power of God’s Spirit, God has descended upon us and conceived Christ in us.   We are called to be God-bearers, a calling that can bring with it extraordinary privileges as well as significant hardships.  But the promise remains the same: nothing is impossible for the One we serve and bear.
We are called to bear the love of Christ out into the world...  and to let it transform the world, as it transforms us.
" Let it be with me, according to your word.”
" Let it be with us, according to your Word.”
Let it be!

Posted by RevFranMusings at 5:54 PM

Email ThisBlogThis!Share to TwitterShare to FacebookShare to Pinterest
Labels: angel, Gabriel, let it be according to your word, Luke 1, Magnificat, Mary, My soul magnifies the Lord