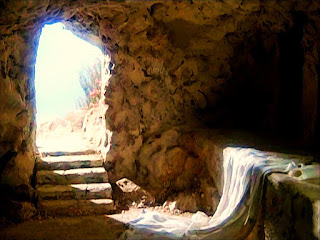 "Not the End of the Story"

We live in a world can be a frightening place.  Sometimes we can feel overwhelmed by all the pain and suffering... hatred and evil we see.
The women came to the tomb expecting to see a place of death and defeat.    They thought the powers of this world had had the last word.
But the God we worship and serve hears the suffering of marginalized and oppressed people and cares… and “acts with justice and mercy to redeem creation.”  The Living God will have the last word, because love is stronger than evil.  That’s part of the good news of Easter.
Jesus came to live among us, full of grace and truth[3]… and “proclaimed the reign of God… preaching good news to the poor and release to the captives… teaching by word and deed…and blessing the children…healing the sick and binding up the brokenhearted…eating with outcasts… forgiving sinners… and calling all to repent and believe the gospel.”[4]
When Jesus challenged the religious authorities and the empire with his vision of love and justice and transformation, the empire executed him.
Just as surely as that first Good Friday was the domination system’s “no” to Jesus, Easter is God’s “yes” to Jesus and his vision… and God’s “no” to systems of domination and oppression.
Our Easter faith assures us that in Christ's death on the cross and his resurrection, God has already overcome the power of death and evil.  The old life is gone.  A new life has begun[5]—a life of gratitude and joy...  a life in which the Holy Spirit sets us free to accept ourselves and to love God and neighbor, and binds us together with all believers in the one body of Christ, the church.

God's redemptive purpose for the world will prevail through those who answer Christ's call to follow him and carry on his purpose and work.
The good news is that we are not alone.  In a broken and fearful world, the Spirit gives us courage to pray without ceasing, to witness among all peoples to Christ as Lord and Savior, to unmask idolatries in church and culture, to hear the voices of peoples long silenced, and to work with others for justice, freedom and peace.[6]
That’s how the rest of the story continues.

Giacomo Puccini, who wrote such great operas as Madame Butterfly and La Boheme, was stricken with cancer in 1922.  He decided to write one more opera entitled Turandot.
One of his students said, "But suppose you die before you finish it?"
"Oh, my disciples will finish it,"  Puccini replied confidently.
Puccini died in 1924, and his disciples did finish the opera. Puccini's best friend, Franco Alfano, worked from sketches left by the composer to complete the opera, which many consider it to be his best work.
The premier took place in Milan, Italy, at La Scala Opera House.  Arturo Toscanini, one of Puccini's best students, was the conductor.  The performance began and continued to the point at which Puccini's work had abruptly ended.  Toscanini paused and said to the audience, "Thus far, the master wrote...   and then the master died." Then he picked up the baton and shouted to the audience, "But his disciples finished his music!"[7]

As disciples of Christ, we are called, as individuals and as Christ's church, to be about the task of finishing the music whose melody and direction we can discern in the acts of God in history   and in the life and teachings of Jesus.
God calls us to live beyond our fears and doubts.  In the resurrection, God showed us his amazing, life-giving power.  We know that the story of our life with God has a joyful ending.
Go.  Tell.  As Christians, we are called to take risks...  to make ourselves vulnerable in love...  to share with strangers...  and to dare to challenge unjust power.
God, in the life, death, and resurrection of Jesus the Christ, is making all things new, and we are called to be a part of this new life.   So, go.  Tell.
Christ is risen!  Alleluia!

[2] Wolsey, “Why They Killed Jesus.”
[3] John 1
[4] “Brief Statement of Faith,” Presbyterian Church (USA), 1990.
[5] “The old life is gone; a new life has begun” is part of an assurance of forgiveness that we hear often during the corporate act of confession in Presbyterian worship.
[6] “Brief Statement of Faith.”
[7] I’ve read several versions of the story of how the opera Turandot was finished after Puccini’s death, which agree on most points. One source says the premier performance stopped at the point where Puccini died, and that it was followed the next day with a performance of the completed work. In any case, the disciples carried on and completed the work.

Posted by RevFranMusings at 1:21 PM