"Living the Questions." A Sermon from Littlefield Presbyterian Church on Matthew 16:13-20. 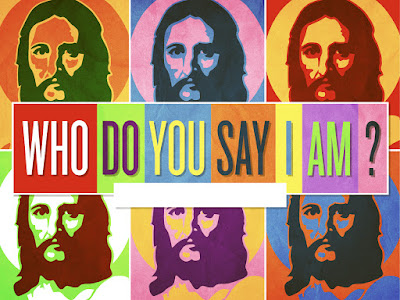 “Who do you say Jesus is?” is one of the most challenging and important questions in the gospels.  Knowing that his time with his disciples will be coming to an end, Jesus periodically tests their understanding.
Jesus asks his disciples, "Who are the people saying that the Son of Man is?"
The disciples give four answers.  Some think of Jesus as John the Baptist, others as Elijah, still others as Jeremiah, and some say one of the prophets.  Some people are identifying Jesus with dead prophets who had been sent by God who did miraculous deeds and who had stood toe-to-toe with kings, speaking truth to power, in words of challenge, opposition, and hope from Yahweh.
Each of these ideas makes sense in some way.  But each of these popular understandings fails to discern the depth and fullness of Jesus’ identity.  The people look at Jesus, but they only see the reflection of religious ideas from their past.  They have a hard time imagining that God could be doing something new.

The true identity of Jesus is at the very heart of the gospel message and the Christian movement.  Jesus has been described as a great teacher of wisdom, a social reformer, a champion of individual freedom and worth, or a revolutionary.  There are grains of truth in all of these ideas, but, as Tom Long says, in each case people have “pounded a peg labeled “Jesus” into a hole drilled to fit into their own religious preconceptions.”[1]
When Jesus asks the disciples, “Who do you say I am?”-- they named some of the incomplete and mistaken understandings of who Jesus is. Then Peter blurts out,  "You are the Messiah, the Son of the living God."

Something in the way Peter says those words or some uncertainty in the disciples' voices causes Jesus to recognize that they had pronounced the truth without actually comprehending it.  So Jesus tells the disciples to be quiet and not to tell anyone that he was the Messiah.  But, if they can’t tell anyone, how will they build an ekklesia-- a gathering of those called--on the truth of his identity?
I think Mitzi Smith puts it well when she says “by the life they live, a life of love for God, a life that loves the other as much as one loves herself, and a life in pursuit of justice and peace.”  The disciples’ lives “will speak louder, more truthfully, and more effectively than their words.”[2]
Mitzi envisions the kind of church it could be. “On this rock, thou shall not build a prison nation. On this rock, thou shall not build a nation where millions of children are homeless and hungry…. On this rock, let us build assemblies that demonstrate belief in a living, speaking, incarnating God, a God of freedom and not of oppression, a God of justice, love, and peace.”
Who are the people saying Jesus is?  Who do we say Jesus is?  What do our lives say about who we believe Jesus is?
Every day, our faith calls us to live in the midst of these questions. We live in the tension between the prevailing and popular pronouncements we hear and our daily confessions of who we know Jesus to be through our study of the scriptures and prayer and living in a community that encourages and challenges us.
When people claiming to be Christian leaders support unjust policies--who are they saying Jesus is? When people say, “We are a Christian nation,” but fail to care for those who are hungry or homeless or oppressed-- who are we saying Jesus is?

When Jesus asks his disciples “Who do you say I am,” Peter comes forward and speaks up. He figures out what he needs to say, what he believes, and he says it. So I think it’s important to ask: Does Jesus say he will build his church on Peter because he got the right answer? Or because he spoke up?  (I don’t have a simple answer for you on this. I’ll just let you ponder it.)
I believe our faith can empower us to step up--out of the crowd or in the middle of the masses, or in the face of idolatries.  We need to pay attention to what we see going on and keep asking, “Who do we say Jesus is?”
I believe Jesus is the Son of the living God, the God of love and compassion and justice. I believe Jesus “came to live among us, full of grace and truth”[3] because Jesus is God’s way of showing us how much God loves us and all people.  Jesus reveals to us a living and loving God who cries for Heather Heyer and for the victims of Barcelona and Cambrills in Spain, a God who cares for those in the path of the storm in the Gulf and for those who are the victims of violence or racial or ethnic profiling.
I believe Jesus also came to show us what’s possible. Rather than giving in to disease, Jesus healed people. Rather than abandon people to their demons, Jesus showed compassion. Rather than let people go hungry because there’s not enough to go around, Jesus fed people. Jesus refused to be limited by the status quo and invites us to do the same. In the resurrection, Jesus shows us that goodness is stronger than evil and love is stronger than hate or fear or even death. In his life and in his teachings, Jesus shows us that God’s love wins.

There is so much going on in the world right now, in our nation and in our communities, that needs our prayers, our efforts, our work, and commitment. The living God calls us in our individual lives and in our life as the church to confess Christ-- the suffering Christ who always sides with the vulnerable, in word and deed.  With our lives, with our relationships, our bank accounts, our time, our energy, we are called to proclaim who we say Jesus is. In light of Jesus’ actions and teachings, how will our lives be different?

The Rev. Jill Duffield is the Editor of The Presbyterian Outlook and lives in the Charlottesville, Virginia area. She was actively involved with the interfaith group who witnessed to their faith and against hate and white supremacy a few weeks ago.
In Jill’s posts, she talks about the chants that echoed through the campus of the University of Virginia during the “Unite the Right” rally. “They will not replace us.” “Jew will not replace us.” As Jill writes, white supremacists don’t see neighbors to love-- they see competitors to be feared.

Jill writes that, at one point on Saturday, August 12, she found herself standing beside a young, African-American woman from “over the mountain,” about 40 miles west of Charlottesville. She’s an Episcopal priest who’d heard and heeded the call to come and support area faith leaders.
As they talked, they could hear chants coming from the park where the Unite the Right rally was to be held at noon. The crowd grew louder and angrier, audible even above the din of the helicopters hovering overhead. The chant that wafted into the Methodist church parking lot was filled with expletives and invectives.
Jill said her new friend shook her head and looked down. Then she looked up and said something Jill didn’t expect: “There are a lot of hurting people over there.”  The she added: “There is no joy over in that park. They are hurting.”
Jill writes, “Her grace caught me off guard and I think my expression revealed my surprise, because she continued: “We have to remember that they are hurting, because we need to be the church for them, too. If we forget that, we’ve lost everything that really matters.”
Jill says, “In that moment, I felt that all my faith fit into a thimble, while hers overflowed into the menacing streets outside our protected parking lot.  She was rock solid in who Jesus is and therefore who we are called to be, and no earthly power – no matter how ruthlessly oppressive – was going to make her forget it.”[4]

When we know how much God loves us-- how beloved and irreplaceable we are to God, we don’t need to be afraid of being replaced by others, and we can know the peace that passes understanding.  The unshakeable foundation upon which Christ builds the church is this love.

Jesus gives the keys of the kingdom of heaven to Peter and to the whole church,[5]  as a symbol of the authority of the church on earth.  What the church does--  the decisions we make, the grace we show, the truths we teach--  these all matter to God.
When the church reaches out to share the good news of God’s love to someone who is alienated from God, when we teach the faith to a child, when we care for someone in need, when we offer hospitality to a stranger, when we stand in solidarity with those who are marginalized or oppressed or stand up for justice--  we are living into God’s future—the kingdom of heaven—here and now.  When we do that-- we are participating in the very life of God.
Thanks be to God!  Amen!


Posted by RevFranMusings at 12:58 PM