"Martha's Story": A Sermon from Littlefield Presbyterian Church on John 11 on the 5th Sunday in Lent. 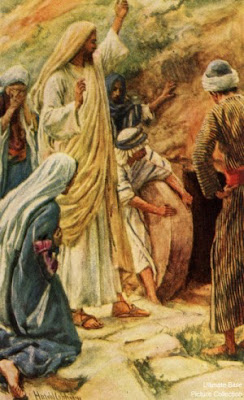 My name is Martha.  My sister Mary and I live in the village of Bethany, which is about two miles from Jerusalem.  Our brother Lazarus lives here too.  Lazarus-- oh, there’s so much to tell.  I’m trying to sort things out… trying to comprehend all that has been happening.  It’s a long story. Where to begin?
As you may know, one of our dearest friends is Jesus, an itinerant preacher and teacher from Nazareth. Whenever he is in the area, we are honored to welcome him into our home, to give him and his close disciples a place to rest and have a good meal.

Some months ago, Jesus had been going around in Galilee.  He was purposely staying away from Judea, because some of our religious authorities had been plotting against him--looking for an opportunity to kill him.  When it was almost time for the festival of Booths, Jesus went secretly to Jerusalem.
Some of our religious leaders were looking for Jesus at the festival and asking people where he was. I heard that there was a lot of whispering going on in the crowds about him, and there was controversy about who Jesus is   and about his teachings.
On the Sabbath, Jesus healed a man who had been born blind, by putting mud on the man’s eyes.  When the man washed the mud out of his eyes, he could see!
Our religious leaders were divided because of the things Jesus was doing and teaching.

Later, during winter, at the time of the festival of the Dedication, Jesus was walking in the temple. Some religious leaders gathered around him and demanded he tell them plainly: “Are you the Messiah-- or not?
They didn’t like his answer. They picked up stones, preparing to stone him. They accused him of blasphemy, saying that he was claiming to be God. They tried again to arrest him, but he escaped.
Jesus went across the Jordan to the place where John had been baptizing people earlier, and he stayed there.  We heard that many of the people who were there believed in him.
Jesus had been across the Jordan for a time when my brother became very ill.  We were very worried, so we sent a message to Jesus, saying, “Lord, he whom you love is ill.”
If you’ve ever had a loved one who was gravely ill, you can understand our fear and desperation when we saw Lazarus getting worse.  We had faith in Jesus’ power to heal, and we hoped that he would come back and heal Lazarus,
But he didn’t come.  And then Lazarus died.  Our friends and neighbors gathered to mourn with us. We prepared his body for burial, and we placed him in the tomb.
Our hearts ached with grief-- the grief of losing Lazarus and also the grief that our beloved friend didn’t come.  Jesus stayed across the Jordan two days after he got our message about Lazarus being ill.  Two days!
Later, a disciple told us that Jesus waited in order to glorify God.  I don’t understand that.
When Jesus told the disciples that he was ready to come to Bethany, they didn’t want him to come because of the danger.  But by that time Jesus was determined.

By the time Jesus got here, Lazarus had died!   The mourners had been with us, and he had already been in the tomb four days.
When I heard that Jesus was coming, I went and met him, while Mary stayed at home with our guests.  I let him know how full of grief and anger and disappointment I was.  I said to him, “Lord, if you had been here, my brother would not have died.  But even now I know that God will give you whatever you ask.”
Jesus said, “Your brother will rise again.”
I answered, “Yes, Jesus. I know that he will rise again in the resurrection on the last day.”
But then Jesus said, “I am the resurrection and the life. Those who believe in me, even though they die, will live, and everyone who lives and believes in me will never die. Do you believe this?”
I began to understand that Jesus meant something more, something more immediate-- not just an end-times promise, but something that makes a difference here and now.[1]
I said to Jesus, “Yes, Lord, I believe that you are the Messiah, the Son of God, the one coming into the world.”

Then I went back and called Mary.  I took her aside and told her that the Teacher had arrived and was asking for her. She went to him quickly.  The mourners followed her, because they thought she was going to the tomb, to weep there.  When Mary got to where Jesus was, she knelt at his feet and said, as I had, “Lord, if you had been here, my brother would not have died.”
Jesus was deeply moved when he saw Mary and the others weeping.  He asked, “Where have you laid him?”  They said, “Lord, come and see.”
Jesus began to weep, and some people said, “See how Jesus loved him!”  But some of them said, “He opened the eyes of a blind man. Couldn’t he have kept this man from dying?”

When Jesus came to the tomb, he said, “Take away the stone.”
We weren’t expecting that.  Lazarus was dead.  I have to say that I had given up hope by this time.  Our Jewish faith teaches us that the soul leaves a person’s body on the third day after death.[2]
I said, “Lord, he has been dead in the tomb for four days.  Already there is a stench!”
But Jesus asked me, “Did I not tell you that if you believed, you would see the glory of God?”
So, they rolled away the stone. Jesus said a prayer. Then he cried out with a loud voice: “Lazarus, come out!”
What a sight that was!  Lazarus came stumbling out of the tomb, with his hands and feet wrapped with strips of linen, and his face wrapped in a cloth.
Then Jesus said to us, “Take off the grave clothes.  Unbind him, and let him go.”
Many of the people who were with us that day believed in Jesus. But the chief priests and the Pharisees were afraid that if he kept getting more followers, the Romans would come and destroy our temple and our nation.  They called a meeting of the council, and they decided that Jesus must be put to death.
Because of this, Jesus could no longer walk about freely, and he and his close disciples went to the town of Ephraim, near the wilderness.  That’s where he was until he came to Bethany.
Of course, we prepared a dinner for him that night.  I was serving, as usual, and Lazarus was seated at the table with Jesus and the guests.
What Mary did next I can’t really explain.  She brought out a clay jar of pure nard, which is a very costly perfume.  She loosened her hair in a room full of men, which is something we never do.  She anointed Jesus’ feet, and wiped them with her hair. The house was filled with the fragrance of the perfume.

Would I have done what Mary did?  I don’t think so.  I tend to be the sensible, practical sister.  I’m not as demonstrative as Mary.  She’s more spontaneous and free…and very intense.
Yet in her way Mary acted out the great love and gratitude we have for Jesus for everything he is and does--and especially for restoring our brother to life.  When she dropped to her knees and poured the ointment on Jesus’ feet, she was anointing him for his burial.
It was an extravagant act of love.  I think she was doing something more than any of us can fully understand.
Mary’s perfume covered the stench of death on Lazarus, and it still lingers in our house… and in Mary’s hair.

Passover is near, and Jesus has told us that his “hour” is near.
I keep thinking about everything that has happened these past days.  There’s so much I don’t understand.  When Jesus called Lazarus out of the tomb when he had been dead and buried-- what does this sign mean?   When Lazarus came out of the tomb, with the grave cloths on, what did Jesus mean when he told us all to “unbind him and let him go”?
What does it mean-- what Jesus said: “I am the resurrection and the life?”   I have so many questions.
Our religious leaders are plotting to arrest and kill Jesus.   I’ve heard that they’re also plotting to kill my brother, because people see him as proof that Jesus is the Messiah.
Passover is coming soon.  I feel like something very important and life-changing is about to happen.  There is a sense of expectation in the city.  People are so excited since they learned Jesus is here for the Passover.
It is hard for me to feel faithful or hopeful right now.  Yet I know that I have been changed by what I have seen and heard.  So--for now--I will cling to Jesus’ promise, even though I don’t understand it completely: “I am the resurrection and the life. Those who believe in me, even though they die, will live, and everyone who lives and believes in me will never die.”
Thanks be to God!

Posted by RevFranMusings at 11:28 AM