"She Has Shown Great Love." A sermon from Littlefield Presbyterian Church on Luke 7:36 - 8:3 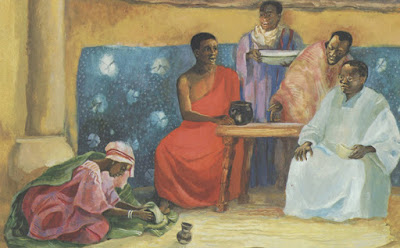 "She Has Shown Great Love"

In the 2003 movie “Luther,” an early scene portrays Martin Luther wrestling with the character and intentions of God.  Luther asks his mentor, an elder monk, “Have you ever dared to think that God is not just?... He [sic] has us born tainted by sin, then He’s angry with us all our lives for our faults, this righteous Judge who damns us, threatening us with the fires of hell!”
“Martin, what is it you seek?” the old monk asks.
“A merciful God! A God whom I can love.  A God who loves me.”[1]
Luke’s story brings Martin Luther’s concerns—and ours-- to the center:  What is the nature of God’s righteousness?  How are we saved from sin and reconciled to God?  Who is Jesus?
Once again, Jesus is in conflict with a religious leader.  A Pharisee named Simon has invited Jesus to dinner, and Jesus is there at the table.  A woman of the city crashes the party.  What causes tension in the story is that she’s a woman… and a sinner, and that she approaches Jesus while he’s at table eating.
We don’t know her name.  We aren’t told the nature of the woman’s sins. Tradition has remembered this woman as a prostitute, but Luke doesn’t say that.  We just don’t know.
The way Luke tells the story, Simon the Pharisee doesn’t get it.  He’s hypocritical and self-righteous.  He invites Jesus to dinner, but he’s quick to turn against Jesus.
When Simon sees what the woman does, he mutters to himself, “If this man were a prophet, he would have known who and what kind of woman this is who is touching him and that she is a sinner.”
Jesus speaks up and says, “Simon, I have something to say to you.”  And then he tells the parable about a creditor and two debtors, and asks him who will love the creditor who forgives the debts more--  the one who owed fifty denarii or the one who owed five hundred denarii.  “I suppose the one for whom he canceled the greater debt,”  Simon says.  Jesus says, “You have judged rightly.”

Then Jesus says to Simon, “Do you see this woman?  I entered your house.  You gave me no water for my feet, but she has bathed my feet with her tears and dried them with her hair.  You gave me no kiss, but from the time I came in she has not stopped kissing my feet.  You did not anoint my head with oil, but she has anointed my feet with ointment.  Therefore, I tell you, her sins, which were many, have been forgiven.  Hence she has shown great love.  But the one to whom little is forgiven, loves little.”
Then Jesus turns to the woman and says to her, “Your sins are forgiven.”
What contrasts Luke shows us in this story!  Here are two religious leaders suddenly in the presence of a sinful woman.  Simon the Pharisee has an understanding of righteousness that causes him to distance himself from her.
The root meaning of the word “Pharisee” is uncertain, but scholars tend to think it probably comes a word that means, “those who are separated.”  In their attempt to stay pure and acceptable, they have separated themselves from the rest of humanity.  The Pharisees were trying to keep all the thousands of laws that were developed to fill in the gaps between the Ten Commandments.
In contrast, Jesus came proclaiming the good news of God’s gracious love and forgiveness, and teaching that the greatest commandment is the commandment to love God completely and to love other people.
Simon is guarded and stingy with his love.  He is quick to judge Jesus and wants to rebuke him when he doesn’t meet his preconceived expectations.  In the end, Simon is rebuked, while the woman--a sinner—was the perfect hostess and is forgiven her sins.
Simon likes to think of himself as righteous, blameless, so he responds to Jesus as one who has been forgiven little.   He “knew” the woman was a sinner, and he assumes that she has defiled Jesus by touching him.
In Simon’s economy, righteousness is about calculating worth or worthiness.  But when Jesus came to live among us, full of grace and truth, he revealed what Jill Duffield calls “the messy, glorious gift-economy of God’s love.”[2]
As Jill points out, Jesus knows that many of us operate out of a more “capitalistic mindset” and “don’t get it,” so he tells “a dollars and sense parable.”  So which one of the debtors is more grateful?  The one who was forgiven of the greater debt.
A few weeks ago I shared a post on Facebook by Mark Wingfield, who’s a Southern  Baptist minister from Texas.[3]   This post on what he is learning about transgender people went viral and was read by more than a million people.  He recently wrote a follow-up blog that details the response he got to his first post.
Rev. Wingfield writes, “In two weeks’ time, I have exchanged personal correspondence with more than 400 people and have heard the personal stories of people from all over the country.”  He heard from transgender persons, from the parents and friends of transgender persons, from clergy, doctors, teachers, counselors and lots of average people.
He writes, “One transgender woman wrote to tell me her story and signed off with these words: ‘Sincerely, a woman who hopes that God still loves her.’”
One of the most heartbreaking messages Rev. Wingfield received was from a single mom with four kids, including one who is transgender.  This entire family recently was kicked out of their church, and the mother was asking for help in finding another church in her city where they would be accepted.
Another person wrote that, as a youth, he had been a deeply devoted Bible study leader in his church, but was asked not to attend that church anymore after coming out with a non-conforming gender struggle.[4]
Sadly, the church of Jesus Christ is most known today for what we’re against, rather than who God is for.

“Simon, do you see this woman?”   When Jesus speaks to Simon, it’s as if he says, “If you weren’t so obsessed with your own righteousness and purity, you could be celebrating God’s love and forgiveness as she is.
Do we see this woman?  The way she throws off cultural expectations and the norms of religious purity rules, the way she gives fully of herself, in an act of love and gratitude and fearless intimacy?
Mark Wingfield says when he wrote his original post about what he’s been learning about transgender persons, he wanted to get beyond headlines.  He wanted to go deeper than bathroom wars.  He observes that parts of the corporate world are trying to learn and trying to do the right thing for their employees.  One of the key phrases being used is, “Bring your whole self to work.”  There’s even a TED Talk on it on Youtube.  The idea is that employees perform better if they can be themselves at work and don’t have to live in fear.  As Wingfield asks, why is corporate America ahead of the church on this?
Why, indeed?   What do you think?

I agree with those who think that saying, “Bring your whole self to church” would require us to be honest—and not only about gender identity and sexual orientation.  In traditional church culture, we’ve been conditioned to be polite and nice.  We might think it’s dangerous to be our true selves at church—especially if we don’t feel like we fit the image of a perfect Christian.
For many people, it feels safe to talk about happy things.  But what if we or our children have deviated from the norm?  What if we’ve been unsuccessful, in the world’s eyes?  What if we’ve had struggles with financial insecurity or food insecurity… with depression or anxiety or substance abuse or mental illness… with loneliness… or a failed marriage?

“Your sins are forgiven.  Your faith has saved you.  Go in peace.”
“God so loves the world….”    The world.  That includes all of God’s children.
Too often we miss hearing that the good news is for us.  Some, like Simon, aren’t receptive--  so we miss encountering God’s gracious love and forgiveness in a new way.
Do you see her?  Jesus asks.  Do you see the way she welcomes me into her heart and life?  Do you see the love, the adoration, the gratitude in her response?
Luke tells us that soon after that dinner party, Jesus went through cities and villages, proclaiming and bring the good news of the kingdom of God.  The twelve were with him, as well as some women who had been cured of evil spirits and infirmities and who provided for them out of their resources.
The good news is that Jesus reaches out to people who know they’re sinners and to Pharisees and good church people.  Jesus reaches out to you and to me in love, offering a new, abundant life.
God loves you, whoever you are.
So… what are we going to do with all this love?


[1] I’m grateful to Gregory Anderson Love for reminding me of this scene in the movie in his “Theological Perspective” in Feasting on the Word: Year C, Volume 3 (Pentecost and Season after Pentecost). Westminster John Knox Press, 2010,  Kindle Location 509

[4] I really appreciate Mark Wingfield’s blog posts and am very indebted in today’s sermon to them.  Mark Wingfield, “Painful lessons from a pastor’s viral transgender post,” May 31, 2016, at https://baptistnews.com/article/painful-lessons-from-a-pastors-viral-transgender-post/

Posted by RevFranMusings at 2:01 PM