"Our Next Pentecost". A Sermon for Pentecost Sunday, from Littlefield Presbyterian Church. Acts 2:1-21. 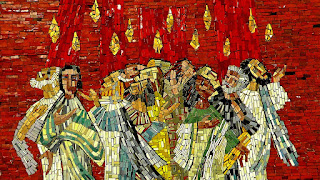 Today is Pentecost Sunday, when we celebrate the coming of the Holy Spirit by fire, wind, and word.  Pentecost — from the Greek pentekostos, meaning "fiftieth," was a Jewish festival celebrating the spring harvest, and the revelation of the law at Mount Sinai.
In the second chapter of Acts, Luke tells us that 120 disciples are gathered together in Jerusalem, on the day of Pentecost--  50 days after Jesus was raised from the grave.  They’re waiting and hoping for the fulfillment of Jesus’ promise:  “You will receive power when the Holy Spirit has come upon you.  And you will be my witnesses in Jerusalem, in all Judea and Samaria, and to the ends of the earth.
By any stretch of the imagination, it's an amazing story, full of riveting details.  Tongues of fire.  Rushing winds.  Accusations of drunkenness.

So… What was it that happened on that first Day of Pentecost?  Although this holy day is often called the birthday of the church, we’re not celebrating the birth of an organization today.  Pentecost is the story of how the church came alive by the power of the Holy Spirit.   On that day, followers of Jesus Christ received the power to take the gospel to the streets there in Jerusalem...  and eventually throughout the earth.
What happened that day was such a powerful experience that the people who were there had to turn to dramatic metaphor to describe what happened.  They said it was like a fire falling on them.   A sense of community and understanding transcended the differences of language of those who were gathered there.

On that day a mighty wind from heaven blew the fire of the Holy Spirit onto those followers who were gathered together.  When things like tongues of fire danced over the heads of the apostles, they seemed to be quickened by unseen forces.  They were shouting...  preaching...  speaking in a variety of languages...  and generally making such a commotion that the people of the city had to stop and wonder what on earth was going on.
The Spirit blew into the apostles an awareness that--  just as Jesus had promised--  the presence of the Holy Spirit was with them… and was at work in and through them.
The sound that came from heaven--  that rushing violent wind--  was the exciting sound of old barriers being broken and glass ceilings shattering.  The divisions within humanity were being overcome.   The church was empowered to take to the streets with the good news.
On the day of Pentecost, the disciples acquired a holy boldness that they’d never had before.  The difference in them after Pentecost was as dramatic as those before-and-after pictures that weight loss programs use in their advertisements.
Before Pentecost, on the night of Jesus’ arrest, Peter cowered away from a servant girl’s questions and refused to admit that he even knew Jesus.  After Pentecost, Peter preaches the first Pentecost sermon to the confused and questioning crowd.  The Spirit gives him the power to witness to the crowd.
Before Pentecost, many of the disciples felt doubt and despair.  They may have felt, like their ancestors had, like “dry bones.”   After Pentecost, the apostles went out into the streets and into the community...  and people’s lives were changed.  They touched the lame and they walked.  They were imprisoned and flogged...  yet they showed no signs of doubt or fear.  The once disheartened disciples moved out--  prodded and enabled by the Holy Spirit,  which accomplished in them what the human spirit could not.
Who will be in this new community of faith?  Jews, of course.  That's what the first disciples believed.  After all, Pentecost, was a Jewish festival.  The promises of God were clearly promises just for Israel.
But, not long after the story of Pentecost in Acts 2, there are other stories.  Peter has a vision in which he sees a great sheet being lowered with all kinds of animals.   He heard God's voice saying,  “Don’t call anything I create unclean.”
Peter came to understand that the vision wasn’t about unclean food, but about unclean people.  He met the gentile Cornelius and baptized him.  The church could have become a sect within Judaism--  a gathering place for disgruntled Israelites.  But no--  the promise of God was sent even to the Gentiles--  to the outsiders.  The early church struggled with the issue of who to include, just as we do today.  But the Holy Spirit prevailed.
Fifteen hundred years later, the church that began at Pentecost languished.  There was widespread corruption and abuse of
power by the church.  Would the movement begun at Pentecost go the way of so many other organizations that mature and then die?
An Augustinian monk in Germany, Martin Luther, nailed 95 theses on a church door and called the church back to its biblical roots.  You know the rest of the story of the Reformation:   the Holy Spirit prevailed.
Eighteenth-century England was going through the trauma of urbanization and the first industrial revolution.  Alcoholism was a plague upon the land.  Poverty degraded the lives of millions.  The church seemed far removed from these tragedies--  remote, privileged, and cold.  A priest in the Church of England named John Wesley felt his heart “strangely warmed.”  He began a dramatic revival that swept through England and transformed the hearts and minds of millions.                   What was it that strangely warmed Wesley’s heart and revived the church in that time?  It was the Holy Spirit.  The Spirit prevailed.
The New Testament tells us that women were once key leaders of the church.  But they’d been pushed aside as the church fell back into the patterns and mores of the surrounding culture.  There were notable exceptions over the centuries.   But mostly the gifts of women for leadership in ministry were ignored or repudiated.
Finally, in our own time, the gifts of women began to be affirmed once again.  Around the middle of the twentieth century, the church struggled through a controversy which I’ve been told was as intense as the issues that divided our denomination in more recent times.   Eventually, that controversy was partially resolved when our mainline Protestant churches began ordaining women.

Today we are living in a time of huge change… and cosmic shift:  technological, cultural, political, and religious.   According to Harvey Cox, we are now experiencing the biggest shift in Christianity since the 4th century.  The research tells us we’re living in an increasingly pluralistic society, populated by members of a variety of religious groups and those we know as the “nones”—no religious affiliation—as well as the “dones” and the “spiritual but not religious.”   So it’s no wonder if we feel bewildered… disoriented… and afraid.
But I think we’re in a time when God is trying to do amazing new things.  The Spirit is on the move!
Harvey Cox has been saying that we’re living in the “age of the Spirit,” which began around 1900.    Whatever we call it, it’s a time when we need to open ourselves to the work of the Holy Spirit to guide and empower us.
The Spirit empowered the first believers to testify to God's great deeds, emboldened the apostle Peter to preach to a bewildered crowd of Jewish skeptics, and drew three thousand converts in one day.
The feast of Pentecost reminds us that the Holy Spirit still blows into our lives and messes with a lot of the things we’ve been comfortable with.

"All of them were filled with the Holy Spirit and began to speak in other languages, as the Spirit gave them ability."  "At this sound the crowd gathered and was bewildered, because each one heard them speaking in the native language of each."
I believe the Pentecost story is a story for our time.  As Debie Thomas writes:  “We live in a world where words have become toxic, where the languages of our cherished "isms" threaten to divide and destroy us.  The troubles of our day are global, civilizational, catastrophic.  If we don't learn the art of speaking across the borders that separate us, we will burn ourselves down to ash.
“For those of us living in America this election year, the temptation to retreat into our political enclaves is especially strong.  Why bother to understand — much less to speak — the languages of those whom we disagree with?  Why not sneer?  Isn't sneering easier?  Isn't it more fun?
“Maybe,” Rev. Thomas says.  “But it is no small thing that the Holy Spirit loosened tongues to break down barriers on the birthday of the Church.  In the face of difference, God compelled his people to engage.  From Day One, the call was to press in, linger, listen, and speak.
I agree with my colleague when she says, “Because here's the thing: no matter how passionately I disagree with your opinions and beliefs, I cannot disagree with your experience. Once I have learned to hear and speak your story in the words that matter most to you, then I have stakes I never had before.  I can no longer flourish at your expense.  I can no longer make you my Other.  I can no longer abandon you.[1]
By the time Luke told the story of Pentecost, he already knew that the Christian faith had spread to the edge of the known world and to its very center in Rome.  The Jesus movement had already transcended tribe and tradition.  Jesus inspired a religion of the poor and the powerless without an enemy or enmity, a religion that included everybody.
As another colleague puts it, “the story of Pentecost shows the Spirit of God out of the box, prancing about in the town square and intoxicating the people with the sheer beauty of her audacity.”[2]
Luke’s Pentecost story contradicts the tribalism exemplified in the story of the Tower of Babel.   The story of Pentecost that declares that in Christ there is no longer different tribes, because all are one as Christ is One.  In Christ, there is no East nor West, no South nor North, no Jew nor Gentile, no man nor woman.
Today, in the 21st century, I believe we are called to find ways to build bridges with our sisters and brothers who are Jewish, Muslim, Hindu, Buddhist, Sikh, atheists, agnostics, as well as those who are poor, powerless, or marginalized.
We Presbyterians tend to be comfortable with doing things “decently and in order,”  but I hope that we will be open to the leading of the Spirit, even when that means moving out of our comfort zone and into new and unfamiliar relationships and endeavors.
Imagine a 21st century Pentecost where we begin to listen to those who we’ve failed to understand before, where we experience together the miracle of understanding.
Imagine a 21st century Pentecost where Christians, Muslims, Jews, and those who follow other religious or spiritual paths find ways to listen to one another and find ways to work together for a better world.

The Holy Spirit that gave birth to the church continues to prod, cajole, and urge us forward.    It’s been this way since the beginning of the church.  Just when we get settled down, comfortable with present arrangements, our pews bolted securely to the floor, all fixed and immobile,  there comes a rush of wind or a still small voice… a breath of fresh air… tongues of fire--  and the Holy Spirit comes to us, crashing our parties and inviting in the people we were hoping to avoid, and then bringing us all together, forming and molding us into one Body of Christ.
May it be so!
Amen!