"An Audacious Promise": A sermon from Littlefield Presbyterian Church on Luke 3:1-6 on the Second Sunday of Advent. 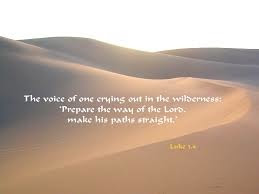 We’ll be hearing a lot from the Gospel according to Luke in the coming year.   This week’s reading tells about the beginning of the ministry of John the Baptist.   Luke first identifies John by placing him in historical context, much like how the Old Testament prophets were introduced.
The word of God came to John, the son of Zechariah the priest, in the wilderness.  But Luke lets us know that it happens in the wilderness of the political world:  during the reigns of Emperor Tiberius, when Pontius Pilate was governor of Judea, and Herod was ruler of Galilee.   The major focus for Luke is salvation, but it’s important for Luke, that we understand the political reality of the day-- to understand the world into which God is bringing salvation.
But Luke doesn’t stop there.  He goes on to the “spiritual” or “religious” power structure as well, by naming the high priests Annas and Caiaphas.  Now the high priesthood was subject to annual re-appointment by the Roman authority, so Luke may be listing them as another part of the political hierarchy.
In any case, this is the messy reality of the world, in the fifteenth year of the reign of Emperor Tiberius.  The word of God came to John in the wilderness, and spoke through John to a wounded world.
God chooses a nobody—John.   John became an itinerant preacher, and he went into all the region around the Jordan River, proclaiming a baptism of repentance for the forgiveness of sins, “as it is written in the book of the words of the prophet Isaiah.:
“The voice of one crying out in the wilderness:
‘Prepare the way of the Lord,
make his paths straight.
Every valley shall be filled,
And every mountain and hill shall be made low,
And the crooked shall be made straight,
And the rough ways made smooth;
And all flesh shall see the salvation of God.’”[1]

Email ThisBlogThis!Share to TwitterShare to FacebookShare to Pinterest
Labels: Incarnation, John the Baptist, Luke 3:1-6, mass shooting, massacre, peace, prepare the way of the Lord, repent, salvation, the voice of one crying out in the wilderness, violence