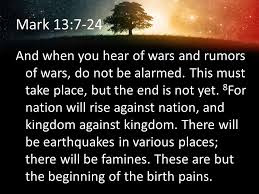 Just a few days ago, I was wondering what I would do with this passage on a Sunday when we consecrate our stewardship commitments and take some time for faithful imagination about the future of the church.  Then we studied it at the beginning of Evangelism committee meeting, and I started to see some possibilities.
Then it happened-- again.   Just this week:  Terrorist attacks in Beirut.  Baghdad.  Paris.
The thirteenth chapter of Mark has traditionally been called “the little apocalypse.”  This passage, along with the other apocalyptic writings in the Bible, has been what Lamar Williamson calls “a happy hunting ground for persons fascinated by the end of the world.   It figures prominently in books by doomsayers and in sermons by evangelists more interested in the next world than in this one.”[1]
“Apocalypse” can mean the uncovering or revealing of things that are to come:  like the wars and earthquakes and desolation of Mark 13.  But perhaps in a deeper sense it’s about how the vision of devastation transforms our vision of the things that are.  What is revealed is the true nature of the reality in which we live: its transitory, provisional character.   And so, it can be a kind of reality check.

Posted by RevFranMusings at 5:46 PM