"Holy Healing". A sermon from Littlefield Presbyterian Church on Mark 7:24-37 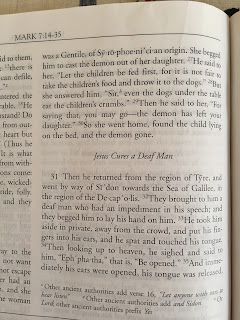 Jesus is exhausted and he tries to have some time to himself.   But then a desperate mother comes to Jesus, seeking healing for her sick daughter, literally throwing herself down at Jesus’ feet.  She risks her dignity…and risks being shamed—to enter a home where she isn’t wanted, to throw herself down in front of Jesus, who didn’t want to see her.
And how does Jesus respond?  Not in the way we might have hoped.  This woman is literally begging for help for her daughter, and Jesus says, “Let the children be fed first, for it isn’t fair to take the children’s food and throw it to the dogs.”
If Jesus' words trouble you, you're in good company.  Biblical scholars have struggled with this saying for centuries, but especially, I think, the past few decades.
In the parallel story in Matthew, Jesus doesn't even answer the woman.   When the disciples urge Jesus to send her away, Jesus says, "I was sent only to the lost sheep of the house of Israel."
`           It sounds like Jesus is dismissing and insulting this woman.  Mark uses the diminuitive form of the Greek word for “dog,” so we might want to soften the effect and think Jesus was talking about feeding cute little puppies.  But that wouldn’t really be an accurate translation. This story is troubling for a number of reasons.
It seems that Mark wants to be sure we know who this woman is.  He tells us, “the woman was a Greek, a Syrophoenician by descent.”  In other words, she’s NOT JEWISH.
Contrast how Jesus responds to this un-named Gentile woman with the named male, Jewish leader earlier in Mark.  Jesus went with Jairus and healed his daughter.  No problem.
But now Jesus is in Tyre, which is Gentile territory, when he says “Let the children be fed first, for it is not fair to take the children’s food and throw it to the dogs.”

I think Mark wants to make sure what a big deal it is when Jesus ultimately performs the miraculous healing.
So what do we do with this story?
Some scholars believe that Jesus had a long-range evangelistic plan to go to the Jews first...  and then later to the Gentiles.  In their thinking,  Jesus isn't so much saying no--    as he is saying, "First things first.  One thing at a time."
But the language Jesus used!    "Dogs?"   From what I've read, it's a racist, derogatory term commonly used at the time by some Jews who wanted to put down gentiles.  A lot of people in that culture in Jesus' time thought this Gentile woman has no business being in the company of any Jew--  much less the Messiah.
But Jesus has been challenging a lot of the traditional religious beliefs and breaking through a lot of the barriers that separated people.
Some scholars believe Jesus was giving voice to the traditional beliefs of the time as a test of the woman's faith.  Some believe he was voicing those narrow beliefs to let her make the point that needed to be made.
Other scholars believe that this desperate, emboldened woman changed Jesus' mind about his mission and who he was called to save.
I lean toward that understanding myself, as I remember the context.   In Mark’s narrative, this story is sandwiched in between the feeding of the five thousand and the feeding of the four thousand.    Is the bread of life that Jesus offers intended only for the children of Israel?  Or is there enough for everyone?
I know there are people who are troubled by the idea that Jesus would change his mind… as well as people who are troubled by the language Jesus used in this story.  Maybe we have to keep chewing on this bread for now.  Like Jacob at the River Jabbok—we need to keep wrestling with it  until we receive a blessing.
In any case, this woman doesn't back down.  I love the way one of my colleagues puts it:  "Dog indeed!  She keeps right on nipping at Jesus' heels." [1]   The woman dares to take his metaphor and turn it back on him.  Even on these terms, there still should be something from him--  some scrap of grace--  for someone like her,  someone who comes to him in faith.   The woman seems to trust in the abundance Jesus keeps teaching about.  She seems to be challenging him to judge her by what's in her heart.
Where the religious establishment and their traditions could only see an outsider--  Jesus sees the woman's heart of faith,  and her persistence, and he heals her child.   From this point on, Jesus continues to expand the circle of God's mercy to include those others consider outsiders.  He welcomes all who put their faith in him.  So, when you look at the big-picture story, it looks like Jesus changes his mind and his plan.

That's good news for us.     We are all welcome.   We are all included in the circle of God’s mercy.   When Jesus opened himself up to mission to the whole world, it meant his church would be open to the world.  In response, as followers of Jesus, we are called to be open to those whom some people see as outsiders, outcasts, and sinners.  We are called to open ourselves to the whole world in mission.

I don’t want to ignore the other story we heard in today’s gospel lesson.  At first glance, they might not seem to have a lot to do with each other--  except that they’re both healing stories.  And I believe that is significant.
Healing is one of the major themes in the New Testament.  One of my colleagues counted all the healing stories and found that there are forty-one healing stories, told in seventy-two different versions in the four gospels.  These healing stories take up twenty percent of the gospel material.[2]  I agree with Susan Andrews when she says that these healing stories tell us something very important about the nature of God.  God continues to be the creator of our lives—shaping us, mending us, healing us into wholeness.
When people asked Jesus what the greatest commandment is, he said that the most important commandment is to love the Lord our God with all our heart, and all our soul, all our mind and all our strength… and to love our neighbor as ourselves.    As we grow into a more loving, trusting relationship with God, we become healthier in our hearts and souls and minds and strength.  All of those dimensions of who we are become more integrated…and we become more whole, as we grow into the life God desires for us.
In the gospel stories we’ve been hearing over a few weeks, we’ve heard Jesus challenging legalistic interpretions of God’s law and proclaiming that purity is not defined by law—but by the love in one's heart and the hospitality and compassion we live in our lives.
The story about the Syrophoenician woman is a turning point in the gospel, as Jesus redefines who is acceptable in God’s eyes.  The healing turns out to include stories about social healing:  …strangers are welcomed and outsiders become part of the family of God.
So what does all this mean for us today?
The Syrophoenician woman and the friends of the deaf and mute man refused to believe that God’s mercy and healing are limited to insiders and people like us.  They believed that Jesus could immediately meet their need.  They embodied a faith that trusts in God’s goodness and abundance—a faith that pushes past legalism and exclusivity.
When we allow our ears and our hearts to be open to the images of people leaving everything they have, everything they know, desperately seeking safety and freedom for their families—refugees seeking refuge—the Syrophoenician woman can teach us that, in God’s abundant economy, there is enough for everybody.  There is enough, if we reach out and share.
My friends, this is GOOD NEWS!  So, like the people in the gospel story, may we be astounded and say, “He has done everything well!
As followers of Jesus, may we embody God’s abundant compassion, so that people will look at us and be astounded with us and say, “They do everything well!
So be it!   Amen!