"Words of Life," a sermon on John 6:56-69, from Littlefield Presbyterian Church. 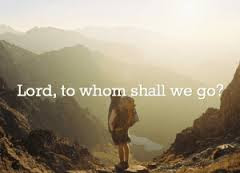 Today the scripture passages given to us by the lectionary have something that could offend most everyone.  First, there is Joshua, hero of a book of wars, in which God serves as military commander of Israel’s invincible army.  As Barbara Brown Taylor puts it, Joshua is cleaned up for today’s speech at Shechem-- but he waded through blood to get there.
Then there’s today’s gospel lesson, which is the last in a four-part series on the bread of heaven.  The sixth chapter of John is full of statements that were offensive to those who heard them.  First Jesus suggested that he was God's own manna, come down from heaven to give life to the world.   Last week Jesus took the offense to an even higher level by choosing really gory words.   He uses the word for "chomp" or "gnaw", so that a more literal translation of his invitation would go something like this:  "Those who chomp my flesh and guzzle my blood have eternal life; for my flesh is true food and my blood is true drink."[1]
This is not a nice image.  As someone suggests, it sounds more like something for a butcher shop than for a church.  Add to that the fact that Hebrew scripture clearly forbids the drinking of blood, and you can understand why Jesus' followers began to pull away from him at that point.  "This teaching is difficult,"  they said.  "Who can accept it?"
Any time we gather for Bible study, no matter what passage we study, if we take it seriously, eventually we might hear somebody ask, “Are we supposed to understand this literally or metaphorically?”   “If God did all that centuries ago—why is there such suffering in the world today?”  Or some other tough questions that keep coming up—some of them un-answerable.
Jesus doesn’t give his first disciples simple answers—or a copy of “The Gospel for Dummies in Three Easy Steps.”  No.  Instead we have a paradoxical gospel that we’ll need to struggle with for the rest of our lives!  This teaching is difficult!

If the disciples are going to follow Jesus all the way--  then they’re   going to have to give up their need to understand,  agree with, or approve of everything he said or did.   They’re going to have to believe him, even when he says something that offends them.  They’re going to have to trust him, even when what he does goes against everything they’ve been taught.  You can almost hear some of their minds slam shut.
Perhaps one of my colleagues, writing in The Christian Century a few years ago, has it right when he suggests that the real miracle in chapter six of John isn’t that Jesus fed thousands of people at the beginning—but that but that there were even a dozen disciples left by the end of the chapter.[2]

When Jesus sees the crowds deserting him, he asks the twelve if they want to go away too.
Jesus wants them to know that following him on the way is no picnic.  The people in the crowd have their reasons for turning back.   Change is scary.   They don't want to give up their desires, their comforts, their security.  They want to follow Jesus on their own terms, without changing their priorities, without being uncomfortable.  They want to be in control of their lives.  So when Jesus challenges them and calls them to pay the cost of true, obedient discipleship--  a lot of them  leave.
"Do you also wish to go away?"  Jesus asks.

This teaching is hard.   A lot of people aren’t looking to be challenged a lot in their faith.  So…at a time when many denominations and local congregations are seeking to grow or struggling to survive, doesn't it seem like a good idea to put out a message that will appeal to as many people as possible?  Wouldn't it be a matter of good business to find out what the customers want--and then give it to them?    The growing opposition to Jesus in this text seems to be the last word the church wants to hear today.
But there's no way around the hard word of this Sunday's gospel lesson.  Jesus’ message didn’t didn't appeal to everyone.  Some people didn’t understand it. And some turned away because they did understand.
The movement of the story in John 6 is telling:   one group after another turns away from Jesus.  At the beginning a huge crowd comes seeking Jesus… seeking what they hope he'll do for him.  In the beginning, the people who came because they want to be “fed” are happy with Jesus.  But later they become disillusioned by his words.  Some take offense at what he says.  Then, in today's text, Jesus' own disciples--  a larger group than "the twelve"--  become scandalized by his words and begin to desert him.
"Do you also wish to go away?"   Jesus asks.  Peter speaks for the little band of faithful disciples.  "Lord, to whom can we go?  You have the words of eternal life."

What do you hear in Peter's response?  Peter is just as offended as anyone else by a lot of what Jesus is saying.  He keeps the traditional dietary laws.  We find out later, in the book of Acts, that Peter never eats forbidden foods, which would include meat with blood still in it.  The idea of gnawing flesh and drinking blood turns his stomach as badly as it does anyone else's.  But where is he to go?  As confusing as Jesus is, Peter has glimpsed something in him that he can't turn away from.  In Jesus, he has glimpsed God.  So, if trusting that means struggling with a whole lot of distasteful things that go with it, then Peter will stay and struggle.  He won't turn away from the life he has been led to--  even if it's miles from the life he thought he wanted.

We live in a time when many people "shop" for the perfect church for themselves, a church they hope will meet their needs or satisfy their desires.   Peter’s words challenge a lot of us.
There are times when some folk may be tempted to say,  "If my church votes the wrong way on this issue, I'm outa here."  Or,  "I can't belong to a church that would fund a project like that."  I couldn’t be part of a church that welcomes those people.  I wouldn’t belong to a church that believes that.
We may hear people saying,  "I don't go to church any more.  I couldn't take any more of the hypocrisy...  sexism...   liberals...   conservatives...   old-timey hymns with exclusive language...     new, unfamiliar hymns...  lousy preaching...      You can fill in the blank....
There are a lot of imperfect churches around--  large and small.        I agree with the way one of my colleagues puts it:  When the main reason not to belong to a church is that I can't find a community of faith that agrees with me on everything from what kind of music we should sing to where we should stand on homosexuality or abortion or the death penalty, then I have the perfect excuse never to belong to a church with more than one member--   me.[3]
There is no perfect church...  --  if perfect means that I understand, agree, or approve of everything that goes on there.  If you become a Christian, you get a Bible that says God helped Joshua exterminate whole tribes of people right down to the last baby.  You get a household code in Ephesians that makes wives subject to their husbands and tells husbands to sacrifice themselves for their wives… and slaves to submit to their masters.   But you also get the twenty-third psalm and the parable of the prodigal son."
If you're a Presbyterian, you get a church that's been divided for decades over issues related to human sexuality, a church that was divided for decades over ordaining women to be pastors, elders and deacons…  a church that split over the issue of slavery and then took over a hundred years to get back together.  You get people who only want to sing the hymns they grew up singing… and some people who only want to sing contemporary music.  You get a church that’s been divided for decades over issues related to human sexuality, a church that through study and prayerful discernment has recently made some decisions that have thrilled a lot of people and disappointed and disturbed others.  You get a commitment to scholarly, faithful Bible study and theology and worship that once in awhile can fill you with awe and amazement when it helps us get a glimpse into the heart of God.
Jesus asked the twelve disciples, "Do you want to go away too?"
Simon Peter spoke for the whole group when he said, "Lord, where can we go?  You have the words of eternal life."
Peter’s words can be a declaration of faith for an ambiguous and troubled world like ours and for people like us.  People who don’t understand everything about Jesus.  People who have plenty of unanswered questions, but keep hanging in there with him anyway.
We know there are other options for pursuing spiritual enlightenment…  or we could choose not to pursue a spiritual path at all.  Yet some of us keep coming back to Jesus.  Maybe it’s because we’ve heard in his words something that rings true to us in deep ways.   Maybe it’s because whenever we’re in his presence we feel more alive.  Maybe it’s because when we’re joined with this imperfect group of people who are struggling to follow Jesus in the way of LOVE—we experience grace and joy.   Maybe it’s because we know we need to be part of the body of Christ to be encouraged and challenged to live into God’s kingdom of love and justice and peace and hope.
In my study this week, I came across a story told by a Presbyterian pastor who was serving a church in Philadelphia. In The Christian Century, Wallace Bubar tells about a newcomer who came to their church and went through a new member class—but was reluctant to join.  He read a lot and asked a lot of questions.  He wasn’t sure if he was a skeptic…a seeker…or an agnostic, but he was pretty sure he wasn’t a Presbyterian.  He asked the pastor a lot of questions about the creeds…other religions…the relationship between faith and science…and what it means to believe in Jesus.  He nodded politely when the pastor tried to formulate answers to each question, but the pastor could tell he wasn’t persuading him.
In the end, this newcomer said, “Thanks.  I appreciate your time, but I just I just don’t think this is for me.”  They shook hands and parted.
The next Sunday, the pastor noticed the man slip into a pew in the back of the church.  He stood and sang the hymns with everybody else, but he didn’t join in when they recited the creed.  But when it was time for communion, he came down the aisle.
The pastor said he was thinking he’d like to ask this man if he’d had some kind of epiphany since they’d last talked, but he didn’t.  Instead, he said, “The body of Christ, given for you” as he gave him the bread.
After the service, he greeted him and said, “I didn’t think we’d see you here again.”
The man shrugged—perhaps as Peter must have shrugged.
“Lord, where else can we go?”
Jesus Christ invites us to follow him in the way of love and life.  If we say "yes" to him, not just with our voices, but with our very lives, then we choose the path that leads to eternal life.
I pray that we choose life!
Amen!