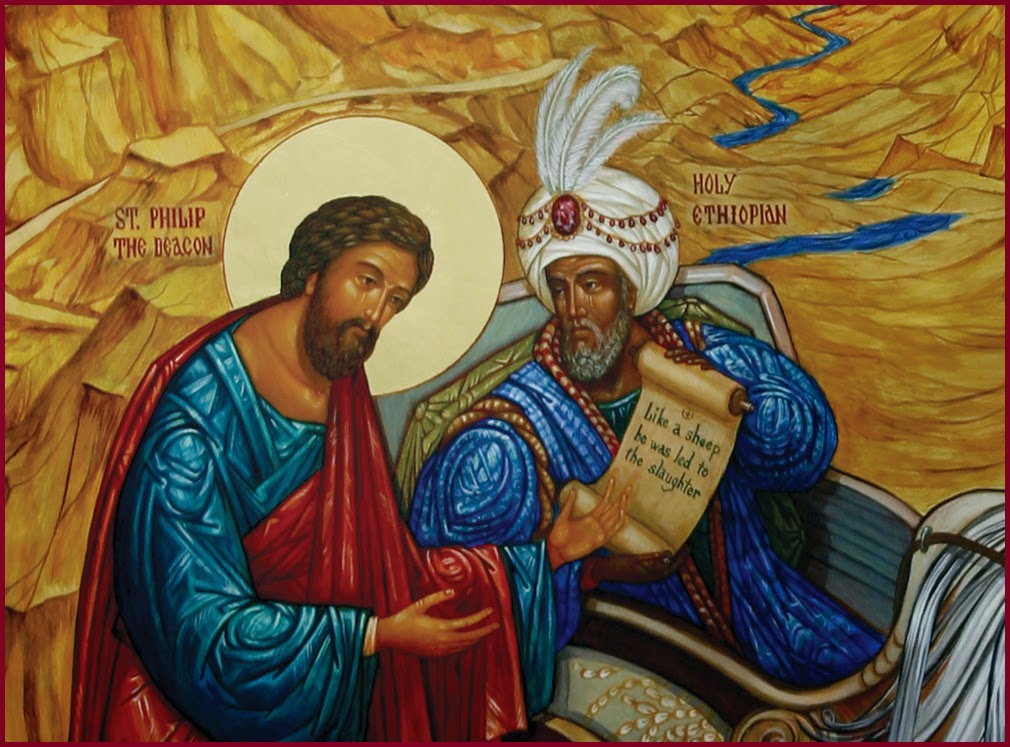 "What Is To Prevent?"
A sermon preached at Littlefield Presbyterian Church Sunday, May 3, on Acts 8:26-39.

But that isn’t what happened.  An angel of the Lord had sent Philip to encounter this Ethiopian eunuch.  This God-fearing eunuch who was studying the prophet Isaiah invites Philip to ride with him and lead him in Bible study.
I wonder if, during the course of their Bible study in the chariot, Philip and the eunuch read the next few chapters in the scroll of Isaiah.  I wonder if they got to chapter 56, where Isaiah proclaims:
“Thus says the LORD: maintain justice, and do what is right,
for soon my salvation will come,and my deliverance will be revealed….
Do not let the foreigner joined to the LORD say.
“The LORD will surely separate me from his people”;
... and do not let the eunuch say,
"I am just a dry tree."
For thus says the Lord:
To eunuchs who keep my sabbaths,
who choose the things that please me
and hold fast my covenant,
I will give in my house and within my walls,
a monument and a name
better than sons or daughters;
I will give them an everlasting name
that shall not be cut off. “[6]

Over the years, scholars have wondered how Isaiah could have said such a thing.  Surely he knew the holiness code as written in Deuteronomy.  A eunuch was excluded from the assembly of the LORD.[7]  Why would Isaiah have said this after the exile, when the survival of the remnant of the people of Israel was at stake?  This was a time when having children would have been a priority… and when purity and boundaries seemed critically important.  And yet, in just such a time, Isaiah wrote that foreigners and eunuchs would be welcome in the household of God.
Could it be that the Spirit of God was hovering over the text and over the prophet, bringing forth a different word to overturn the word of exclusion?
The Spirit of God has been on the move.  Surely it was no coincidence that the story in Acts 8 of an Ethiopian eunuch brings together the two categories of Isaiah 56 together in this one person.  Luke is steeped in the writings of Isaiah from the day in Nazareth when Jesus read from Isaiah’s scroll[8] to this day on the wilderness road.
The work the risen Jesus began on the Emmaus road, opening and interpreting the scriptures, Philip is continuing.
Through his storytelling and his actions, through his relationships with people, Jesus proclaimed the gospel of the kingdom of God—the gospel of love.
When people asked Jesus what the most important commandment was, Jesus said:  “Love God with your whole being.  Love your neighbor as yourself.  On this hang the whole of the Law.”
Jesus’ teaching and ministry were all about love and compassion and healing.  He reached out to people on the margins of society—people the good religious people of his day thought of as sinners and outcasts.
The eunuch listens to Philip as he shares the good news of Jesus.  And then with longing and excitement, he asks:  What is to prevent me from becoming part of this living, welcoming Body of Christ?
What does Philip do?   He sets aside the narrow confines of purity laws and exclusion… and throws open the wide doors of God’s love and mercy.  He embraces the spirit of the law, and baptizes the eunuch.
This is gospel in action.  That’s what happens when we really study the Bible.  It’s transformative. It changes our minds. It changes our lives. And, like the Ethiopian eunuch, we go on our way rejoicing.
That’s a very different thing from when people pick a verse or two or three to support what they already “know” and say, “No. God says no.”
He went on his way rejoicing!   Tradition tells us that the Ethiopian eunuch was the first one to take the gospel to Ethiopia, and that makes sense to me.  He went on his way rejoicing—so full of joy and gratitude that he would have wanted to share the good news.
The eunuch goes on his way rejoicing, for he has become a full member of the household of faith.  Then the Spirit sends Philip on to share the good news in new places.  The Spirit is on the move.
There is good news for us and for all God’s people today.  God continues to come to us and to work in the lives of women and men who abide in Christ.   By that same Spirit, God unites us to Christ in the waters of baptism.
God gives us grace to abide in Christ, so that we can rejoice and grow in grace and produce the fruit of God’s reign in our lives.   We are sent forth to share the amazing wideness of God’s love…  to make everyone feel welcome in the heart of God.
This is the Good News of the Gospel.  May it be so for you and for me.
Amen!


Posted by RevFranMusings at 7:43 PM