"Sharing in the Life of Christ." A Sermon from Littlefield Presbyterian Church. 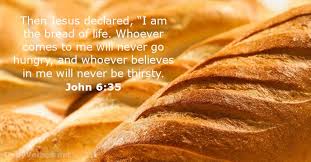 "Sharing in the Life of Christ"

We’ve been spending some time in the sixth chapter of John’s gospel.  A few weeks ago, we heard the story of how thousands were gathered to hear Jesus teach.  The people in the multitude were hungry, and the disciples told Jesus they needed to care for them. All they could come up with was a little boy with five loaves and two fish. It must have been an amazing sight as Jesus took that little bit of food, gave thanks, and everybody gathered there had enough to eat, with baskets of food left over. It was such an amazing thing that people wanted to make Jesus their king.
Jesus had provided for the people beyond belief. So, they went looking for him.  When they found them, Jesus told them that the bread of God is the bread that comes down from heaven and gives life to the world.”
The people said, “Give us this bread always.”
That’s when Jesus declared to them, “I am the bread of life. Whoever comes to me will never go hungry, and whoever believes in me will never be thirsty.
The people in the crowds who had made such efforts to find Jesus after he’d crossed the lake began to grumble about him because he said, “I am the bread that came down from heaven.”
They said, “Isn’t this Jesus, the son of Joseph, whose father and mother we know? How can he now say, ‘I came down from heaven’?”
Jesus answered them: “Stop grumbling among yourselves. No one can come to me unless the Father who sent me draws them, and I will raise them up at the last day. It is written in the Prophets: ‘They will all be taught by God. Everyone who has heard the Father and learned from him comes to me.

The people in the crowd don’t get it.  They were trying to fit Jesus into their frame of reference. The crowd’s misunderstanding is understandable enough if they thought of Jesus as the prophet like Moses.  There was a popular belief that God would provide manna again in the final days.  This was connected with the hopes of a second Exodus.  Many people thought that the messiah would come on Passover, and that manna would begin to fall again.
The people in the crowd are stuck in their faith development.  They have hopes, based on their traditions, and they want Jesus to give them what they want:  manna from heaven, and a political leader to overthrow the Roman oppressors in a new Exodus.
In the first six chapters of John’s gospel, Jesus has encounters with several people and groups. Needy, troubled people come to Jesus, and they fail to comprehend.   Nicodemus thought Jesus was talking about being born again from his mother’s womb, when Jesus was talking about spiritual rebirth, being born from above.”
The woman at the well thought Jesus was talking about a drink of water from the deep well, when Jesus was talking about his presence that fills a thirst no earthly water can quench.
The man by the pool thought Jesus was talking about healing that would come from bubbling water stirred up by an angel, when Jesus was telling about healing that would come from him.
Jesus’ detractors think because they know who Jesus’ father, Joseph, was and where he came from, that he couldn’t be bread from heaven or give life to the world.
The crowd that followed Jesus regarded him as a teacher. They witnessed his miracles. They also knew him as one of their own, a man from the old neighborhood.  Some of them had watched him play as a child and learn his trade. In other words, they know him.  He’s a lot like them, so they can’t see how he can be all that special. They can’t believe he could be the one God sent to redeem them.

Now, when we read about people in Scripture behaving badly or failing to act faithfully, our first impulse may be to judge them. We tend not to identify with them.  We’d like to think that we would have known better than they did…that we would have done better.

And yet, consider the audacious claim that Jesus is making. Who ever heard of a God having anything to do with the ordinary, the mundane. If we believe in an all-powerful God who lives up in the clouds, it’s hard to believe in a God who is willing to suffer the pains and problems, the humiliations of human life. No wonder the crowd grumbles against Jesus’ words.
No wonder the leaders of the Jewish religious establishment was offended. To them, Jesus was making an audacious claim.  Claiming that he was the source of eternal life? They thought that was blasphemous. Claiming to be living bread that came down from heaven? Ridiculous! They can’t understand how he can make these kings of audacious claims about himself any more than they can understand why anybody would believe him.

Can we relate to any of this?
I hope we’ll ponder this prayerfully:  can we be bold enough, audacious enough, perhaps even foolish enough, to confess that God uses ordinary people and ordinary things to accomplish God’s will and to bring the world to God’s amazing love and God’s justice?
The bread Jesus is talking about is God’s gift. But we can only be nourished if we accept the bread that is offered.

Like the people in today's gospel story, we have a decision to make.  We can decide to follow Jesus and let God's presence and power direct our lives...    or we can ignore Jesus and spend our lives on other things.
We make this decision in big ways at confirmation...  or when we decide to join the church.  But we also make it every day in lots of little ways.
We make a choice every time we decide to listen to God's voice   or ignore it when it tells us that we're special...  God's beloved children… called as partners in Christ’s service.    We make a choice every time we hear God's voice calling us to love everyone---those who are close to us…and even strangers...  even our enemies.
Throughout the sixth chapter of John, in all the talk about bread, something has been said over and over which is the real offense behind all the other offenses.  In fact, it's the offense of the Gospel:     we have life by grace.  The bread God gives from heaven gives life to the world.
The conflict of the gospel is in how we choose to respond to God's gift.   The question we have to answer is this:  Do we determine our own lives...  or does God?
In every paragraph of this chapter of John, it's clear that the people around Jesus want to be in charge.  They demand that Jesus do what Moses did.  They demand signs.  They want proofs so that they'll have adequate reasons to decide that Jesus is really from God.  They want Jesus to be king-- the kind of king they wanted.
But, over and over again, Jesus keeps saying one thing:  life from heaven is a gift.    Trust this, and life is yours.
The message of the gospel really isn't so hard to understand.  It's hard to accept, because it cuts across all the calculations and achievements that we want to do to earn our salvation.
Every day, we need to choose.   Standing before God's amazing grace, how do we respond?
The good news in the gospel story is about grace...  about God's gift to us.   The bread in the wilderness was a gift.  The bread as word from heaven is a gift.
From the very beginning, God has been giving us of God’s self and inviting us to take this sustenance and use it as a source of being the light of the world on behalf of God’s kingdom.  God calls us to go out from our gatherings of prayer and praise to work in partnership with Christ to feed a hungry, hurting world. There are so many who are hungry…many who are hurting… many who are searching.
May we become a people that begin to extend life eternal… a people who live out the meaning of sharing in the life of Jesus to a hungry world.
May it be so!