"A Sense of Urgency." A sermon on Mark 1:14-21 from Littlefield Presbyterian Church on the Third Sunday of Epiphany. 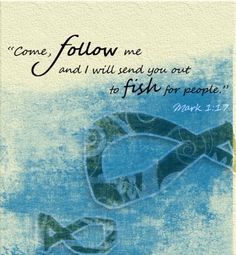 "A Sense of Urgency"


What would make you drop everything and pursue a whole new life?  A great job offer? An educational opportunity? The chance to make a difference?
Can you imagine picking up and leaving everything to follow Jesus?  I think, if we’re honest, most of us would find it really hard to leave work and family and friends and everything that’s familiar and safe to venture out into an unknown, uncertain future.

Right after Jesus' baptism, the Spirit immediately drove Jesus out into the wilderness.  He was in the wilderness forty days, tempted by Satan.  Then, after John the Baptist was arrested, Jesus came to Galilee, proclaiming the good news of God, and saying, “The time is fulfilled, and the kingdom of God has come near.  Repent, and believe in the good news.”
Turn.   Change.  Come and be a part of the kingdom.

Jesus sees some ordinary people working at their ordinary jobs, and he enlists them to help in his mission.  The way Mark tells it, they don’t seem to agonize over the decision.  Immediately, they leave their nets on the shore, say good-bye to their families, and they take off with this strangely compelling itinerant preacher who tells them of Good News and a new way of life and calls them to help him bring in the kingdom of God.
Follow me, and I’ll make you fishers of people.
Now, that would be a different kind of fishing for them.   It would mean casting out nets to gather people in to be part of God’s kingdom. The kingdom of God that Jesus proclaimed is manifest when human beings embrace God’s rule through repentance and faithful living, about a total re-orientation of our lives.
When Jesus called the Galilean fishermen to discipleship, he didn’t just ask them to add one more task to their busy lives.  He calls disciples into new ways of being… a new identity… a new way of living their lives in the world.  Jesus calls each of us to repent—to open ourselves to transformation of our relationships, work situations, social commitments, and political allegiances and our church communities.
We may not all be called to leave our occupations and families and homes behind. But all of us are called to look at our own lives through the lens of the gospel of Jesus Christ and allow them to be shaped and transformed by the values of the kingdom of heaven.
Every Christian has a calling—a vocation to serve Christ wholeheartedly in whatever occupation, or network of family relationships or context in which we have been planted.

Jesus called Simon Peter and Andrew and James and John by name, but he didn’t call them to be individual disciples.  He called them together to form the basis of a new community.   The little band of disciples formed a community right from the very beginning – they were already becoming the church.
The community the New Testament calls, in the Greek, ecclesia, literally means “called out.”  The church is a called-out community whose purpose is to exhibit the kingdom of God to the world."   We, the church of Jesus Christ, all of us, are the "called out" people of God.
Peter, Andrew, James and John were not called just to hang with Jesus and enjoy his company.  The church today isn’t called together to enjoy each other’s company and be comfortable together.   A congregation that’s focused only on its inner life and on survival has forgotten why it exists.

You may have heard the parable of the little life-saving station, but I think it bears repeating.  On a dangerous seacoast where shipwrecks often occur there was a once a crude little life-saving station.  The building was just a hut, and there was only one boat, but the few devoted members kept a constant watch over the sea. With no thought for themselves, they went out day or night tirelessly searching for the lost.
Many lives were saved by this little station, so that it became famous. Some of those who had been rescued, and various others in the surrounding areas, wanted to become associated with the station and give of their time and money and effort for the support of its work. New boats were bought and new crews were trained. The little life-saving station grew.
Some of the new members of the life-saving station were unhappy that the building was so crude and so poorly equipped.  They felt that a more comfortable place should be provided as the first refuge of those who were rescued from the sea.
So, they built a bigger building and replaced the emergency cots with beds and got nicer furniture.  Now the life-saving station became a popular gathering place for its members, and they re-decorated it beautifully and furnished it as a sort of club.
In time, there were less of the members who were interested in going to sea on life-saving missions, so they hired life boat crews to do this work. The mission of life-saving was still given lip-service but most were too busy or lacked the necessary commitment to take part in the life-saving activities personally.
About this time, a large ship was wrecked off the coast, and the hired crews brought in boat loads of cold, wet, and half-drowned people. They were dirty and sick, and some of them had dark skin. Some of them spoke strange languages. The beautiful new club quickly showed signs of damage and wear-and-tear from all the people. So, the property committee immediately had a shower house built outside the club where victims of shipwreck could be cleaned up before coming inside.
At the next meeting, there was a split in the club membership. Most of the members wanted to stop the club's life-saving activities and focus on their comfortable club activities with each other. Some members insisted that life-saving was their primary purpose and pointed out that they were still called a life-saving station. But they were finally voted down and told that if they wanted to save the life of all the various kinds of people who were being shipwrecked in those waters, they could begin their own life-saving station down the coast. And so they did.
As the years went by, the new station experienced the same changes that had occurred in the old. They evolved into a club and yet another life-saving station was founded.
If you visit that seacoast today, you will find a number of exclusive clubs along that shore.  Shipwrecks are still frequent in those dangerous waters, only now most of the people drown.
We have a mission in the world. As theologian Emil Brunner said, "The church exists by mission as a fire exists by burning."

For the first disciples, it was costly to follow Jesus.  Jesus and his gospel challenged a lot of their understandings about family and society--even about faith. It threatened the systems of privilege, patronage, and loyalty to the emperor.  All of the values and institutions that seemed to be fixed realities were called into question by the Christian vision of a new way of being in the world--a world in which there would no longer be "slave or free, Jew or Gentile, male or female, because all are one in Christ Jesus."[1]
Jesus calls us, and the call challenges our center of gravity and wants to shift it from being centered on ourselves to God’s call—God’s dream for us and God’s world. It can be a real adventure in faith.
In Tolkien’s The Fellowship of the Ring, the wizard Gandalf urges the hobbit Frodo Baggins to leave behind his comfortable existence and set out on a quest.  Frodo resists, saying, “We are plain quiet folk, and I have no use for adventures. Nasty, disturbing, and uncomfortable things.” ` If you’ve read the books or seen the movies you know that Frodo does leave his comfortable hobbit hole and goes on a great adventure, and it changes his life completely.

Some of the financial and other challenges this congregation has faced over the past few years threw us off center for a while.  It’s easy to get so thrown off-center that we could forget why we exist, turn inward, and focus on survival.   That’s why we’ve spent time over the past few years working on our mission statement and core values.  That’s why we need to keep discerning God’s will for us.

Jesus calls us to follow him.  So, we need to be praying for God’s guidance and power.  Pray for the courage we need to look at our context and challenges and possibilities.  Pray that we will trust in God to provide whatever it is we need, as we cast out the net of God's love and bring in those who need to know God's love and acceptance and healing.
Pray for our leaders, that they will be strengthened to lead the congregation with love and energy and imagination.   Pray that this community will be energized to deal with the kind of changes we need to make in order to go fishing with Jesus.
Have you heard the good news?  The kingdom of God is near.    Jesus calls ordinary people like you and me to help bring in those who are sick and afflicted, those who need to hear the good news.
Follow me, Jesus says.  Follow me.